The dancehall community is reacting to Vybz Kartel losing his appeal case, and some fans are now blasting his defense attorney, Valerie Neita-Robertson.

Social Media erupted last night when it was announced to the public that the results of Vybz Kartel’s appeal would be revealed on Friday, April 3, 2020. Fans went crazy, predicting the best outcome and how they would react if the deejay were released. Others weren’t so enthusiastic about the appeal as they expressed distrust in the whole “Free World Boss” mania. One fan commented on YouTube via Terro Don’s Channel “dem nuh wah see ghetto utes have so much power, dem nah let him out,” he predicted.

Whatever the circulating opinions were, it was clear that everyone was counting down the hours until the fate of The World Boss, The Teacher, The King of the Dancehall, all monikers of Vybz Kartel, was handed down.

As day broke, the anticipation grew even more as it was also announced last night that the event would be Livestreamed. We woke to a Jamaican social media geared towards viewing only one thing this morning. Many digital footprints went towards the historical happening, but there was, unfortunately, no fairy tale ending.

The location of the live stream was in the office of one of Vybz Kartel’s senior defense attorneys, Valerie Neita-Robertson. She had her phone on speaker while talking to the powers that be who were tasked with handing down the decision. The comments of the fans tuning in to the Livestream at first were filled with optimism. It’s almost as if I could hear fans chanting “Free World Boss” behind every phone screen.

However, the faithful moment when the verdict was released saw fans in denial and disbelief; some might even call it shock. A popular social media figure wrote, “a wah sumaddy shoot the BBC judge an all a uno,” he said. Rygin King wrote “KMT,” while Sanjay simply went with multiple crying emoji’s. Picture those comments mirrored by thousands of other people on the same live stream. It was like everyone on the stream was on the deejay’s side, if only they could free Kartel themselves. 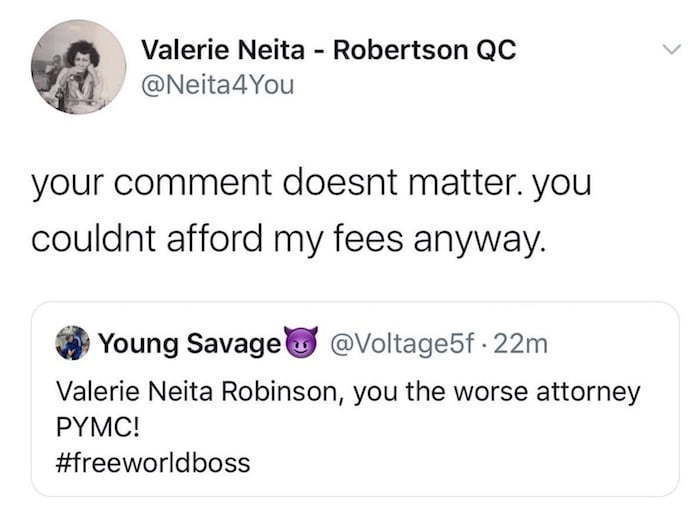 The reality started to sink in shortly after, and all of the optimism had traded for sadness and contempt for the justice system. Conversations about this will carry on into the next week and beyond, “Kartel gwaan wul it, jah know mi DJ” said another fan on social media. The period from last night to this morning is definitely what they refer to as an emotional roller coaster.

Fans were first extremely excited about the possibility of Kartel’s release only to be pegged back by the actual decision, which revealed he would remain imprisoned. Their reaction is as expected, though. They are disappointed, annoyed, frustrated, and some even heartbroken. Those who thought Vybz Kartel deserved his fate are also a part of the conversation and made their statements as well. One viewer wrote, “If yuh do di crime do di time mi g.”

Today highlighted one important thing though, the world tuned in to see the outcome of Kartel’s case today, and no matter how they felt about the verdict, I observed that it impacted us all and not just Adidja Palmer and his co-accused.