Can you take a minute to remember that one friend that always finds a way to crack a joke and troll you no matter what you are facing? Now that the picture is locked in your memory bank, it would be the perfect way to show that even celebrities face the same thing in their little circle. The Canadian king Drake, better is known as the 6 God, knows exactly what it feels like as he was trolled by fellow countryman Tory Lanez. The clowning comes after Drake posted a photo of himself sporting a pensive but sad look.

Drizzy only left a sad, crying emoji in the captions, which left curious fans to wonder what could have caused such long faces among the three men captured in the photo. A few of Drake’s followers threw out a few explanations for his appearance. However, it was Tory Lanez who dropped one of the funniest comments.

“When u said u tested negative for corona but u tested positive .. and only u know,” penned Tory Lanez while dropping a few laughing emojis. 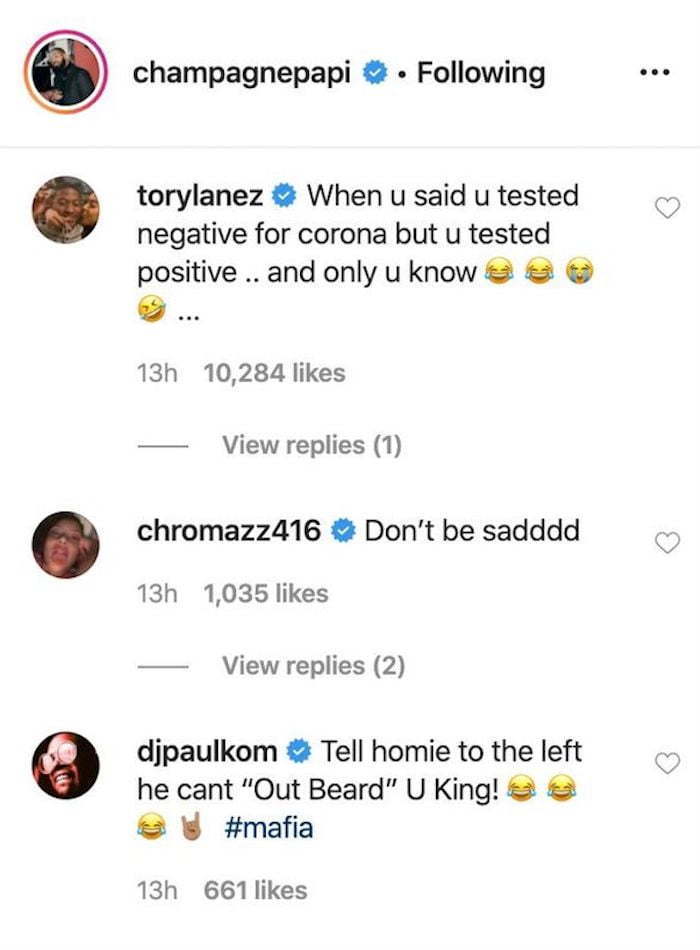 As of March 24, 2020, the United States has recorded over 54,808 cases, with 775 coronavirus related deaths. The country saw one of its deadliest days last Monday, recording over 100 deaths nationwide. Amidst the recent worldwide outbreak of the coronavirus, many celebrities have tested positive for the disease. One celebrity who tested positive for the virus is Brooklyn Nets forward Kevin Durant. Durant and Drake were hanging out together only days before the b-ball player got his diagnosis.

After completing tests, Drake got the green light that he was coronavirus free. The rapper has been practicing proper self-quarantine measures since then, laying low at his house. He took some time to hop onto his Instagram to show off his massive Nike footwear collection, which includes a pair of unreleased Dior x Air Jordan.

In recent weeks Drake has confessed that he is working on his new album. The current quarantine could spell more time for Drake to work on the project. Hopefully, this means the album will be available even sooner than Drake eventually projected.

Tory Lanez is also gearing up to drop his mixtape, New Toronto 3, sometime this month.