Lil Uzi Vert has a new album on the shelves, but people are talking about the cover art more than the music itself.

Eternal Atake is the long-awaited follow-up to Lil Uzi‘s 2017’s “Luv Is Rage 2”. There are 18 tracks on the album, divided into three parts which all represent a different aspect of the rapper’s personality: Baby Pluto, Renji, and Lil Uzi Vert. A week before the album dropped, Lil Uzi posted three possible cover art images and asked his Twitter followers to choose which one they liked best. The winner was a drawing of three women looking at earth from another planet. The original, cover art was a take on the Heaven’s Gate logo, with the surviving members of the religious cult threatening to take legal action against Lil Uzi if he had it.

It is now another cover art that has gotten the Philadelphia artist into trouble. The single from the deluxe version of Eternal Atake titled “That Way” possesses the image of a man nailed to a giant orange heart through an orange beam that goes through his chest. A Korean artist who goes under the social media alias hugeriver8 claims that the picture was a plagiarised version of something he created in 2014. 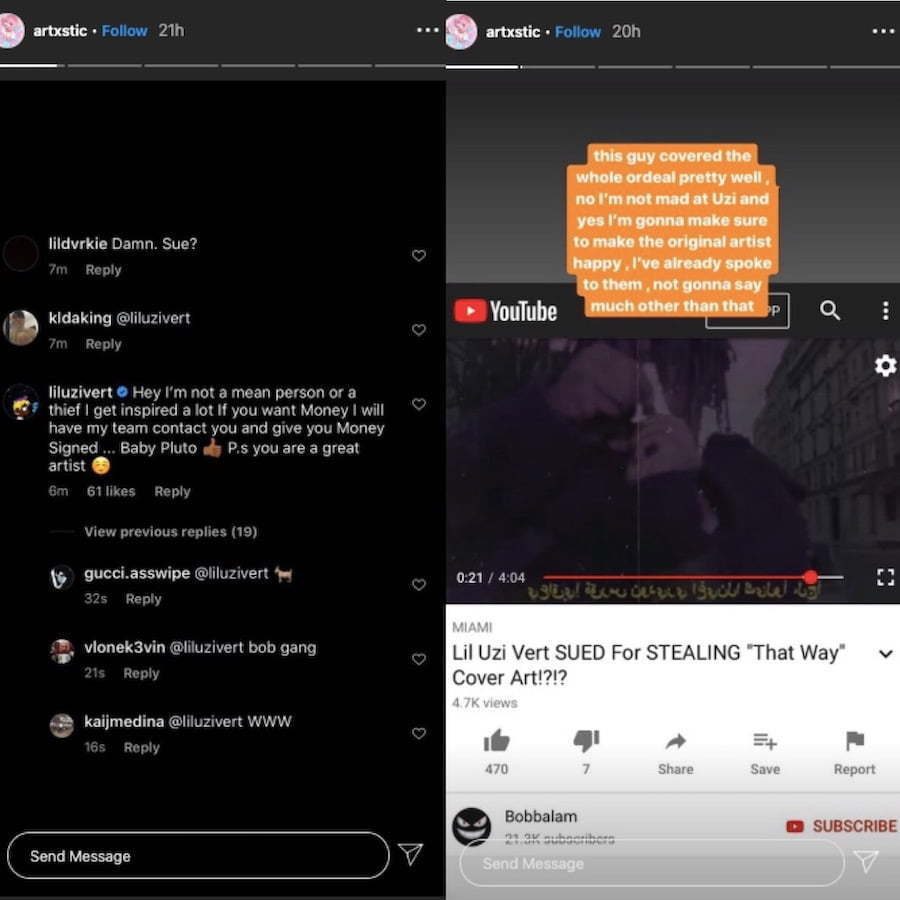 Sharing a side-by-side image of the two artworks to demonstrate the similarity, the artist wrote, “My picture was posted on my blog six years ago, and it is possible to use it for profile pictures or non-commercial purposes, but it is not allowed to use anything else.”

Lil Uzi addresses the matter in the comments on hugeriver8’s IG post. “Hey I’m not a mean person or a thief I get inspired a lot,” he wrote. “If you want Money I will have my team contact and give you Money. Signed… Baby Pluto. P.S. You are a great artist.”

The original artist is now going to get paid.

I am very upset that I have to write such an article. I saw lil uzi vert's latest album cover art and it was very similar to my painting. My picture was posted on my blog six years ago, and it is possible to use it for profile pictures or non-commercial purposes, but it is not allowed to use anything else. Now I'm very embarrassed and don't want to let this go. #liluzivert #liluzi #thatway #album #cover #art #painting #artist #plagiarism #????? #??? #?? #???