Nicki Minaj dropped more hints on Twitter that she’s pregnant and her fans, aka Barbz, are already pitching her baby names.

Nicki Minaj has fans sure they can read between the lines after a couple of mysterious social media posts have refueled pregnancy rumors. The “Yikes” rapper took to social media on Sunday to post an Instagram story that was simply the red heart emoji followed by the praying hands emoji. She later posted a slightly out-of-frame shot on Instagram of her and her husband, Kenneth Petty. The post also included the same set of emojis from her Instagram story.

When a fan tweeted Nicki, asking, “I wonder what the emojis are for, what you celebrating.” Nicki replied, “Life,” followed by the prayer hands, balloon, and heart face emojis. Minaj has always talked about wanting to start a family someday, and now that the rapper has settled down with Petty after a private ceremony in October, fans were already hoping for a pregnancy announcement any day now. 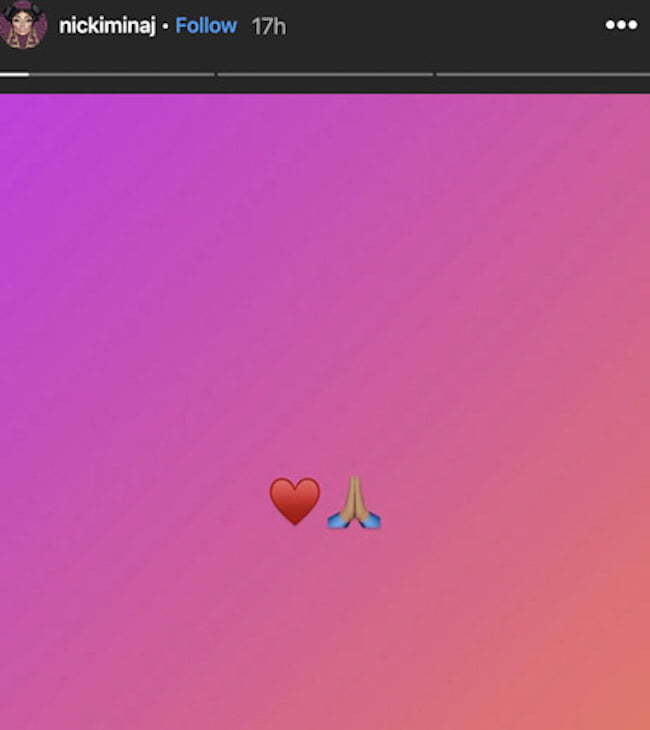 Speaking on her radio show last year, Minaj said, “I’m not saying I’m pregnant. That’s the end goal. I think I have what I was striving for, just happiness.”

The couple is planning a larger wedding ceremony for later this year, although those plans may be pushed out if the pregnancy rumors prove correct. Despite Nicki not mentioning a pregnancy directly or confirming any questions in the comment section, fans are so certain that Nicki is with child, they are already picking names and genders.

One Twitter user wrote, “NICKI MINAJ JUST ADMITTED SHE’S PREGNANT, WHAT WE NAMING THE CHILD YALL? I vote Fendianna.” Another commented, “SHES PREGNANT!!!!! Finally we meet NICKI’s SON.” At this point, only time or Nicki herself can confirm if the rap star is expecting.