Reginae Carter pulled off a Keke Palmer in her apology to 21 Savage on behalf of Lil Wayne, who admitted he thought 21 was a rap group.

Lil Wayne likes to keep to himself these days, only making media appearances on rare occasions to promote his new music. Luckily for Weezy fans, Mr. Carter dropped his thirteenth album this week, titled Funeral, and is granting unusually in-depth interviews to promote the project. Speaking with NORE and DJ EFN on Drink Champs, Wayne discussed a wide array of topics, including his time with the Louisiana group Hot Boys as well as his more recent legal issues with Birdman and Cash Money Records.

However, when asked about more recent happenings in hip-hop, Weezy admitted that he isn’t paying attention and has a hard time remembering who new rappers are. During the interview, Wayne recalled talking about 21 Savage, saying, “When they asked me [about him] I said ‘They got 21 f**king lil rappers in one group?’ I was so serious. I was like, ‘Man, that’s like a new Wu-Tang, right?’”

He explained that he went on to meet 21 Savage in person and now understands who he is, but that anecdote gave fans some insight into where Wayne’s head is at these days. It seems that unless it concerns sports news or his own music, he could care less.

Hopping into the comments section of TheShadeRoom’s post about Lil Wayne’s obliviousness, his daughter, Reginae Carter, laughed at the interview, saying, “Oh wow! Sorry to those men! Don’t mind my father.” It seems Reginae was referencing a popular Keke Palmer meme when she apologized to Dick Cheney for not recognizing him in a picture. 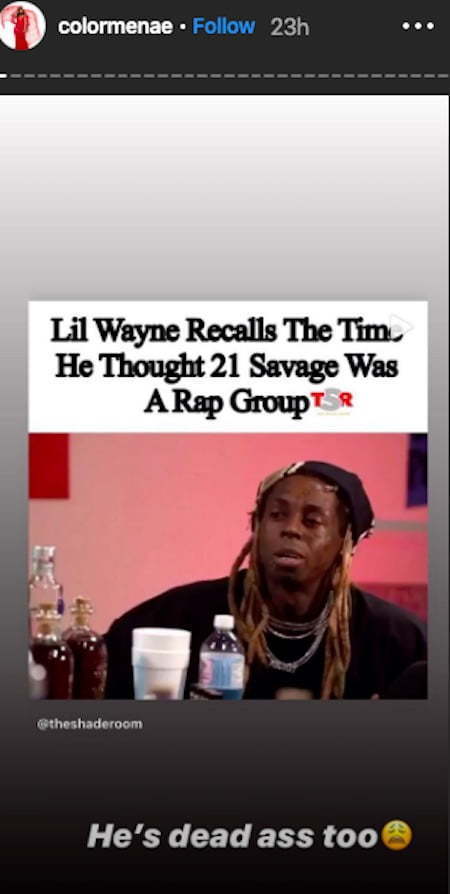 Reginae also posted on her own Instagram story and assured her followers that her father is “deadass, too” when admitting that he doesn’t know what he’s talking about when it comes to new music and current artists. Even if Wayne is a little out of touch, his fans still consider him the best rapper alive and probably don’t think he needs to be paying attention to anyone else anyway.