Drake is only one song away from having the most charted records in Billboard Hot 100 history.

For a very long time, the cast of Glee was the proud record holder for the most charted songs on the Billboard Hot 100 chart. Now Drizzy has tied them for a whopping 207 entries and is looking forward to taking the title very soon. Interestingly, Drake, when he was a young actor, was on a show that would rival Glee in ratings. Who would have thought that he would have gone on to rival their longstanding music record as well?

Drake and Future collaborated on a recent single called “Life Is Good,” which already went Gold in the US since its release on January 10th. The song debuted at no. 2 on the Billboard Hot 100 chart this week, making it Drake’s 207th song on the chart. Not only did the song earn him a record tie for most entries in the history of the chart, but it was also his 100th top 40 single on the coveted chart as well extending his lead for that record and also making him the very first artist ever to reach this milestone. 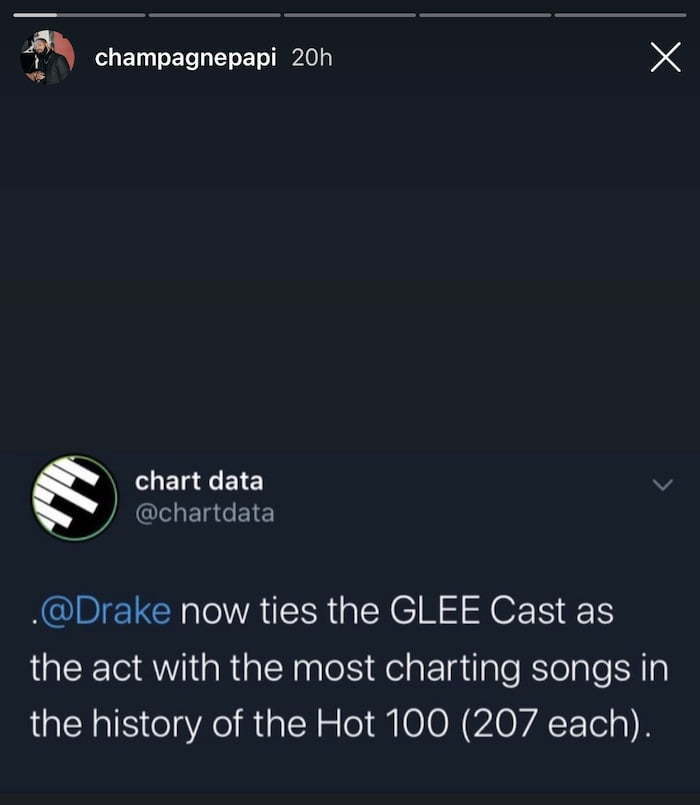 Drizzy has also now earned his 36th career top 10 hits on the chart, which is only second to Madonna’s 38. This means he will most likely soon hold the record for most top 40 hits, most top 10 hits, and most entries on the chart overall.

The rapper took to Instagram after hearing the news to share a short video in which he simply said, “One more. Gleefullll.” The rapper has been working on his next project for some time now, so it’s expected that it will probably be the biggest record of his career with all the records that it will inevitably shatter.

When Drake surpassed the Beatles record for second-most top 10 hits on Billboard in August 2018, he had an image of the iconic group tatted on his forearm. Do you think Madonna will be inked next?

Drake via his IG story. ? pic.twitter.com/Pz8mKFZ6es