The Chronicles of Gucci Mane and Keyshia Ka’oir in Jamaica continues.

As we previously reported, Gucci Mane and his Jamaican wife are currently enjoying the Christmas season on the beautiful island of Jamaica, where she was born. As the happily married couple are going around seeing different parts of the country, they cannot keep the excitement and fun off the gram. Recently Gucci shared a video of himself pool surfing at their hotel in Ocho Rios. Today the rapper shared another video, but this time his environment was much more raw and uncut than the resort property.

In the most recent and possibly most hilarious video Gucci shared on Instagram, the rapper is dressed in a wool merino in traditional rasta colors, which is red, gold, black and green like the Ethiopian flag. The rapper is also disguised in a matching yellow wool hat with dreadlocks hanging out. The video shows Gucci walking on the streets of Ochi with two paper bags in his hands filled with Jamaican patties. As he travels through the town on foot, several people who walk past him do a double take as if they’re questioning what they just saw. 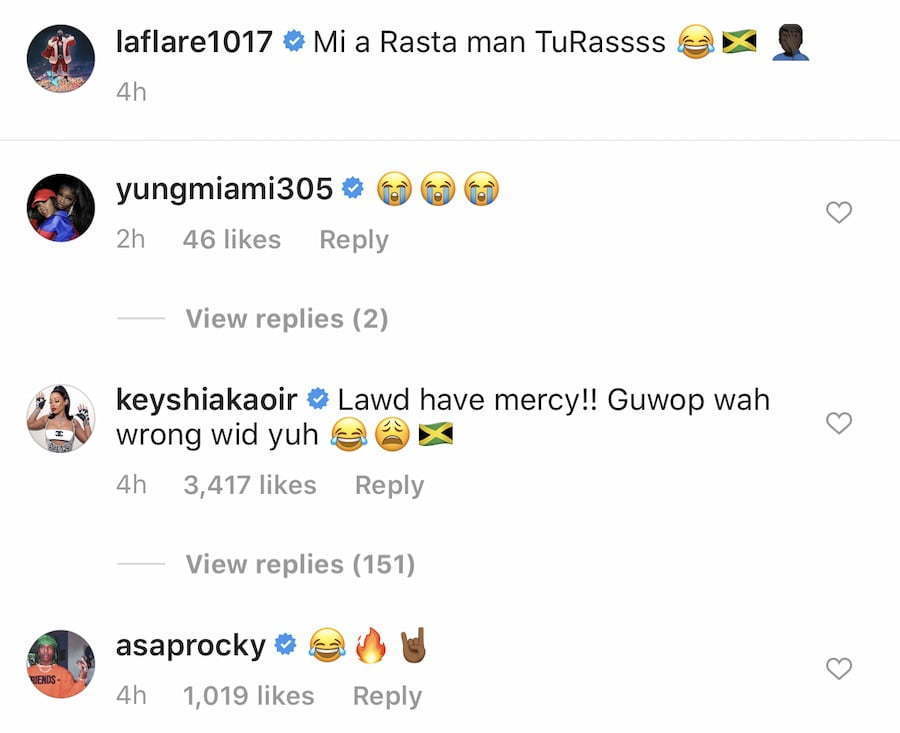 A$AP Rocky, Yung Miami, and Keyshia Ka’oir are among the celebrities reacted to the video with some crying laughing emojis.

The funny clip has been getting a lot of reactions online from fans of Gucci, including Jamaicans, who found it hilarious. Gucci Mane captioned the post “Mi a Rasta man TuRassss,” he wrote. As usual, his wife also reacted in the comment section, which added to the hilarity of it all. “Lawd have mercy!! Guwop wah wrong wid yuh,” Keyshia Ka’oir wrote.

The couple has obviously been enjoying their stay in Jamaica this festive season. They have shared several videos and photos from their trip, and it appears that Gucci has even recorded Jamaican inspired music since he’s been in the country. It looks like we have more to look forward to as the Chronicles of Gucci Mane and Keyshia Ka’oir in Jamaica continues.