Tay-K, whose real name is Taymor Travon McIntyre, was only a minor when he was arrested and tried as an adult for the murder of 21-year-old Ethan Walker. He was first arrested back in July 2016, along with six accomplices. The rapper notoriously cut off his ankle monitor and went on the run. While on the run, he released his breakthrough song “The Race.” It was apparently a key factor in his conviction due to the content of the lyrics. The track peaked at number 44 on the US Billboard Hot 100 and in January of 2018 was certified platinum by the RIAA. The rapper’s sentence was handed down this July after a lengthy trial, and although he was not the actual shooter of Ethan Walker, he was found guilty for his involvement and sentenced to a whopping 55 years in prison and was also asked to pay a fine of $21000.

Earlier this week, former Dallas police officer Amber Guyger was found guilty of fatally shooting her neighbor Botham Jean and was subsequently sentenced to 10 years in prison. According to reports, Amber shot him in his own apartment but stated she thought she was in her own apartment and Botham an intruder. Over the course of her trial, social media posts, and texts in which she exhibited violent and racist behavior were presented as evidence sparking many to state that she was given a far too lenient sentence. 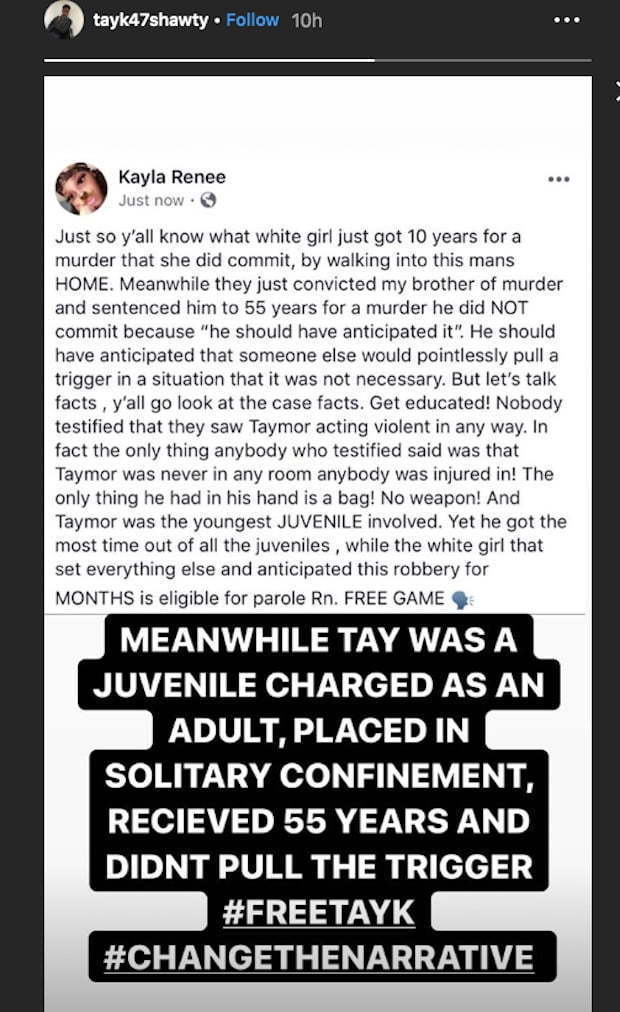 Tay-K’s sister took to Facebook to pen a note marking her anger and frustration with how his case was handled. “Just so y’all know what white girl just got 10 years for a murder that she did commit, by walking into this man’s HOME. Meanwhile, they just convicted my brother of murder and sentenced him to 55 years for a murder he did NOT commit because ‘he should’ve anticipated it.’ He should have anticipated that someone else would pointlessly pull a trigger in a situation that it was not necessary. But let’s talk facts, y’all go look at the case facts. Get educated!” she wrote.

She went on to add, “Nobody testified that they saw Taymor acting violent in any way. In fact the only thing anybody who testified said was that Taymor was never in any room anybody was injured in! The only thing he had in his hand is a bag! No weapon! And Taymor was the youngest JUVENILE involved. Yet he got the most time out of all the juveniles , while the white girl that set everything else and anticipated this robbery for MONTHS is eligible for parole Rn.”

The message was also re-posted on Tay-K’s Instagram Story with the caption, “Meanwhile Tay was a juvenile charged as an adult, placed in solitary confinement, received 55 years and didn’t pull the trigger #FreeTayK #ChangeTheNarrative.”

Tay-K’s fans have been voicing their agreement with his sister’s statements. One fan stated, “Tay K was like 15 when all that s**t allegedly happened and they gave him 55. Amber Guyger was an adult deemed competent enough to handle a firearm by the state of texas & she straight up broke into someone’s home murdered them & got 10 years.” Another fan went on to add, “This banging again? Good. F**k Amber Guyger she gets 10 an a good chance for appeal for a murder she did commit and Tay-K gets 55 for a murder he didn’t commit in the same state.#FREETAYK till it’s backwards.”

Tay K was like 15 when all that shit allegedly happened and they gave him 55. Amber Guyger was an adult deemed competent enough to handle a firearm by the state of texas & she straight up broke into someone's home murdered them & got 10 years.

Tay-K’s family is hoping for an appeal of his lengthy sentence, and fans are asking for him to be released from prison immediately.

They don’t even actually know if Tay K killed, and he gets 55 years yet this white woman actually did kill an innocent black man and gets 10 years, for the same crime, in the same state.. #FREETAYK

Ok so she was wrong but she also didn't blast a videographer, beat up and old man, and kill someone during a robbery. Then record a song and music video glorifying the fact she was on the run. So her and Tay-K aint the same.