Dancehall is quickly becoming one big battling arena. And the latest participant is none other than Bounty Killer who took a hit at deejay Alkaline recently.

It seems that Alkaline cannot catch a break. What this man has done to everyone, I do not know. But the artiste seems to be involved in quite a number of beefs. His current back and forth with 6IX leader, Squash, has seen many diss tracks being produced. The war seems never-ending even when both parties have been memorialized in death announcements and funeral programs. And it is to the point now where Chronic Law has been tagged in to assist the 6IX Camp.

Alkaline’s long-standing beef with Popcaan also seems it will never end as it has been going on for years and just a few weeks ago Squash injected Popcaan into the mix with a video of him calling Alkaline a “b**yman”. Alka also has bad blood with legendary lyricist Vybz Kartel who put Alkaline in his place for using his “Don” title previously.

Now the Vendetta Boss can add Bounty Killer to his long list of haters. A meme of the Warlord was posted on social media with him saying “YYYACK!!!” The question posed to by one fan to Bounty was this, “Suh @grunggaadzilla if alkaline drop an album, you buying a copy of it?” To which Bounty responded, “I don’t buy toilet papers,” followed by three laughing face emojis. 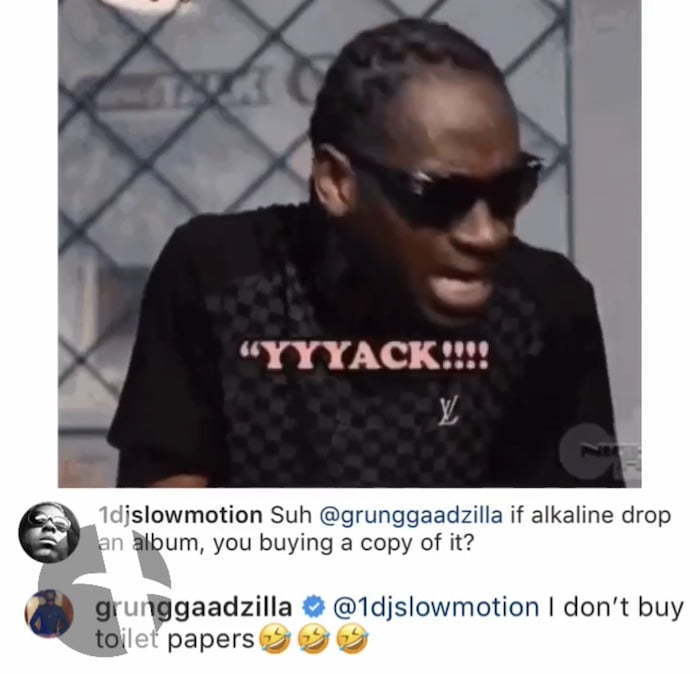 Alkaline, however, has no shortage of fans and they did not hesitate to attack Bounty for his comment. Hundreds of fans straight up slaughtered Bounty Killer with many questioning his relevance in dancehall today as well as ridiculing him for his own name which is a popular toilet paper brand.

One fan commented, “How ironic n a u name bounty fava idiot” Another fan added, “If this ain’t some hating ass sh*t, Idk what is. I wonder what this young man has done to all these people.”

While another fan commented, “Old head dem always hate di youths dem from ever since. If u nah mek dem son u dem seh u hype. Alkaline rise above all a dat and mek a name fi him self. Youngest and di baddest! Yuh nuh affi like him but u Affi respect him”

Despite all the hate Bounty is receiving he seemingly isn’t affected as he responded to all the backlash by stating, “Bredda no time for the virtual fans they don’t even goes to parties much less shows they just sat at home on the computer and type sh*t b**ty washers sadamites and freakazoids chuck through.”

For one to respond to fans with such anger Bounty must have some deep-rooted hate bottled up, and it now seems to be spilling over.