Meek Mill is under fire from Nicki Minaj fans for cropping her out a photo.

The Philly rhymer has a new beef on his hands, and it’s not with another rapper. Actor Michael Rapaport managed to get under Meek Mill’s skin when he went on a Twitter tirade on Monday. Now Nicki Minaj is being drawn into the brouhaha between the two because of this photo that Meek posted on Twitter in which he cropped her out and labeled her as anonymous.

Rapaport first posted the original photo on Twitter where he didn’t crop out Nicki. “All Hip Hop Bloggers & Culture Critics Who Know all about Hip Hop but have Know Idea who Sparky D is, not one of you is on my level with any of this sh*t,” he tweeted.

Meek Mill responded to that tweet but cropped Nicki out the photo. “Me: ayo yo who this? Anonymous: I think it’s the guy from white men can jump? Him: Meek you so fire you give me that feeling what hip hop is missing ima fan “can I get a selfie”? Hurry up go head,” Meek wrote while relaying the exchanged that took place between the three of them at an NBA game. 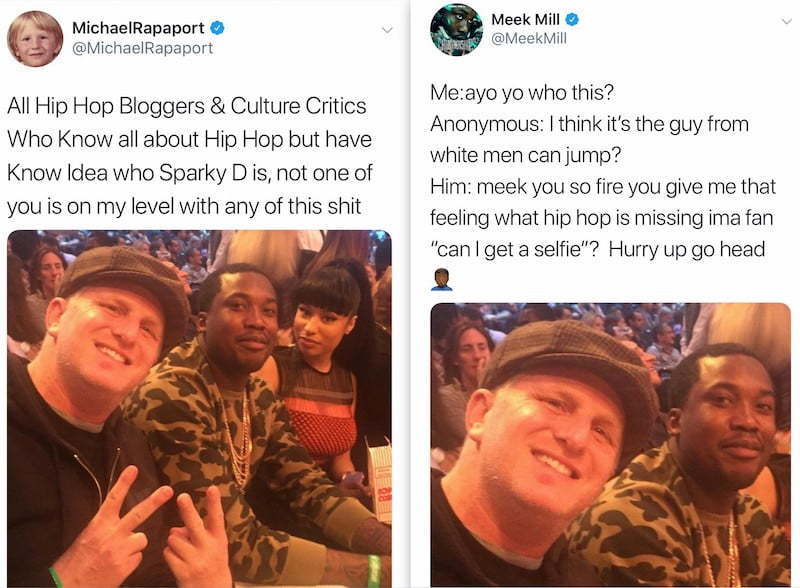 It appears the photo was taken between 2015 and 2016 when Meek Mill and Nicki Minaj were dating. Her fans, aka Barbz, are now calling out the “Championships” rapper for cropping her out the photos.

“Meek cropping Nicki out the photo like we all don’t already know who is in the pic and who is anonymous. Rapaport is right you’re a trash rapper,” one fan wrote while another added, “Meek crop game is strong but you still a trash rapper who is not even top 20 in Philly lol.”

In all fairness to Meek, Nicki previously cropped him out of photos, and this could also mean that he doesn’t want to get her involved in his beef.