Vybz Kartel appeal reached high drama in court this week when the defense attorneys put the trial judge in the hot seat.

Arguments for Vybz Kartel and his co-accused appeal trial were presented in the Jamaica Court of Appeal this week. The dancehall icon was represented by Queen’s Counsel Valerie Neita-Robertson who rips into trial judge Justice Lennox Campbell for handing down several inappropriate rulings in the 2014 murder trial. Neita-Robertson calls the judge bias against her client and that put him at a disadvantage that may have lead to his murder conviction.

For starters, the defense team argued in court this week that the judge should’ve declared a mistrial when he found out about one of the juror’s corrupt intent. Juror Livingston Caine was arrested in court on the last day of the trial and slapped with corruption charges for allegedly trying to bribe the forewoman and other colleagues with $500,000 in return for a not guilty verdict.

Neita-Robertson also argued that Justice Lennox Campbell misquoted the evidence, failed failed to instruct the jury correctly, and gave a bias summation of the evidence. “A judge is not entitled to sum up the evidence in a way that it appears unbalanced,” the veteran trial lawyer said.

Neita-Robertson says Justice Lennox Campbell, in his summation, pointed out the main witness evidence where he said the murder victim, Clive “Lizard” Williams was lying motionless on the floor. “Imagine that: he had walked into the room on his own two feet,” the judge said. The attorney argued that the judge’s comments were speculative and prejudicial to the case against her client and was suggesting that there was some new discovery regarding Lizard’s motionless body on the floor.

Vybz Kartel, real name Adidja Palmer, Shawn “Storm” Campbell, Kahira Jones, and Andre St John, were convicted of murder in March 2014. The four men were given life sentences with Vybz Kartel becoming eligible for parole after serving 35 years. The defense argued that the sentencing handed down by the judge was excessive.

Valerie Neita-Robertson also turned her attention to the damning cell phone evidence. During his arrest, Vybz Kartel and his co-accused phones were seized by cops. One of the phones belonging to the dancehall deejay sent out a text message weeks later that stated that Williams body was chopped “fine fine” and disposed of at sea. The defense team thus accused the police department of tampering with the evidence and requested it to be omitted from the trial. The judge ruled to accept the tainted cell phone evidence in the case and in his summation he inserted himself into the mix. 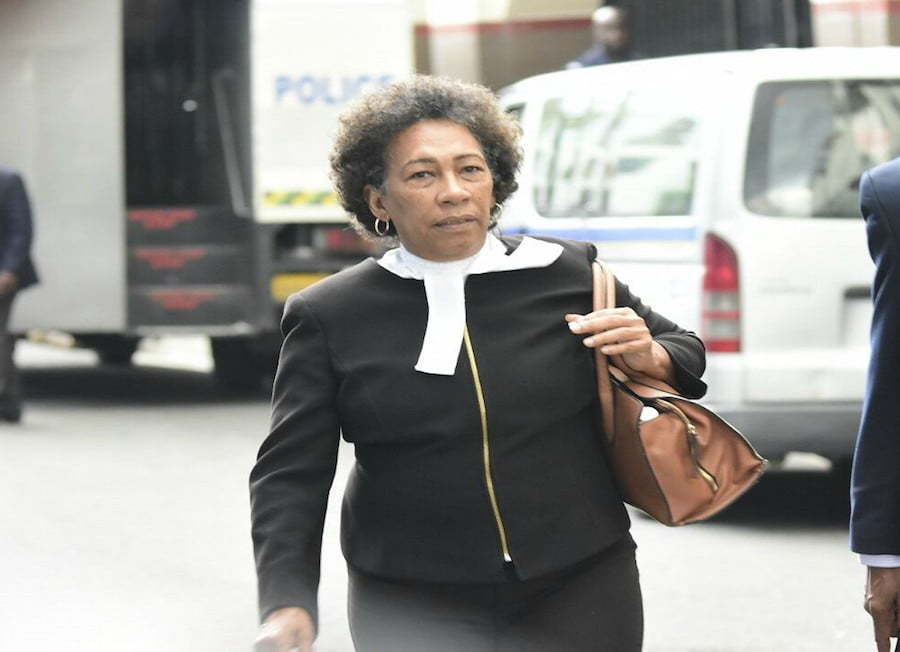 During his summation of the evidence relating to the cell phone text message, the trial judge started off saying “This is what we are saying.” The judge then told the jury that the author of the text message would’ve known that Clive “Lizard” Williams was dead later painted a picture that the police could not have sent the message. This, Neita-Robertson said, is a blatant attempt by the judge to “crafted out a view to show that the police could not have interfered with the text.”

Neita-Robertson also pointed out several occasions where she thinks the judge made comments that were prejudicial and other occasions where he failed to make the right judgment call when issues arose during the high profile murder trial.

On Tuesday, Vybz Kartel’s former protege Vanessa “Bling” Saddler was tossed right back into the murder case when the defense team questioned why the prosecution introduced evidence pertaining to her in the case. Neita-Robertson also argued that the prosecution introduced evidence relating to text messages that Clive Williams allegedly sent to his girlfriend after the alleged murder. She argued that the judge accepted these evidence without the proper groundwork and without these witnesses being called to testify.

Neita-Robertson argued that on the final day of the trial, the judge sent the jury to deliberate at 3:42 PM, which is beyond the standard rule that the jury should not be sent for deliberations beyond 3:00 PM to avoid a scenario where they would rush to reach a verdict. Let’s also not forget that this was the longest murder trial in Jamaica’s history.