Meek Mill and Nicki Minaj will be sharing the same stage for the first time since their split.

Meek Mill and Nicki Minaj are among the star-studded lineup for the 2018 Made In America festival in Philadelphia. The former couple parted ways in December 2016 and have neither spoken to each other or perform on the same stage together. In fact, their split was so bitter that they regularly took shots at each other on social media leaving fans to believe that there will never be a reunion. Perhaps Eminem will swoop in and snatch her up before Meek even gets a chance to shoot his shot again.

Nevertheless, it will be interesting to see how the two rappers handle performing at the same show. The Made In America Music Festival is a two-day event so perhaps they will both be performing on separate days.

Other artists on the lineup include Post Malone, who co-headline the show with Nicki Minaj, Diplo, Miguel, Janelle Monae, Fat Joe, Zedd, 6lack, Alessia Cara, Ty Dolla $ign, Rich The Kid, Jessie Reyez, Lil B, Gunna, BlocBoy JB and more. So hip hop fans will have a lot of choices in artists to see perform live. 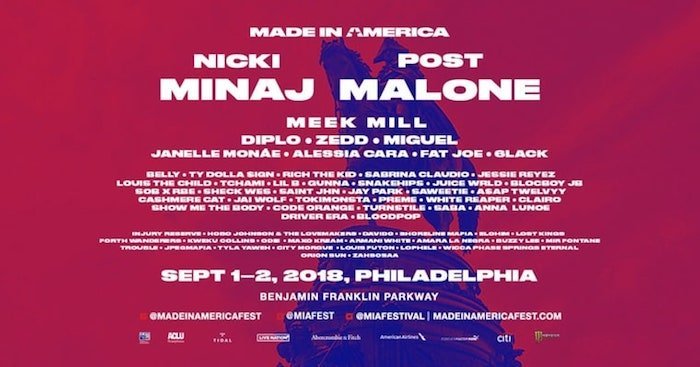 JAY-Z, who is the principal promoter behind Made In America, is noticeably absent from the lineup. However, he and Beyonce will be performing in Philadelphia for their On The Run II tour on July 30th.

Meek Mill and Nicki Minaj started dating in the fall of 2014 following her split with Safaree Samuels, whom she dated for over a decade. The couple, code name Omeeka, dated for two years before breaking up at the end of 2016.