Vybz Kartel is far from being done dropping new music. The aced dancehall star will be dropping a new song “All Aboard” this Friday.

Kartel has been dropping around two songs a week since around the end of August and he is showing no signs of slowing down. Our Gaza sources told us that a major project is on the way but in the meantime, fans can enjoy a regular supply of new singles. “We are working on a big project, some big, much bigger than any previous album Worl’Boss release,” sources said. “Look out for a new banger this Friday on premiere on Irie FM.”

The incarcerated deejay also announced the new single “All Aboard” on his Instagram page. The track was produced by TJ Records, who is also the producer behind his new project. The track will be premiered by DJ Wayne on Irie FM on Friday afternoon. “LISTEN NOW.. You either ON the boat with the ballers n b**ches… or you UNder the boat with the sharks n fishes! #Dj Wayne premier this Friday on #IRIEFM ALL ABOARD ALL ABOARD,” Vybz Kartel wrote. 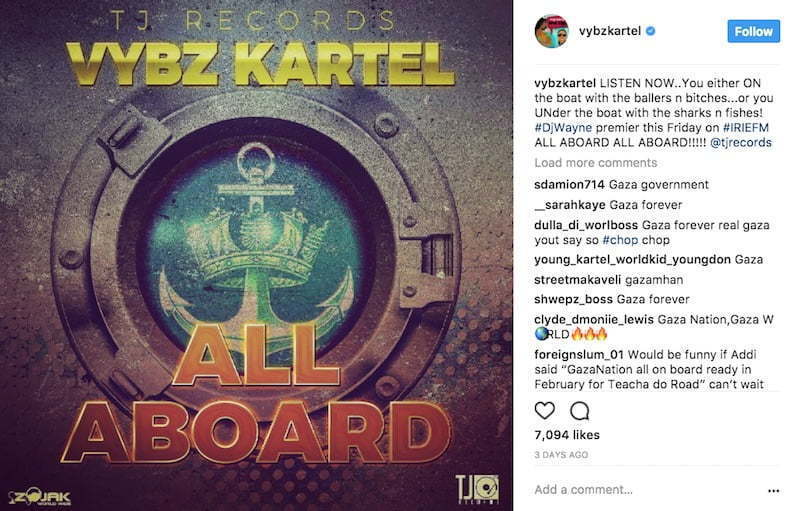 Kartel currently has two of the hottest songs in dancehall, with “Mhm Hm” and “Don’t Come Back” racking up the views on YouTube. The song “Mhm Hm” has already amassed three million views in three weeks, clocking around a million a week.