The news sent shockwaves throughout the dancehall community as the entertainer is looking at spending the rest of his life behind bars. The 11-member jury took just 2 hours in their deliberation before returning a 10:1 verdict. Presiding judge Lennox Campbell initially sent them back to deliberate further in hopes that they will reach a unanimous verdict.

But the jury returned inside the court minutes later with said 10:1 deadlock. “We will not sit by and let this case of injustice score victory,” a rep for Vybz Kartel told Urbanislandz.com. “We will be appealing the verdict given the many questionable police corruption in the case.”

Vybz Kartel, Shawn “Storm” Campbell, Kahira Jones, André St John were all found guilty, while co-accused Shane Williams was acquitted of the murder charge. Jamaican authorities stunned everyone when they swoop down on a hotel in Kingston on September 30, 2011 and arrested Vybz Kartel and several other men.

Weeks later the aced dancehall star was slapped with not one but two murder charges. He was acquitted for the murder of Barrington “Bossie” Burton in July last year. 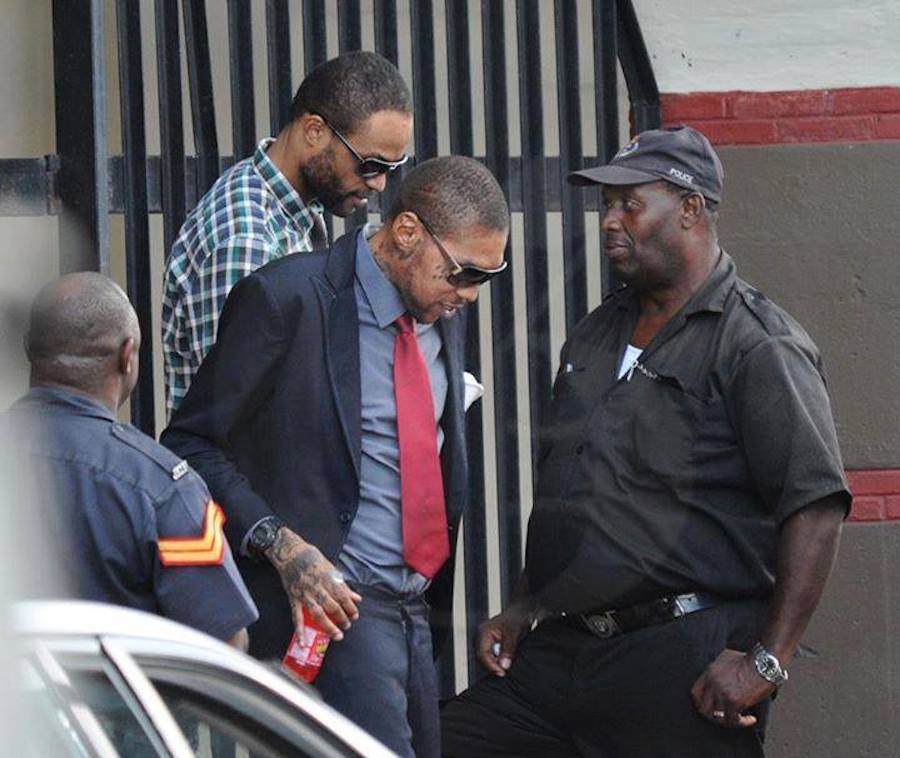 After over two years and several delays, the trial for the murder of Clive Williams got underway on November 18, 2013 in the Home Circuit court in Kingston.

The alleged murder took place on August 16, 2011 at a house on Swallowfield Road in Havendale believed to be owned by Vybz Kartel. Clive Williams body has yet to be found. To help make their case, the prosecution introduced several damning evidences including text messages, voice notes, Blackberry Messenger messages and video footage.

The Crown also had the help of an informant who says he accompanied Clive Williams to the house in Havendale on the day of his disappearance. The star witness, Llamar Chow, says he escaped from the house after seeing his friend lifeless body on the floor. He told the court that he saw one of the accused men with a building block in his hand.

The defense maintained that the entire case was fabricated by the police force with the help of the informant to secure a high profile conviction. Senior police officer Patrick Linton admitted in court that one of the Blackberry smartphones that police officers extracted data from was being used while it was in the custody of his department at the cyber crime unit.

Justice Campbell told the jury to not find the dancehall artiste guilty based on the content of his lyrics. But focus solely on the evidence presented by the prosecution. Vybz Kartel and his co-accused are facing life imprisonment for the murder.