The last two remaining members of the dancehall group Voicemail Kevin Blair and Craig Jackson wept on stage during their heartfelt tribute at Reggae Sumfest to their lost brother O’Neil.

O’Neil Edwards was robbed and killed by gunmen three months ago.

“I am still trying to come to terms with the reality that he is not here. Every now and then we will have these breakdown spells,” Jackson said in an interview.

Both artists also said that although this was not their first stage performance since the death of O’Neil, it was by far the most painful. Reggae Sumfest is the biggest Reggae Show in Jamaica and dancehall night is the most popular among locals.

Both Kevin and Blair said they became emotional when they song “Talk bout you pickney, talk bout you youth.”

“O’Neil always introduced that song, and when we were onstage it hit home that he wasn’t the one doing it,” explained Blair.

“It was extremely heavy and very hard, acknowledging that he is actually not coming back,” they further told Jamaican journalists.

The due performed for approximately 15 minutes, and they drew from an impressive compilation which included Wacky Dip, Nuh Behaviour and Praise His Name.

Wacky Dip for Voicemail was a tribute to Gerald ‘Bogle’ Levy, who also died tragically, and a song that O’Neil Edwards enjoyed performing.

Both remaining members of the group said they have no intentions of replacing Edwards. Craig Jackson spoke of the group as, “It’s still three of us, two in living colour and one in spirit”. 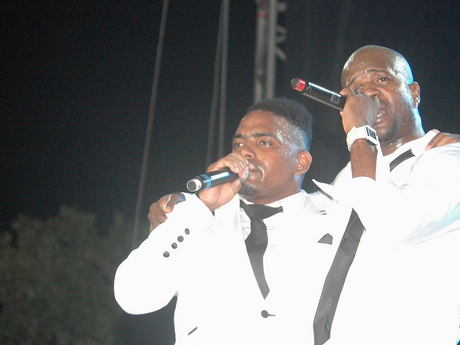