Sha’Carri Richardson might be doing some damage repair with Jamaicans or she just expressing her love for the culture.

Sha’Carri Richardson has drawn the ire of many Jamaicans in recent times, mostly because her confidence comes across as cockiness. Many have believed that she was disrespectful to the fastest women on the planet, and so she’s been branded anti-Jamaican.

It turns out she might be a fan of the island’s culture after all. As with many fans of Jamaica, she seems to have a liking for dancehall. That’s what was on display a couple of days ago when she took to Instagram to share a video.

What many noticed right away was that she was enjoying the music of two Jamaican artists Dyani and Jada Kingdom. While it was clear that she didn’t know all the words, she tried her best to vibe along to “Feelings”. Even though her followers thought the video was cute, Jamaicans were clearly not impressed, as some of the comments reflected.

“So everybody love her now cus she a play some dancehall? A so we easy fe catch?,” one fan said while another added, “Yuh see how they hate Jamaicans but love the culture?”

Another piece of evidence that might suggest that she has a bit of an infatuation with Jamaican culture is her appearance at the Met Gala last night. She showed up for the event after being dressed by Jamaica-born Theophilio designer Edvin Thompson, who is also the 2021 CFDA/Vogue Fashion Fund winner.

She showed up in a red corset-style top, a black fringe skirt, black bangles, and boots. As is in line with her personality, she had a few words to share about the look.

“I feel delicious! I feel like Cinderella. Just showing the world that no matter what you may see at the mud or the ashes, you can always rise up. The red is fire, and always ablaze,” she said.

Sha’Carri Richardson recently came under fire from Jamaicans at home and across the disapora after liking an offensive tweet about Jamaicans. 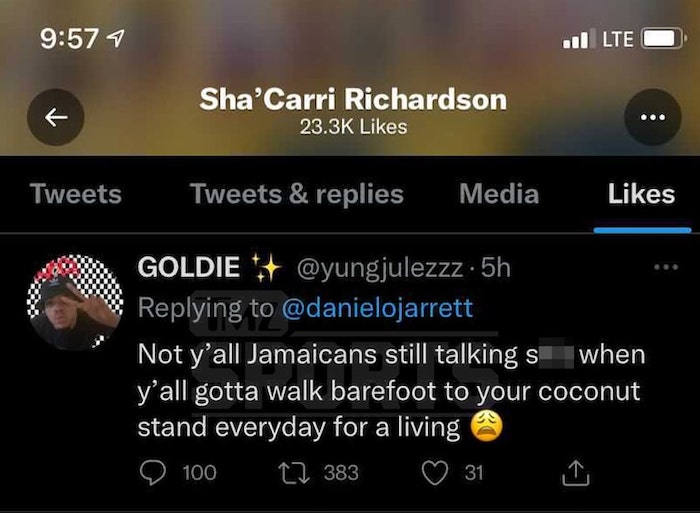