Rvssian is mourning the death of his father, Michael ‘Micron’ Johnston.

The dancehall producer/deejay shared the heartbreaking news via his Instagram on Tuesday with a touching tribute to his late father. “Daddy I love you, you were the best I could ever ask for,” Rvssian wrote while sharing a video of the elder Johnston on his hospital bed. “I will miss those phone calls from you telling me to buy candles for the hurricanes. I learned all my good traits from you & wish to be more like you.”

Michael Johnston, known inside Jamaican music circles as Micron, was a producer himself who teaches his son how to play the piano and drums from an early age. Michael is the co-founder of Micron Music Limited, a label he founded with Ronnie Burke in 1971. The name Micron originated from a slight combination of their names, Mic from Michael and Ron from Ronnie. However, over the years, Michael took on the name Micron since he was more of the face of the label.

In remembering his father, Rvssian says Michael was always decades ahead of his time.

“The simplest person I know, the most humble and most connected to earth,” the Rich Immigrant founder wrote. “You were 25 years + ahead of everything. From raising me a vegetarian to preaching about solar houses & electric cars.. i wouldn’t be who I am today without you, you influenced me musically & gave me tough love. But the right love I needed to go & get it myself without help, the right support mentally.”

“There isn’t enough tears for how I feel you are Strongest man I know – I saw you lose my brother a few years ago and that was first time I ever seen you down. but to lose you now so unexpected has killed me inside,” Rvssian continues. “I know you would want me to cherish our good moments but it’s not as easy as they say it is. Thank you for being by my mommy 50 year’s, now I will try & fill your footsteps. I will share your words to everyone for your latest release – swipe to read words from my dad.. these words will explain the type a man he was 81.”

Since sharing news of his father’s death, Rvssian has been getting an outpouring of support from his friends and fans. 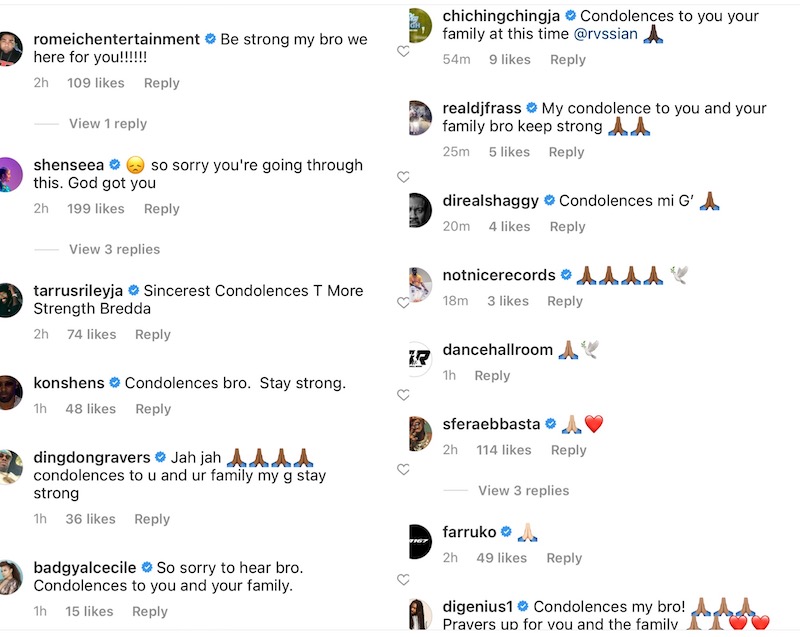 Romeich wrote, “Be strong my bro we here for you,” while Shenseea added, “so sorry you’re going through this. God got you.”

Rvssian is one of the most commercially successful producers in dancehall to date after catching his big break in the late 2000s, working with artists like Vybz Kartel, Konshens, and later becoming a co-manager of Shenseea.