Shenseea’s eggplant hairstyle has gone viral as fans relish the cheeky artwork for her upcoming single, Be Good.

Fans have been anxiously awaiting Shenseea‘s new project since the singer returned from a 7-month hiatus with “Run Run.” The track was released one month ago, and it received rave reviews. Now, the songstress is once again blessing fans with more new music.

Shenseea has never shied away from making bold, artistic moves to stand out from the crowd, just watch her music videos, and you’ll see. She knows how to get fans talking, and in her latest post on Instagram, this fact was proven. On Tuesday (August 12), she shared the artwork for the new single, “Be Good,” which is slated to be released this Friday, August 20. The cheeky eggplant-inspired image created an uproar amongst fans.

The artwork depicts Shenseea posing in front of a vibrant purple background in a blue-green colored leather dress, paired with a crescent-shaped earring, an iced-out chain, black lipstick, and bold, winged eyeshadow. But the thing that caught everybody’s attention was her hair, which appears to be in the shape of a male’s genitalia!

“The only thing that’s on my damn mind lately!!!! #BeGood dropping this Friday,” the Rebel singer captioned her post, adding a smiling face with horns, an eggplant, and a dragon emoji.

The image has created pandemonium, and everyone appears to be on the same page in terms of their expressions which are primarily, if not all, penis-related. Shenseea took a moment to share some of the hilarious reactions from fans via her IG Stories. It appears that a lot of fans quickly slid into her DMs with steamy comments about the outrageous artwork.

“Hey prinny, dwl ,yo this a whole d*ldo in yuh head #period idc what you wanna say otherwise thats a str*p on. ‘Dem big strap on deh yuh like’? Mines a 8” just putting that out there, lol am not going to like it personally but will comment to you here. Wonder if yuh can wine pon it? Or can you drop it like it’s hot? eee Seeing the progress on spotify go hard or go tha f**k home, as you take the mf throne …. as you should!” one user hilariously wrote. 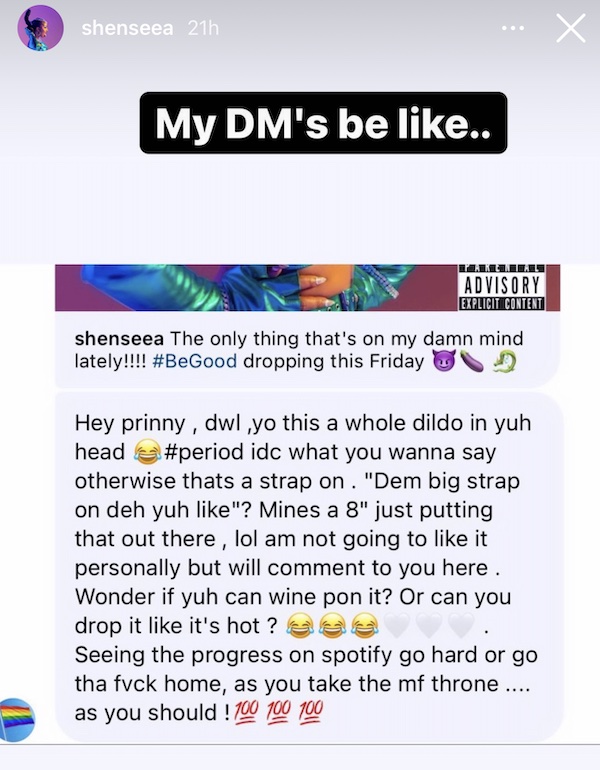 “Police a look fi u hair dresser,” another said.

Another user expressed, “UMMM @SHENSEEA YOU GOOD DO YOU NEED SOME MEDICATION?? IF SOO MY UNCLE CAN BRING IT FOR YOU IF YOU LIKE !! Shenseea you want D*CK my uncle can give you some if you like.”

Because of Run Run‘s success, fans have very high expectations for “Be Good.” The countless allusions within her post are what has fans hyped. Firstly the title, “Be Good,” can easily be translated bluntly to, “Big H**d” as fans have pointed out in the comments. Secondly, the continuous use of the eggplant emoji, which many use to signify a man’s penis. With this, the song seems to be one that will be very sexual. The title is “Be Good,” but from all indications, the content of the track will be something completely different.

Though “Run Run” was deemed controversial because of “satanic imagery,” the track still managed to acquire 1.3 Million views in 19 hours. It was number one trending on Twitter, the number one YouTube trending video in Jamaica, and it was also trending in the US and Canada.

The superstar has also recently taken over the latest edition of Spotify’s official “Dancehall Queen” playlist.

Is that what I think it is or.. pic.twitter.com/rvDsHD5lWN

I just want whatever is on Shenseea’s head pic.twitter.com/Cddmfr8WLa