Chris Brown trend on Twitter after weighing in on DaBaby’s ongoing backlash.

DaBaby continues to get bad publicity after his recent homophobic comments during his performance at Rolling Loud Music Festival last weekend. The rapper has been getting advice from a number of persons as some express disappointment in his comments.

During his performance, DaBaby reiterated several stereotypes about HIV/AIDS and even shamed gays for having sex.

Now, the rapper is getting sharp advice from former collaborator Chris Brown.

On Wednesday, Brown posted on his Instagram Story – “shut the f**k up…do yo shows thank everybody…then get the f**k off the stage!!!!!!!!” 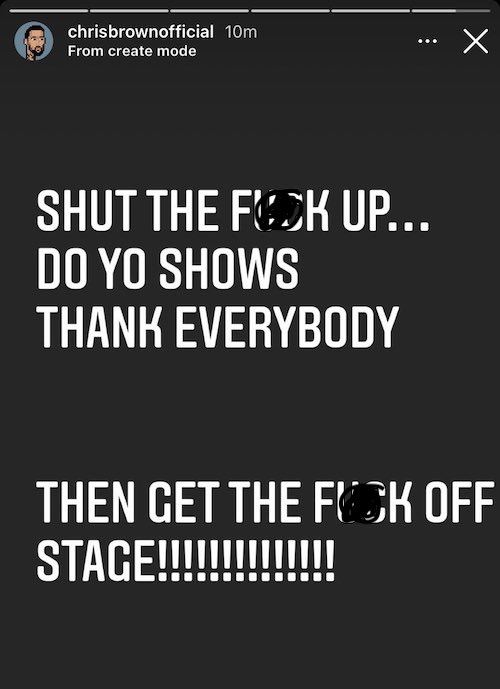 Chris Brown is no stranger to bad publicity himself working through the criticisms of the allegation that he beat Rihanna and bloodied her face almost a decade ago. The artist, however, was apologetic about his actions and kept a low profile, apologizing to Rihanna and fans who were determined to his career for putting his hands on the Bhajan Pop Princess.

However, despite what’s happening, Chris Brown, known for his sold-out shows, has never addressed any controversial issue and remains one of the most loved artists of the last two decades.

Meanwhile, DaBaby’s comments have rubbed many the wrong way, as others have spoken about his crass comments. Among those who called out the rapper are Amber Rose, Lil Nas X’s father, GLAAD, Dua Lipa, and others.

The rapper has also begun to lose financially with his clothing partnership with clothing line boohooMan canceled on Wednesday.

Meanwhile, DaBaby has offered a lukewarm apology while seeming to still justify his comments.

Do you know how horrible of a person you have to be for Chris Brown to be the voice of reason ? https://t.co/sFGErcIRuI

now pissed cause i shouldn’t be in any situation where i find myself in agreement with chris brown https://t.co/P29IYE30Yg

If Chris Brown starts dragging you and he’s RIGHT… you really gotta ask yourself where you went wrong. He barely even talk anymore ? https://t.co/pZTmiBzaAt

How you down so bad I gotta agree with Chris brown? pic.twitter.com/yFvXbe4CZi

Not DaBaby n'em being SO wrong that it gave Chris Brown, of all people, a broken clock moment. ?

not chris brown being the voice of reason pic.twitter.com/pcs5gDGOvI