Romeich Major has seemingly reacted to Shenseea hiring a new manager while alluding she might’ve used him for her own personal gain.

Fans are speculating that the latest reaction by Romeich Major could be his dealing with the news that Shenseea has split from the Romeich Entertainment camp as she hires one of Los Angeles’ finest to launch her music career in the United States music industry.

On Monday, Shenseea announced that she had a new manager- Wassim ‘Sal’ Slaiby, a position Romeich Major previously occupied from the time he signed the ShenYeng leader as his first female act since re-opening his artiste management side of his Romeich Entertainment business in 2018.

It seems that the split may not have been as amicable as thought before, or there could be a promotional ploy at play to promote the “Blessed” singer’s upcoming album release, which she said was finished last month.

On Tuesday, Romeich had fans going over a status many felt was shade towards Shenseea.

“Some people will only “love you” as much as they can use you. Their loyalty ends where the benefits stop,” he posted on his official Instagram account to his almost a million followers. 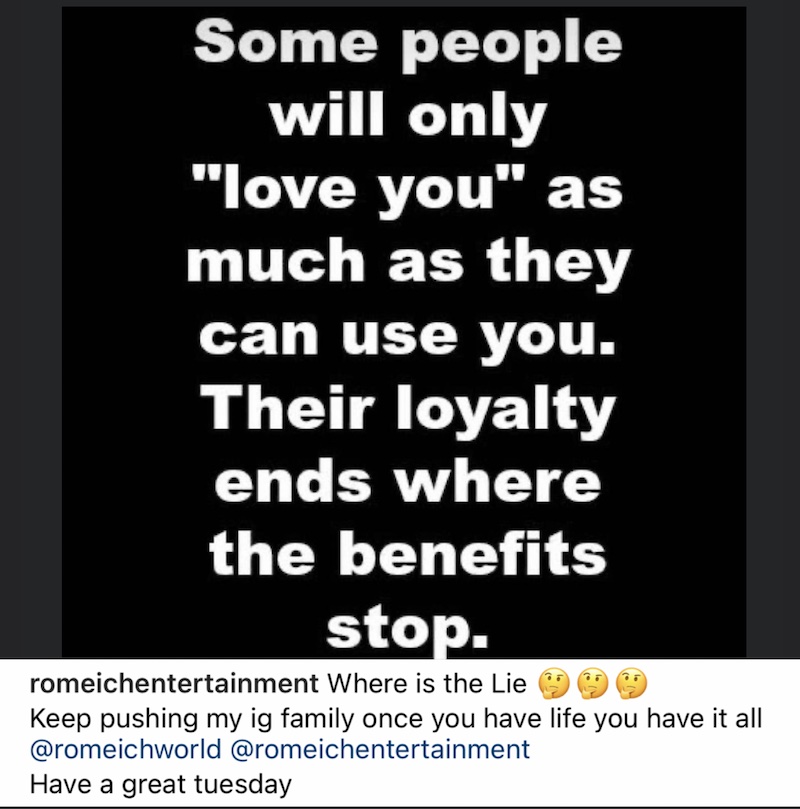 Some were quick to react, but not everyone believed that Shenseea and Romeich are actually beefing given how close they’ve been since he signed her to his team.

“Don’t believe there is any rift just a ploy to keep people and interested,” one person commented. “Romeich just a trick the crowd and a tell unuh what unuh want to hear,” another said.

Others, however, were rooting for the pair to not be at war with each other. “I hope this is not towards Shenseea I saw she have [sic] a new manager now. I love you both I just hope things don’t change between you two,” another person commented.

Meanwhile, all photos of Shenseea have been removed from Major’s Instagram timeline. However, those of her son with Romeich remain as he referred to Rajeiro Lee as one of his three children.

Neither Shenseea nor Romeich has addressed the rumors that she has split from his camp. The artiste is presently in the United States, recording and promoting her debut album as she joins an elite team of artists managed by Slaiby.