Azealia Banks is not giving up until she gets her guy. It looks like she’s intent on sending Kanye West the message that he should be with her. Fans already know that she is a magnet for controversy, and her outlandish style has helped her to rise in the rap genre.

Azealia Banks also seemingly changed her ways after many wrote her off due to some excessively negative comments that she’s made in the past about several other female artists, including Doja Cat, Megan Thee Stallion, and Lizzo, among others.

In what has been a surprising turn of events when it comes to her love life, the female rapper has become infatuated with Kanye West since he announced that he and Kim Kardashian would be filing for divorce. It’s surprising because in the past, she’s spewed a lot of hatred towards the eccentric rapper and fashion mogul.

We don’t know when that changed, but earlier this week, she had fans in a tizzy as she teased her new single by showing some cover art that featured the billionaire’s name spelled out letter by letter on her fingernails.

The track, which is called “F*ck Him All Night,” leaves little to the imagination about its content. She’s now confirmed that it’s not just about any man either; it’s specifically about Kanye. 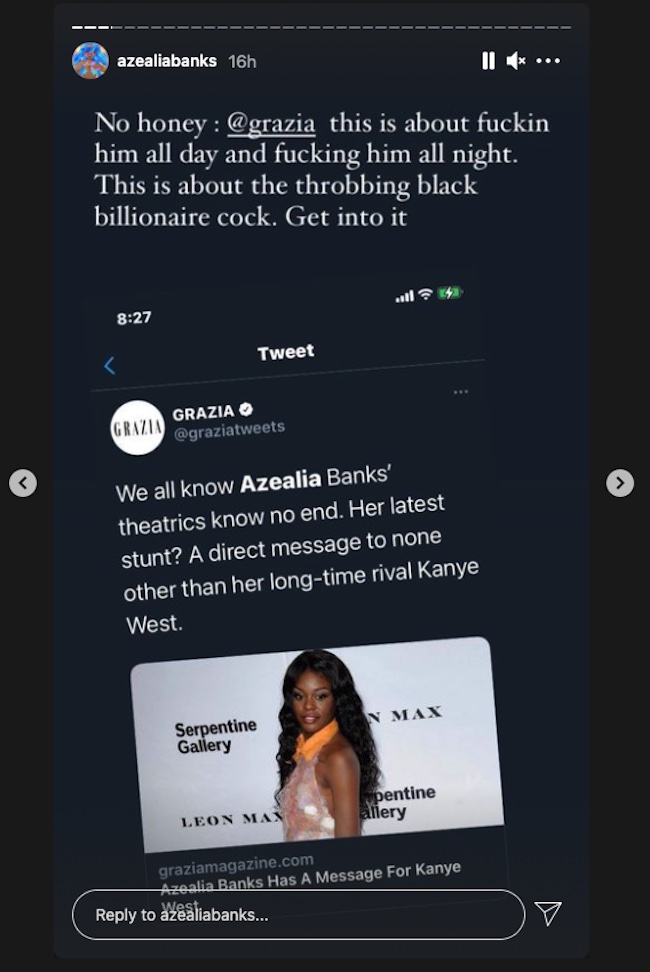 In her typically raunchy style, she posted the following snapshot on her Instagram story: “This is about f*ckin him all day and f**king him all night. She added: “This is about the throbbing black billionaire cock. Get into it.”

The jury is still out on whether she’s just using his name to get some buzz off of the new single or if she really intends to bag him. With Azealia, we may never truly know.