Has modern-day dancehall shown strides in the natural progression of the genre, or has it been a setback for those pursuant?

Shaggy and Chronixx have expressed different views about the state of dancehall and its scope for growth. The ongoing conversation about whether the evolvement of the genre has been for its betterment or detriment continues to garner mixed reactions. Perhaps these two artists are sharing varying outlooks based on the perspectives of their argument. While Shaggy’s recent sentiments have seemingly tackled dancehall’s overall potential on an international stage, Chronixx has shed some light on what actually appeals to young audiences.

During their press run to promote their hit song “Go Down Deh,” Shaggy and Spice recently appeared on The Breakfast Club for an interview. During their chat with Charlamagne Da God, DJ Envy, and Angela Yee, the duo discussed the evolution of dancehall and how its influence on other cultures has caused other genres to be much more successful.

According to Shaggy, these new artists have taken the “dance” out of dancehall by turning the music into a trap and dancehall fusion. He says the instrumentals that defined dancehall music in the 90s have become almost obsolete among young dancehall musicians. Meanwhile, other genres like reggaeton and afrobeat still use those original dancehall beats as a foundation for their growing catalog. 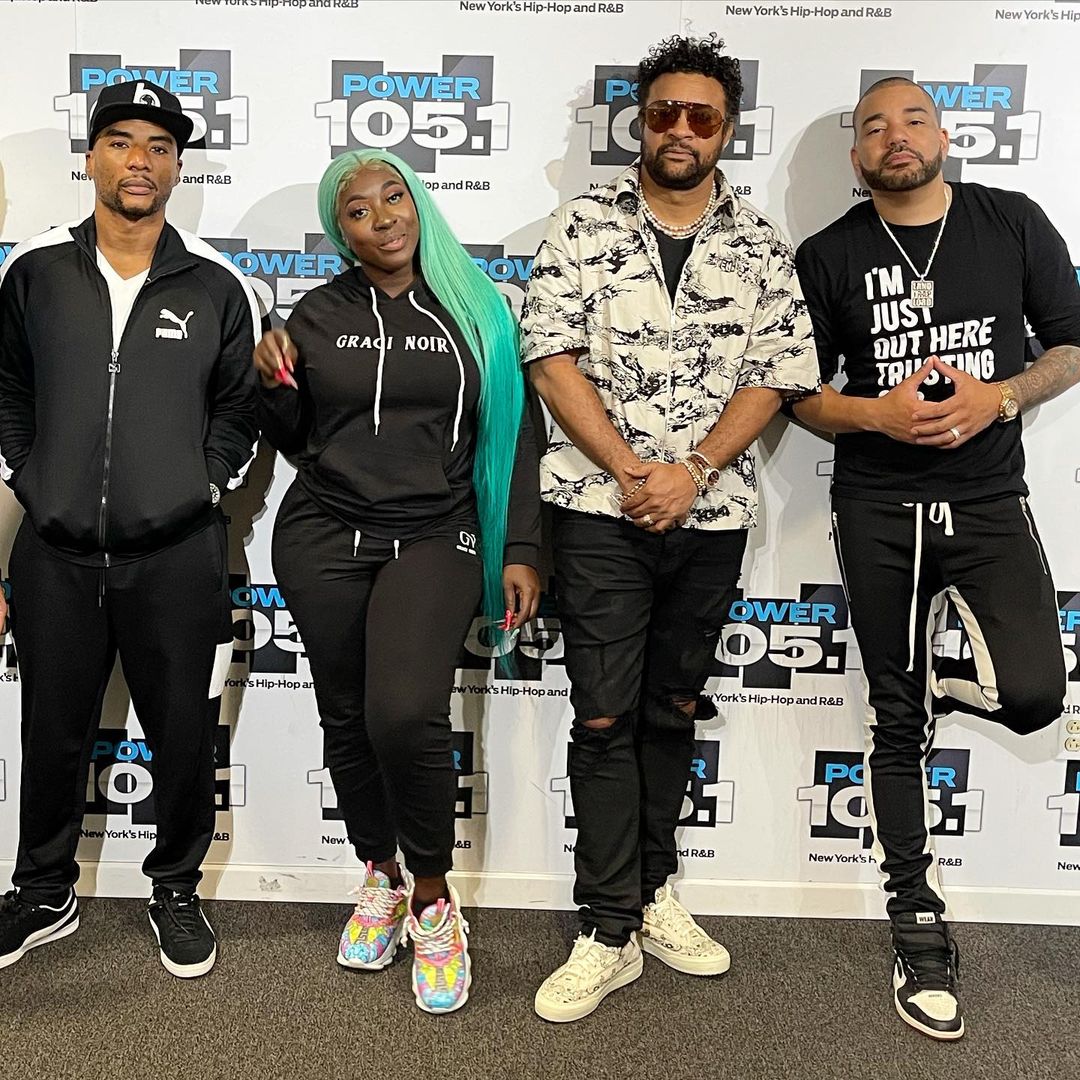 “The beat of dancehall, if you ask a DJ that’s on a global scale, what kind of dancehall would move a party, they’ll tell you 90s dancehall. The difference between current dancehall and 90s dancehall is the beat. So we’ve tried to fix something that wasn’t broken,” Shaggy said on the Breakfast Club.

“So reggaeton which comes from dancehall, is a billion dollar industry/genre, they’re still on that dancehall beat. The beat itself, the Reggaeton beat is called Dem Bow, that comes from Shabba Ranks‘ ‘Dem Bow’ and they’re still on that and it’s a billion dollar genre. Afrobeat is a spin off in Africa…most of what was played in Africa – their main music was dancehall so afrobeat was inspired by dancehall, hip hop, whatever it is,” he added.

The addition of the trap style to Jamaican music has stripped away its original elements, and Shaggy believes that the streaming numbers across other genres reflect that it’s not necessarily the right direction for dancehall. “If you look at the streaming numbers, the 90s dancehall is still streaming better than the new dancehall,” Shaggy said. “I’m not knocking the new generation, I collaborate with these guys and I like a lot of them, and I think they are the future but I need to let them understand the market place.”

Interestingly enough, Chronixx, who is considered one of the leaders of the young generation in reggae music, strongly disagrees with Shaggy about what the people really want. In an Instagram Stories post critiquing the views expressed during the interview, the “Likes” crooner says young people nowadays love current dancehall music more than 90s dancehall music, which is indicative of the new generation of artists doing something right.

“Do young people love 90s dancehall more dan teacher an vaado and gong and dem man deh?” Chronixx questioned. He also mentioned how even 90s dancehall itself was a lesser version of what the genre used to be, suggesting that the music has been evolving steadily in the same direction for years and has still been attracting fans.

“90s dancehall was a massive water down to the original Jamaican dancehall sound from the late 70s-80s,” the reggae star wrote. 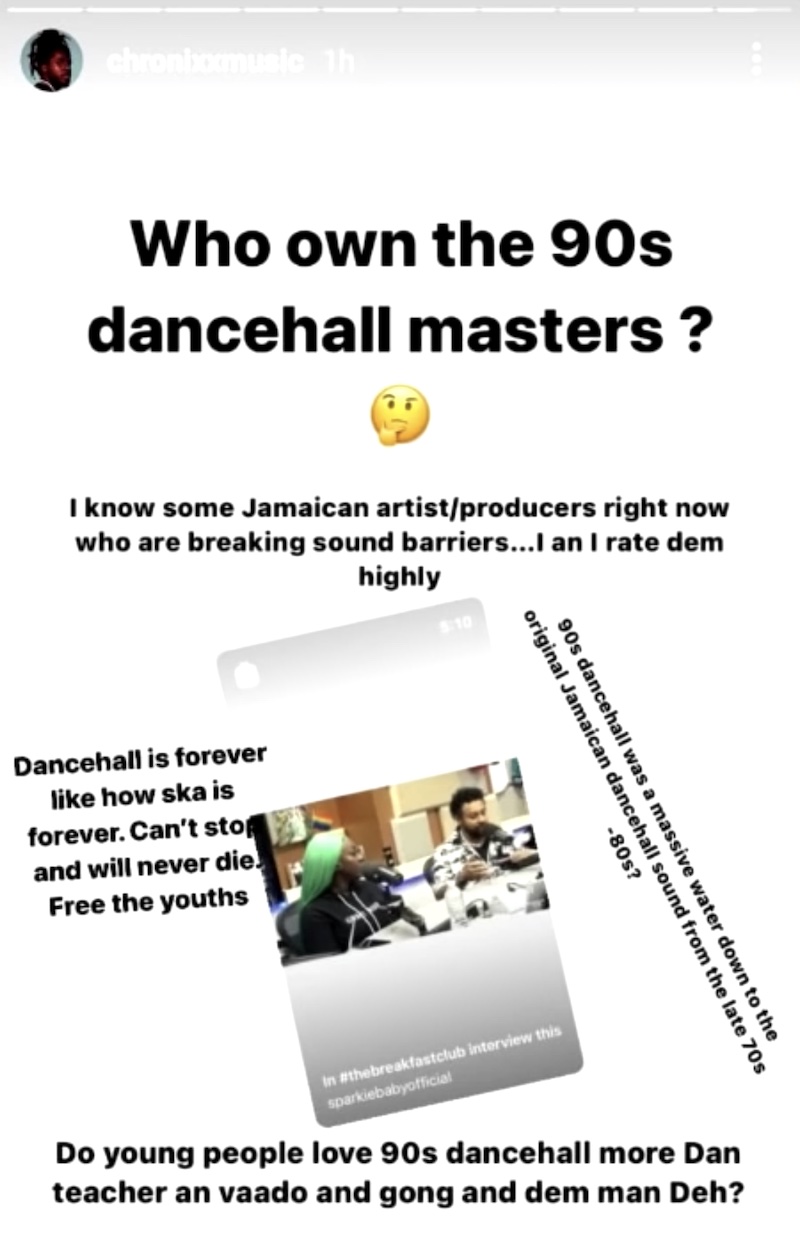 Some critics’ analysis have determined that both views could be exclusive rather than opposing. Chronixx mentioned that young listeners are bigger fans of artists like Vybz Kartel and Mavado rather than 90s dancehall artists, but it is also true that more profound streaming numbers are seen among artists and genres that still use the 90s formula. Is this to say that the trap dancehall evolution has less international market appeal than the previous sound?

Most local Jamaican fans enjoy new reggae and dancehall more than they would their parents’ generation of the music. However, a different analysis is derived from the statistics when it comes to streaming and sales. Shaggy suggested that various scales can be considered when evaluating the direction of dancehall music and its correlation with its performance on the world stage.

“What seems to happen sometimes is that [artists] live in a bubble and for instance, we all can get into that bubble,” Shaggy explained. “So you’ll make a certain amount of money out of dancehall, doing a local club and collect a 25k here and you’ll buy some cars and what not, and I might be on another level because I sold diamond… but then I went with Sting and see that there’s another level.”

The “Boombastic” hitmaker says no one is immune to that bubble, as he learned when he collaborated with Sting. “I’m like ‘woah woah, music makes this kind of money? People do make this?’ and that opened my eyes. I learnt this late in my career, I’m like if only I had known this earlier,” he continued.

“So I want these guys from my genre to understand how rich the culture is and how much you can make from it,” Shaggy added.

We can’t deny that there are certainly levels to this music game, and that goes for any genre. Many industry players like popular deejays ZJ Rush and ZJ Chrome and even dancehall veteran Beenie Man have agreed with Shaggy’s take on the situation. However, artists like Chronixx want to ensure that the work that is being put in by young dancehall artists and producers is not being dismissed. “I know some Jamaican artist/producers right now who are breaking sound barriers… I an I rate dem highly,” said Chronixx.

Young reggae and dancehall artists and producers have definitely been instrumental in forging a new sound that is not only industry standard and appealing but has maintained the genre’s influence and buzz. Some of the biggest international artists still draw inspiration from lesser-known Jamaican creatives who have captured their attention with outstanding beats, brilliant songwriting, and amazing sounds. It is, however, observed that one can argue that these local musicians get little to no recognition even when they play such an integral role in the success of massive international hits.

A great example that brings both Shaggy’s and Chronixx’s ideas together in one neat package is the Grammy Kid herself, Koffee. While she is among the young generation of reggae artists who have been carrying on the torch, the music that helped her to cop the record-making coveted award was rooted in original reggae beats that can be likened to some of the most popular ones from the 90s. Her song “Ragamuffin,” for example, was produced on the “Real Rock” riddim, which utilizes authentic reggae sounds and instruments similar to what was used more than three decades ago.

Other artists like Lila Ike and Sevana, who are both signed to Six Course/RCA Records under Protoje‘s In.Digg.Nation’s label, could be candidates for some of the biggest chart achievements and bring global recognition to the new wave of reggae and dancehall with their industry standard sounds alone. However, their streaming numbers and sales fail to be as impressive as the old hits that are still being rotated on the international market.

What does this mean about what reggae and dancehall music has become and what it has left behind? Should Jamaican artists and producers consider incorporating more 90s dancehall styles with their contemporary music and boycott the modern trap sounds, or should they continue on this path of evolution until the well-deserved global recognition they seek is visited upon them?