Romeich Major is mourning the loss of his older brother.

More than anything these days, ill-health and death seems not just inevitable but abrupt. Unfortunately, many people have been suffering major losses in their families and among their friends. In the entertainment world, we have said goodbye to a long list of local and international stars as well and some are grieving the passing of their loved ones also. Head of Romeich Entertainment, Romeich Major recently took to social media to pay tribute to his brother, Steve Major who unfortunately passed away.

The artiste manager, who manages Shenseea, Ding Dong, and Teejay, revealed that Steve was one of his eight siblings. He says his big brother who was living in New York at the time of his death was one of the closest ones to him. While Romeich did not mention a cause of death in his posts, he mentioned how we should all treasure life while we have it. “Life is a rear Gem have to protect it and treat it good for it to last as Long as possible,” he wrote on Instagram Stories. “(R.I.P) to my big brother STEVE MAJOR you will be missed bro real general.”

Romeich also posted a reel of photos on Instagram along with a heartfelt caption lamenting his older brother’s passing and the impact he had on his life. “It’s never easy [losing] a love one,” he began. “No matter how strong you feel you are when they are gone all emotions in your body start to over work.” 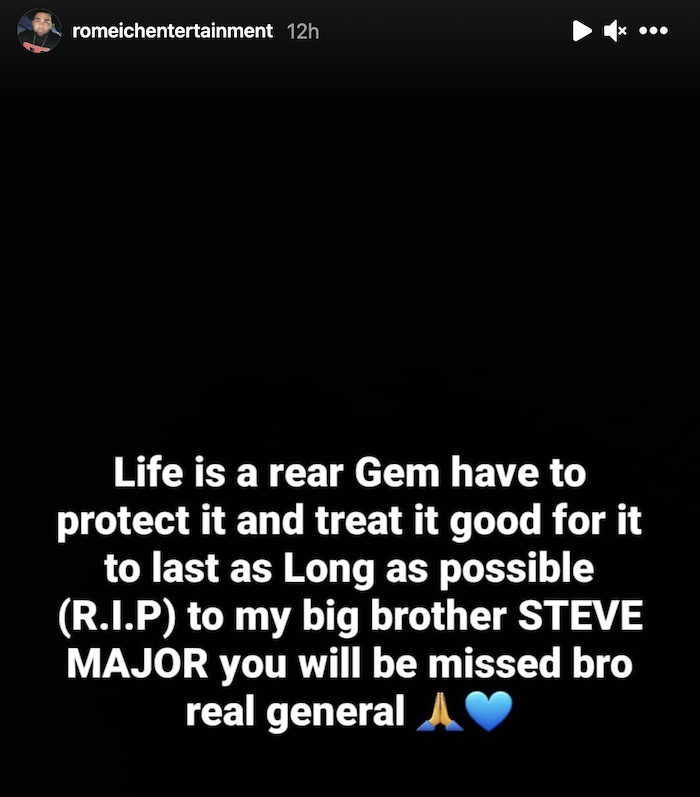 The Romeich Entertainment boss went on to say his big brother taught him a lot about life and family and always took great care of him when he visited New York. “R.I.P my big brother you will forever be missed by all #SteveMajor,” he added. In the comments, Romeich received condolences from friends like Shaggy, Shenseea, Teejay, Ding Dong, and more. Former Miss World and Jamaica MP Lisa Hanna also wrote, “So sorry for your loss. Stay strong my brother and take the time to grieve in your own way.”

Our condolences to Romeich Major and his family.