Meek Mill trends on Twitter for apparently not knowing what a ‘pH balance’ is.

Whenever you see Meek Mill trending on Twitter, you know it’s for something he said that isn’t sitting well with fans. Often time it’s for something involving women. Yesterday, Justin Laboy made a post on social media saying, “Watch your PH balance not my page,” to which Meek Mill responded, “What is a PH balance….. sounds like a excuse lol.”

For the non-science majors, pH is the measurement of how acidic or alkaline a substance is like, for example, your drink or your dish soap, etc. The measurement is between 0 and 14, with 7 being neutral. Below 7 is how acidic a solution is, and the further you go above 7 is the more Alkaline you get. The human body’s pH level is usually tightly regulated by our body at around 7.4, slightly Alkaline.

Nevertheless, when it comes to Justin Laboy, he’s likely talking about something vagina-related, which has a pH balance of between 3.8 and 4.5, moderately acidic. Perhaps you can’t fault Meek Mill for not knowing this since he’s a rapper, not a doctor. Still, social media users dragged him for it. 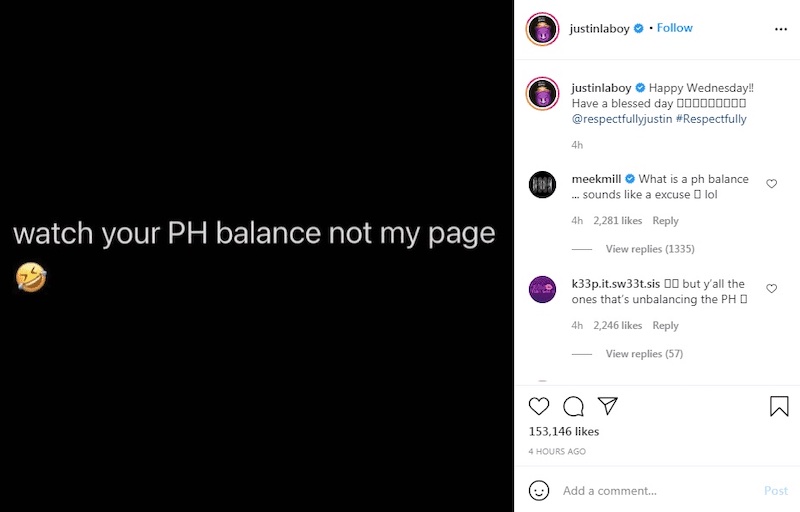 While some Twitter users thought the “Champions” rapper must be joking, the majority went on to attack the rapper, who is known for particularly making oblivious and ignorant comments. The rapper has been dragged a number of times for these comments.

One Twitter user posted a distressed meme captioned, “Meek Mill strikes again.” Another user said, “meek mill on IG talking bout what’s a ph balance? Call me John cause I’ve cena enough!” Another defended, “Rent is due in 2 weeks, u are a couple hundred short and u worried that meek mill don’t know what a PH balance is.”

“Meek mill pretends to be this socially conscious human when he rlly got the IQ of a damn rock. Just release ur music and shut up,” someone else said.

While Meek Mill has had his fair share of success over the years, the “Dreams and Nightmares” rapper stayed in the spotlight not only because of his achievements but also as an activist, working towards the greater good.

Following his release from state custody in 2018, Meek Mill began advocating for criminal justice reform in the United States and worked with Jay-Z in forming the REFORM alliance.

meek mill pretends to be this socially conscious human when he rlly got the IQ of a damn rock. just release ur music and shut up pic.twitter.com/AHhUMdXCkW

meek mill was an experiment created by the US government to emasculate black men in america pic.twitter.com/idlK5qFwjr

Black twitter coming onto the timeline any time meek mill does anything pic.twitter.com/L3mhVfrmBI

Every time Meek Mill speaks I understand the reactions in this picture more and more ????? #MeekMill pic.twitter.com/y7yMOpgflz