Shenseea recently hoped on IG for a Q&A where she opened up about not knowing her father, being withdrawn since her mother’s death, and her love for her son.

The 24-year-old “Bad Alone” deejay has never been one to hide much from her fans. However, the recent session seemingly provides fans with even more knowledge of who is Shenseea. The singer has seemingly not been as interactive on social media as she previously was. This fact was pointed out by a fan who asked her reason for this sudden change. To that, she responded,

“Its crazy that you notice, I’d hoped it wouldn’t be that much of a big deal. My mom’s death really changed me. Less talkative, more reserved. I hope it won’t be like this forever but at the moment I can’t help it. Time is master and I assure you it has changed my love for y’all; it has grown seeing the support and comfort you give in my hardest of times.”

Last year, the dancehall singjay lost her mother unexpectedly. Many fans and artists sent their support on social media.

One fan took to the Q and A session to commend the dancehall diva for her strength. “Not a question…but I really admire how strong you are,” the fan said, to which Shenseea responded, “Too strong, maybe. Sh*t got me emotionless atp.”

The artiste was always one to post and talk about her mother on Instagram, especially before her death, but never really addressed questions surrounding her fathers’ presence. From the Instagram session, Shenseea revealed that she has never met her father but heard that he left the country for work while her mother was six months pregnant. 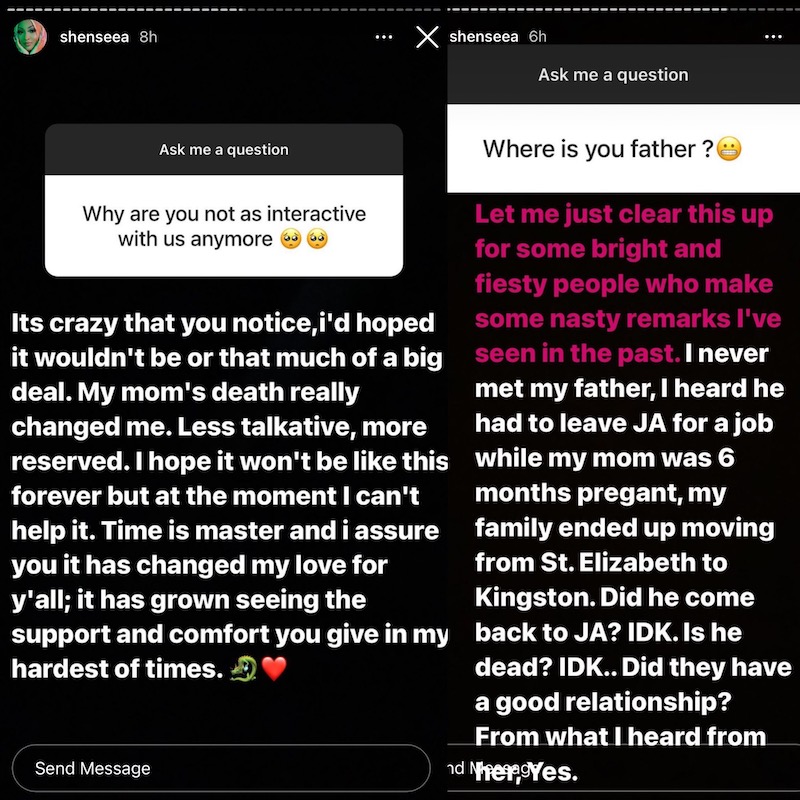 “My family ended up moving from St. Elizabeth to Kingston. Did he come back to JA? IDK. Is he dead? IDK.. Did they have a good relationship? From what I heard from her, Yes.” The artiste posted.

On another note, when asked what has been her biggest accomplishment thus far, the artiste responded saying, “The fact that I’m still going strong though people said I would be a 1 hit wonder! You know how amazing that feels? Ha!”

Shenseea is now considered one of dancehall’s fastest-growing artists locally and internationally. The artiste rose to fame in 2016 with her song “Jiggle Jiggle” and took off when she did a remix to Vybz Kartel’s “Loodi.” 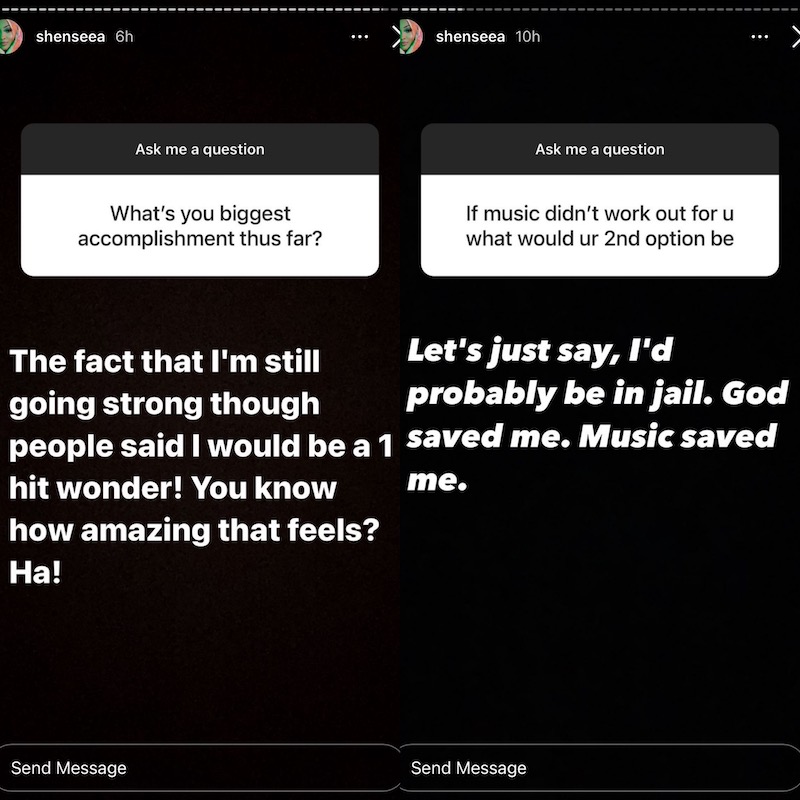 She has welcomed the fame and success but says she stays authentic in all the hype by living for herself.

The young artiste also received questions about her son, who is publicly adored, and of course about her love life.

“How did you find out you were pregnant with Raj and wat was ur reaction?”

“The love for my son is unmatched and unexplainable. I been loved that kid even when I was broke,” Shenseea said while explaining that while she was only 19, she was happy about her pregnancy. She also encouraged young girls not to be like her in that situation.

“Is it hard being a mother and doing music at the same time?” Another fan asked.

“Naah,” she said. “The only sacrifice I have to make is not being by him while touring. Otherwise, I love my son and I love my career. So I just do what needs to be done ALL THE TIME and MAKE THE TIME for both!” 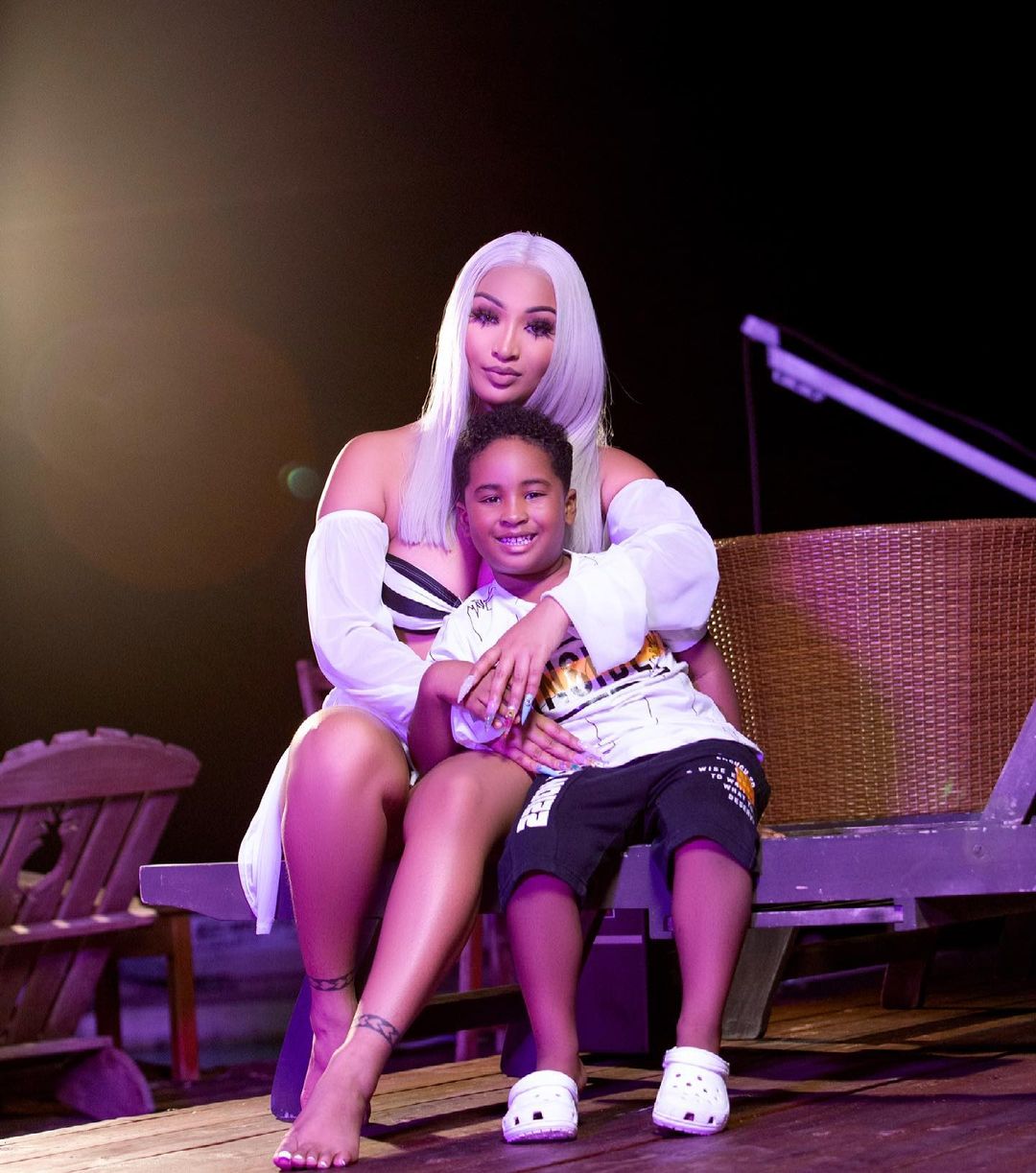 Shenseea gave birth to her son Rajeiro Lee before her music career took off. While he is loved by many fans and members of the public, fans were more excited to learn about the artiste’s love life.

One person asked, “Do u hav a man right now?” To which Shenseea answers, “No.”

Another asked: “Have you ever been in love?” To which Shenseea again answers, “No.” And another, “Do you have a celebrity crush?” She responds again, “No, which I find very sad.”

Soon after, fans were, of course, asking for new music, to which the dancehall artiste promised that she will be releasing a lot of new music soon.

While Shenseea has been working hard in the studio, her last song, “Upset,” was released three months ago, which is a long time in between songs for active dancehall artists. Perhaps her debut album is on the way.