Bounty Killer laud Usain Bolt’s new charity initiative but had to check a fan for criticizing children’s hair who posed for a candid photo with the sprint legend.

Urban Islandz reported that Usain Bolt Foundation donated 150 laptops to schools in rural Jamaica. The devices have a reported value of US$40,000 or approximately a little over JM$5.8 million. The retired sprinter has been handing out donations across the island since 2010, when his foundation was founded.

He said of his latest donation, “The best thing about my life is being able to give back, especially to the children. The current global pandemic has forced many children to do only online classes and highlights the need for technology in schools. We will keep working to provide much-needed equipment and support the education of the next generation.”

As is customary when a good deed is done, well wishes gave him the usual pat on the back to show their support of the kindness bestowed. It was, therefore, no surprise when Bounty Killer posted a picture of Usain Bolt with some kids with the caption, “The champ championing the cause. Aspire to inspire such a desire @usainbolt Giving Back.” He was, of course, acknowledging him for his assistance to these students. The deejays fans sounded off in the comment section below the post. This is where things went a bit awry and resulted in a follower being called out by the “Grung Gad.”

One follower decided to comment on the state of some of the children’s hairs when they posted: “They couldn’t brush the likkle yutes dem head before they take the picture C’mon mann!!” Bounty Killer has never been one to mince words, and as such, he responded pronto. “U paying attention to that or the cause of the moment? only Jamaica ppl smh!” 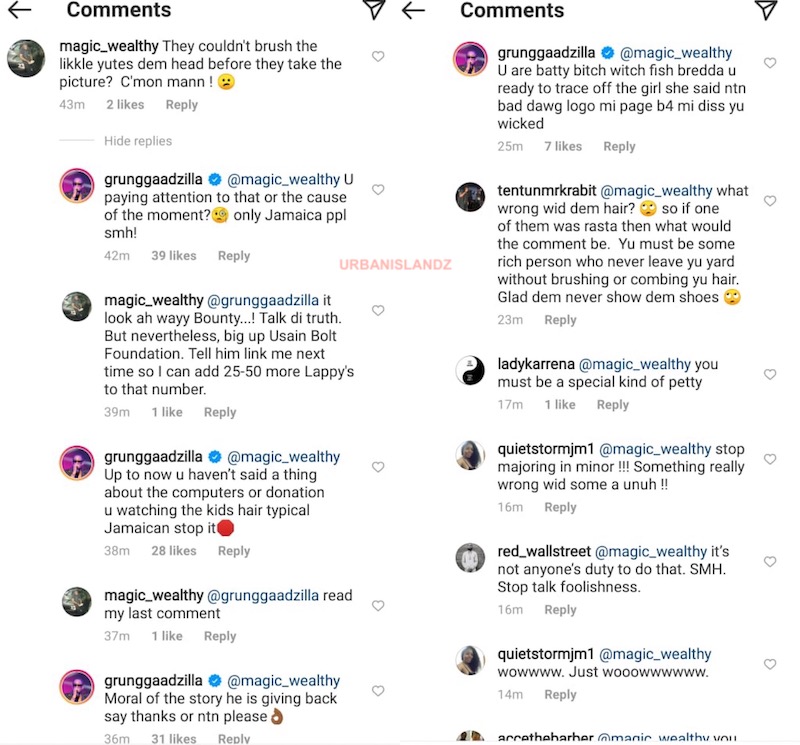 Bounty even went further, questioning the follower why he cannot comment on the donation instead of focusing on the children’s hairstyle. He ended his rant by reminding the person to focus on the “moral of the story” as he is giving back, and he should either say thanks or say nothing at all. Bounty Killer fans also lashed out against the negatively the IG user had spewed in the comments. Thankfully, the discourse was quickly quashed shortly after.

The person who wrote the initial negative comment eventually acknowledged that the foundation should be commended for its initiative.