Joe Budden wasted no time taking a dig at Twitter after losing his verification badge.

The retired rapper turn podcaster’s blue tick disappeared suddenly, but he isn’t taking it personal as he reacted with confidence that he was not made by or on Twitter, so the affirmation by the platform does not bother him. Joe Budden has 1 million followers on Twitter and is an active contributor on Twitter since 2009. However, fans realized on Friday morning that his blue tick was taken away. “What happened to the blue check,” one fan asked him.

Budden replied, “doesn’t matter lol…I was verified long before Twitter,” in reference to his long history in rap and music that has made him almost a household name for rap and hip hop listening fans.

While Twitter has not offered an explanation, fans mused that the verified tick might have been removed when he tried to turn his account into a private account. Several persons claiming to be the media personality have created fake profiles in hopes of being verified as the Budden. 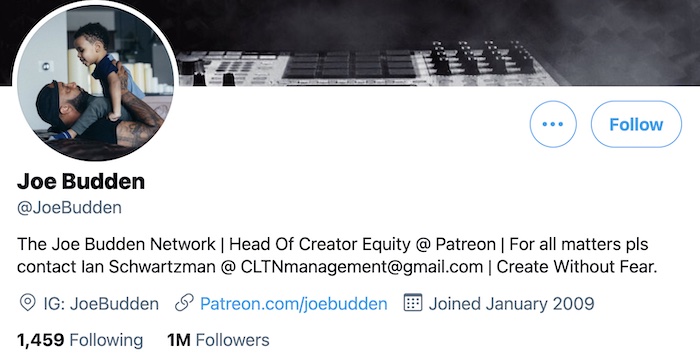 Meanwhile, it seems that Joe isn’t bothered because he recently signed a deal to move his podcast to Patreon, which offers a bigger audience and allowing him more freedom to interact and meet his followers as he delivers his sometimes controversial topics that have certainly left fans gripping their pearls at times.

One of those controversies happens to be an admittance that he masturbates his dogs to assist them. He was dragged on the internet, and it seems that Joe Budden is now also being mistaken by Twitter users for Joe Biden as many confuse the two and accuse the U.S President of being a pervert.

Joe Budden was trending on Friday as many seem to confuse him and the new United States President Joe Biden, with many lashing out at the former.

“Joe Budden been in office a little but too long for me to not have this check,” one person tweeted.

“The amount of people thinking this is about Joe Biden…” another said.

Doesn’t matter lol… i was verified long before Twitter. https://t.co/9no79z7a99