It seems that trouble is in the camp for Safaree Samuels and Erica Mena as the rapper/reality star has publicly aired his regrets about getting married.

Both Safaree and Erica Mena took to Twitter on Tuesday as he aired what seems like a disclosure that his marriage is in trouble. In now-deleted tweets, he said, “I mean this from the bottom of my heart getting married was 1 of my BIGGEST mistakes.” The rapper also said he’ll never remarry and would leave a relationship before he does something that might send him away to jail. “…and it will never happen again. I’m walking away before I end up in jail over some dumb s**t. Nobody is worth my freedom,” he said.

Safaree and Erica Mena got married in 2019 after a relatively short dating period as he pursued her on VH1’s Love and Hip Hop. The two have a one-year-old baby daughter. In spite of the public appearances, it seems that Safaree isn’t happy as the two have aired each other out in public before with speculations that their relationship is on the rocks. In November, rumors swirled that the two are done after Safaree posted an image of himself in which he refers to himself as a bachelor and saying “ending 2020 right.” The two had also unfollowed each other and shared cryptic jabs at each other without officially confirming that they were heading to splitsville. 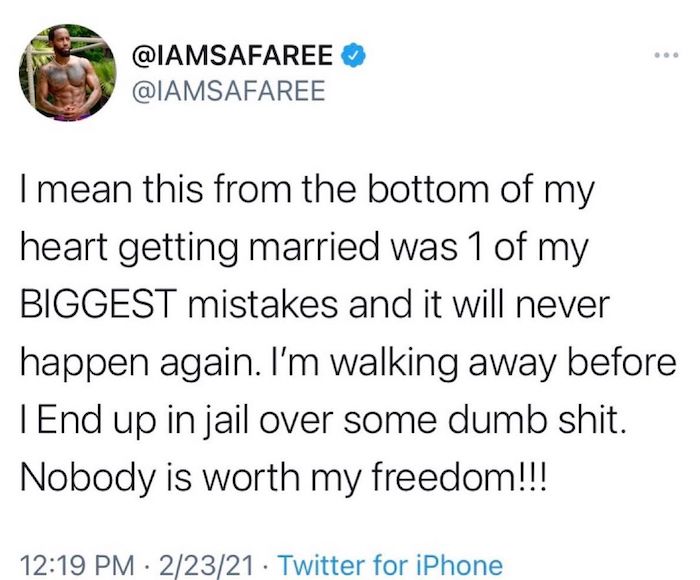 Meanwhile, Erica Mena is not dancing around the drama as she directly addressed Safaree’s tweet on Tuesday with a quote tweet in response to him. Her tweet reads, “Since you always run to social media like a little girl I might as well join in. I absolutely agree with you on this You are the most selfish, vain and inconsiderate person. And not just with me but your only daughter.”

Meanwhile, relationship expert Derrick Jaxn had some words for the couple who appeared happy over the past weekend. He said, “when you have marital issues, don’t run to social media. Run to God. Run to his word. Contact Godly counsel. Find some resources that align with God’s will. You’re not doing anything but inviting the enemy in when you go telling social media…”

Fans, however, weighed in as can be expected when you disclose your business online. Some called out the pair for making up drama for a Love and Hip Hop storyline, while others seem to agree that Safaree is indeed vain. One person commented, “after what he said about Erica getting big while pregnant smh….he is shallow af!” in reference to Erica’s disclosure that she wanted more children, but Safaree was not having it because he didn’t like how pregnancy damaged her body. He prefers a surrogate mother if they are to have more children. 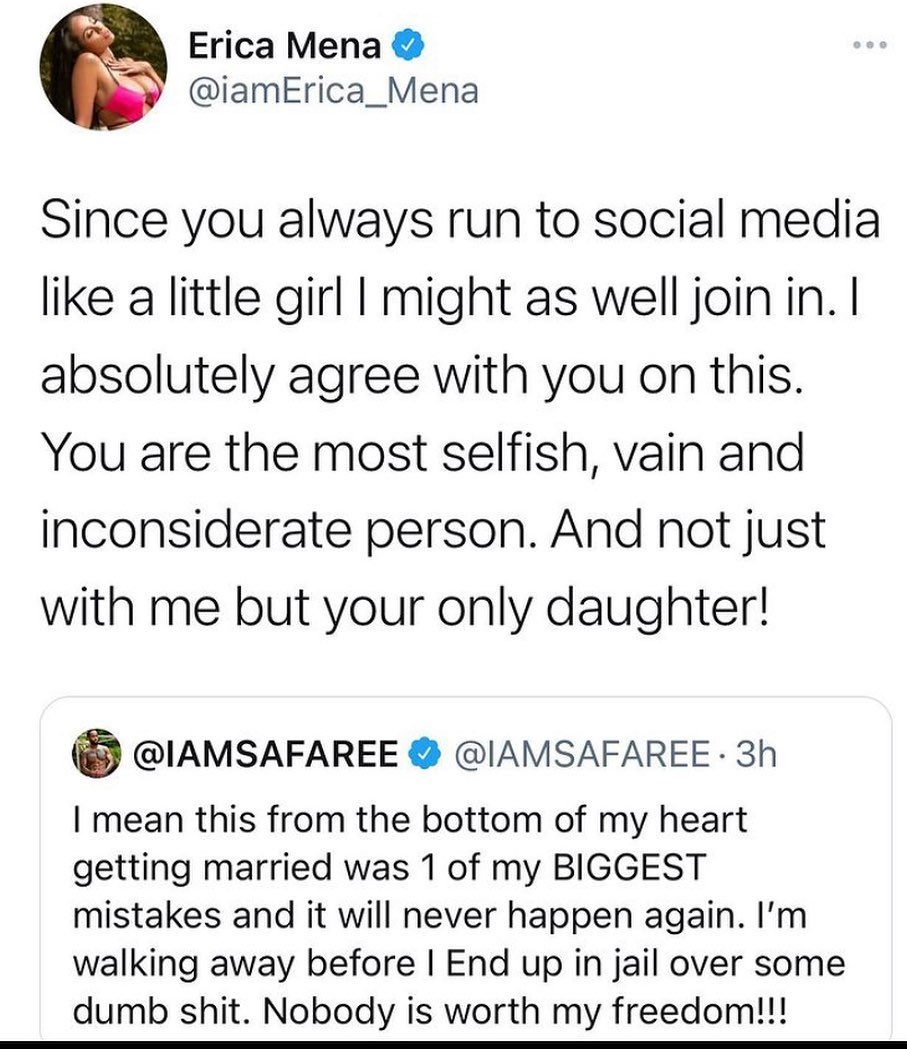 Another person said, “that’s what she gets for marrying a clout chasing clown.”

The pair who has appeared otherwise happy on social media also shares an OnlyFans account. A check also revealed that they unfollowed each other on Instagram, and Safaree has removed all photos he had of Erica on his account. On her account, she too has removed all references to Safaree.