Modern dancehall and hip hop might’ve not been the same without U-Roy’s contribution.

The reggae/dancehall community is mourning the death of another pioneer in the genre. The veteran artiste, who is largely credited as one of the founders of modern dancehall, died in Jamaica at 78-years-old. Urban Islandz reported that he had been ailing for some time and had suffered an heart attack. The legendary Jamaican musician died at the University Hospital of the West Indies last night, February 17.

In 2019, U-Roy was crowned the undisputed King of Dancehall and all deejays. The ceremony for that coronation happened during the 10th anniversary of Reeewind, a vintage Reggae/Dancehall stage show in New York. Another giant in the dancehall genre, Shabba Ranks, had the honor of presenting U-Roy with his crown.

If ever there was an artiste who led a fulfilling life with an inspirational musical legacy, U-Roy, real name Ewart Beckford, is one of them. Daddy U-Roy earned the title of King of Dancehall because it was his voice that helped to pioneer the art of toasting into an accepted form of music in the 1970s when the Jamaican sound system era was taking shape. For those of you unfamiliar with toasting, it is the way of talking or chanting a melody over a rhythm or beat by a reggae deejay. While many dancehall deejays now practice the art of toasting, U-Roy was the first to cast an enchanting melodic spell on a beat. That infectious sound would go on to shape an entire genre of music, dancehall, born out of what we popularly call reggae. 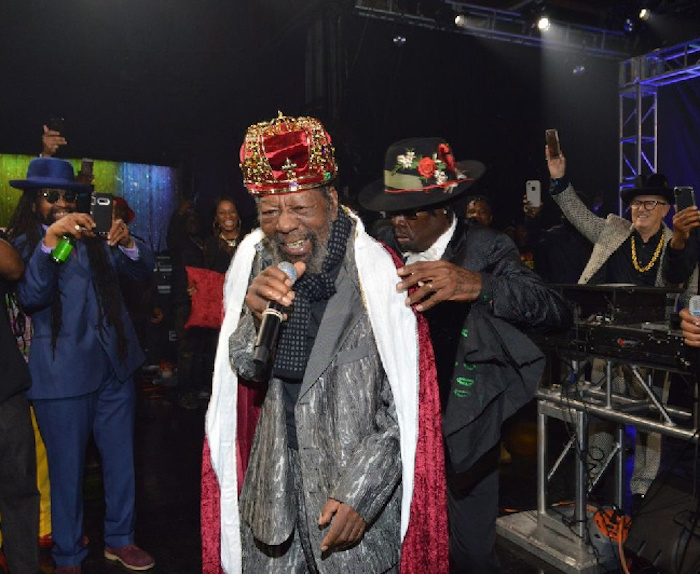 U-Roy began his career in music at just 20-years-old and many of his peers at the time recognized his unique gift. His first exposure to music came from his religious Seventh-day Adventist family. His mother was an organist on the choir at the local church in the Saint Andrews Parish, Kingston, Jamaica. Interestingly, his stage name came from a family member who had difficulty pronouncing his name right.

In 1961, U-Roy began working with a sound system called Dickie Wong’s sound system. His career would see him move through several different systems as he tried to find his own sound. His first single, “Dynamic Fashion Way,” would come in 1969 and was produced by Keith Hudson production. Following that, he released another successful single called “Earth’s Rightful Ruler,” which was produced by the legendary Lee “Scratch” Perry, who himself was a young veteran at the time. That track included late reggae superstar Peter Tosh.

It would be his toasting skills that ultimately helped him jump into the Jamaican limelight. His true recognition as a master toaster came after his first two singles on Duke Reid’s Treasure Isle label, “Wake the Town” and “Wear You to the Ball,” both in 1970. His career took off after those hits, and he would eventually tour the UK in 1972 with artists Roy Shirley and Max Romeo flying the Jamaican flag proudly. His 1975 album, Dread in a Babylon, was very well received in the UK. The success of the project led him to work with Tony Robinson and released a series of albums, including Natty Rebel, Rasta Ambassador, and Jah Son of Africa.

U-Roy used his success to inspire others to take up the microphone, and in 1978, he began his own sound system, named Stur Gav, after his sons. Many young artistes at the time, like Charlie Chaplin and Josey Wales, benefitted from the label and his mentorship. His last album, Pray Fi Di People, was released in 2012.

Daddy U-Roy’s music was also featured on the album True Love by Toots and the Maytals, which won a Grammy Award in 2004 for Best Reggae Album. His herculean effort in promoting Jamaican music was recognized by the government in 2007 when he was awarded Jamaica’s Order of Distinction. His style of music is also credited as one of the heavy influences in the birth of hip-hop when Jamaican-born disc jockey DJ Kool Herc infamously brought the same “toasting” sound to the Bronx in the early 1970s. Herc, whose real name is Clive Campbell, is widely regarded as the founding father of hip hop. It was at a birthday party for his sister in the Bronx on August 11, 1973, when DJ Kool Herc gave birth to what would become hip hop music. Had it not been for U-Roy’s invention of toasting, Herc, who was born in Kingston before immigrated to the United States at the age of 10, might not have introduced the sound to the masses at his sister’s birthday party some five decades ago.

U-Roy is also considered one of the Rastafarians that push the Rastafarian faith to the world. All of his 24 albums focused on some aspects of Rastafarianism. Without a doubt, many dancehall artistes owe their careers to U-Roy. Veteran artiste Shaggy took some time out to pay tribute to the late reggae/dancehall icon on Instagram.

He wrote, “Today we lost one of our heros !! A true legend in this game of dance hall/ Reggae if your a fan of sound system, then your a fan of Stur Gav sound. With such greats as Colonel Josey Whales (sic) and Charlie Chaplin, pioneers in this game … with a catalogue of amazing recordings U Roy was a master at his craft. Rest Well daddy Roy!! R.I.P. walk good.”

A post shared by Shaggy Aka Mr Boombastic O.D (@direalshaggy)

On Twitter, British DJ David Rodigan also left a heartwarming message. “RIP Daddy U Roy the iconic toaster who changed the paradigm of Jamaican music when he voiced the ‘Version Galore’ album …I was always in awe of him; the tone of voice, the cadence, the lyrical shimmering and riddim riding made him ‘the soul adventurer'”, he posted.

U-Roy, who is widely regarded as The Originator, has a permanent place in reggae/dancehall and hip hop music history.