When you mention the name Azealia Banks, you’re bound to get a few screwed up faces in response. The singer frequently rages and rants online, and this time she’s putting her controversial tongue onto the topic of abuse. The rapper, singer, songwriter, and actress entered the music scene back in 2008 when she was only 17 years old. By the age of 18, she was signed to XL Recordings and released her debut single “212 ” in 2011. Her fresh new style was a blend of traditional hip hop, and household beats blended with her free-and-easy lyrics held a lot of potential. Her talent was undeniable. Just over a decade later, Azealia is more commonly known for her numerous online feuds with multiple celebrities. Azealia has been called the “Donald Trump” of black people and has had feuds with everyone ranging from Skai Jackson to Beyoncé.

On Tuesday, she took to Instagram and began to violently lash out, speaking on black women enduring abuse, expressing that she herself is asked to put up or shut up when she starts speaking on her truth. The controversial figure posted on her story weighing in on the infamous shooting incident that took place last year between Megan Thee Stallion and Torey Lanez. Banks suggested that Meg is using the “protect black women trauma narrative to capitalize” on the situation.

In a message on her IG story, she wrote on one slide, “AOC almost get assassinated and compounds the story with some random hot button account of sexual assault: support and believe women.”

She continued, “Meg Thee Stallion *allegedly*” gets shot by Tory Lanez on a messy drunk night out then uses the protect black women trauma narrative to capitalize on and basically use Breonna Taylor’s horrifying death as a prop to virtue signal: Protect black women at all costs (despite not seeing any X-rays of bullets in her foot). 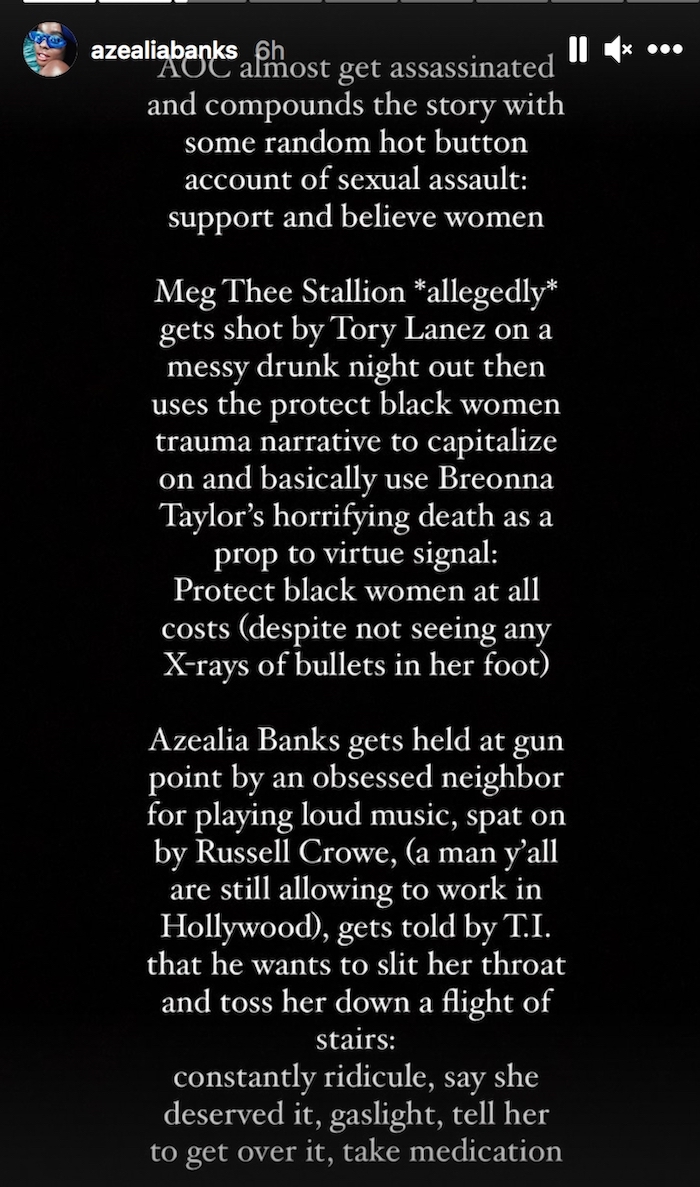 Then in expressing her own trauma, she divulged, “Azealia Banks gets held at gun point by an obsessed neighbor for playing loud music, spat on by Russell Crowe, (a man y’alI are still allowing to work in Hollywood), gets told by T.I. that he wants to slit her throat and toss her down a flight of stairs: constantly ridicule, say she deserved it, gaslight, tell her to get over it, take medication.”

Driving her thought home, she sounded off in another post on her Instagram story, writing, “If I have to s*ck it up, get over it and wallow in a pile of compounding trauma…So do AOC and Meg. If I don’t get to use the race card, or the “protect and believe women,” card neither do they.” 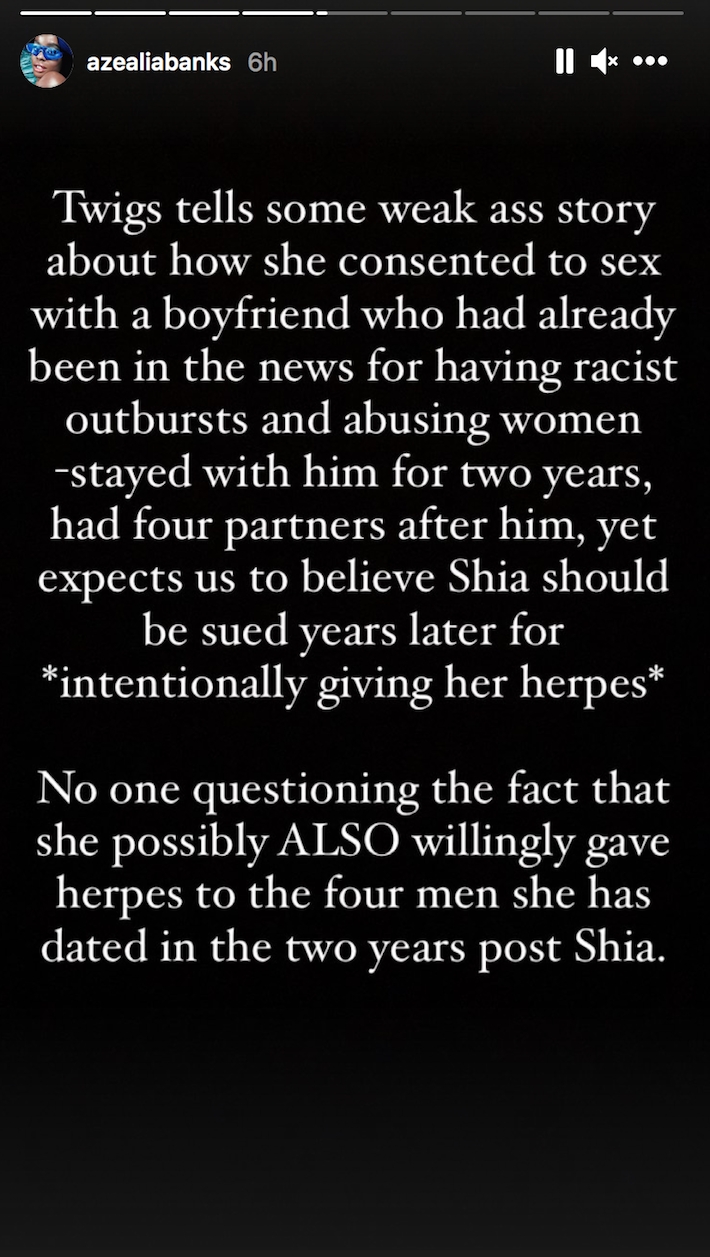 There were a small number of key players who supported her and gave their “unpopular opinion.” However, the vast majority bashed her and stated that she should not need to downplay another woman’s situation to speak out about her own. They further added that Azealia is the cause of her own ill-treatment, rehashing all the times that she has been disrespected in the past. 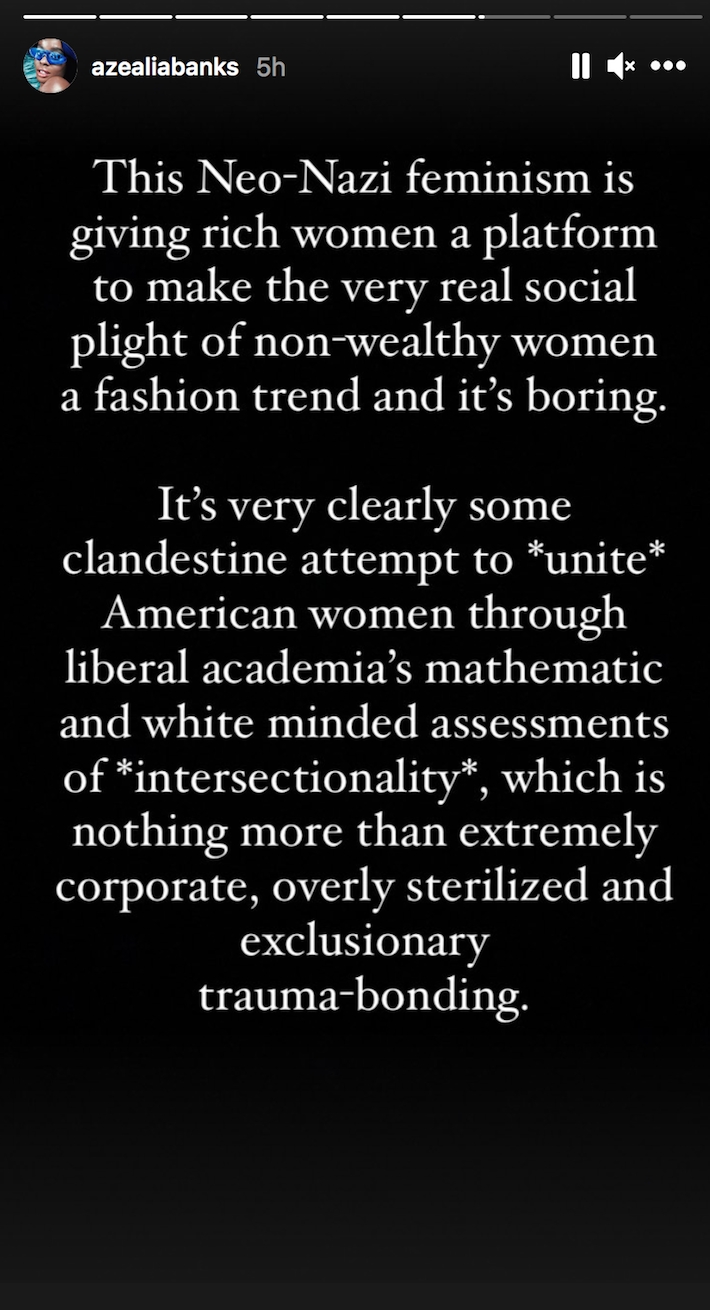 What say you of this whole dilemma?