We are now at the end of the year, which means it’s time to take a look back at what we did and how we can improve our lives in just about every aspect. This usually entails how entertainers are able to release more lucrative content and keep their fans interested in their brand. Before they are able to tweak their strategies, they need to take a look at what’s been working what needs to go. Thankfully online streaming and sales platforms make this really easy for their users. One company leading the charge in that area is Spotify, with their Artist Wrapped feature.

The days and weeks following Spotify’s yearly roundup are usually pretty interesting. Since its inception, Spotify’s yearly roundup has become one of the best guides to measure just how an entertainer is reaching his audience, along with who’s really making bank. It’s extremely important for entertainers based in regions such as the Caribbean, where the service isn’t supported. This means the data is strictly a reflection of how one’s music is being received on the global market.

Quite a few dancehall acts have decided to share their numbers with the adoring fans who have supported them to make the figures we are about to mention possible. For others, we can only assume where they stand and just how far around the globe their much reached in a year where everyone was locked inside.

Sean Paul is one of the most successful entertainers to have emerged out of Jamaica. The 47-year-old has been doing big for more than two decades, securing a Grammy win and numerous other awards in the process. He has also collaborated with numerous other international acts such as Beyonce’, Blu Cantrell, Estelle, Clean Bandit, Kelly Rowland, Migos, Tory Lanez, Dua Lipa, Rihanna, J Balvin, Sia, and the list could go on for quite a while. His work ethic has seen him being labeled as one of the most consistent entertainers in the world by his fans. This year Sean’s outputs centered around his homegrown, linking with talents in Jamaica such as Leftside, as well as dropping his own material. That didn’t stop him from bringing in the bacon. According to Spotify, he received 625.9 streams on their platform. That’s a whole lot! Like other artists on the list, his music was streamed in the 92 territories Spotify supports. You can check out his scoreboard to see all the other interesting stats. 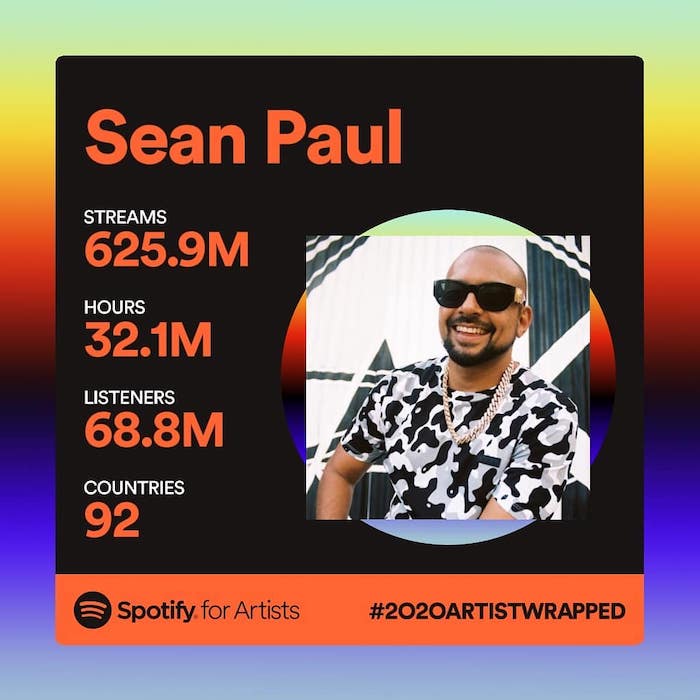 Moving down on the list, we stumble upon the Unruly boss himself, Popcaan. Despite the treacherous year, Miss Rona’s son had one of the best 12 months of his career in 2020. He built a steady foundation on 2019’s Vanquish and his well-supported stage show, Unruly Fest. Public gatherings were and are strictly prohibited on the island, which translates into his annual show being shelved. Is that the reason why Popcaan doubled his efforts in terms of musical releases this year? That theory has not been confirmed, but it is truly a plausible one. At times, the inspiration is of little importance to the fans once they are getting great music. The former GAZA student delivered in fine style with a brand new album and mixtape titled FIXTAPE. The project features all your favorites and then some. Being an OVO Sound Signee has its perks as Poppi was able to feature French Montana, PartyNextDoor, and Drake as international collaborators. He also ensured the project had a bevy of local acts such as Masicka, Jada Kingdom, Stylo G, and Tommy Lee. That project was followed by a collaborative effort with his Canadian labelmate Preme, as they worked on ‘Link Up.’ To complement the international collaborations mentioned, he has been featured on tracks with UK rapper Loski, American supergroup Maroon 5, Megan Thee Stallion, Jorja Smith, and Wiz Khalifa, to name a few. All that work as produced 148.7 million streams on Spotify. 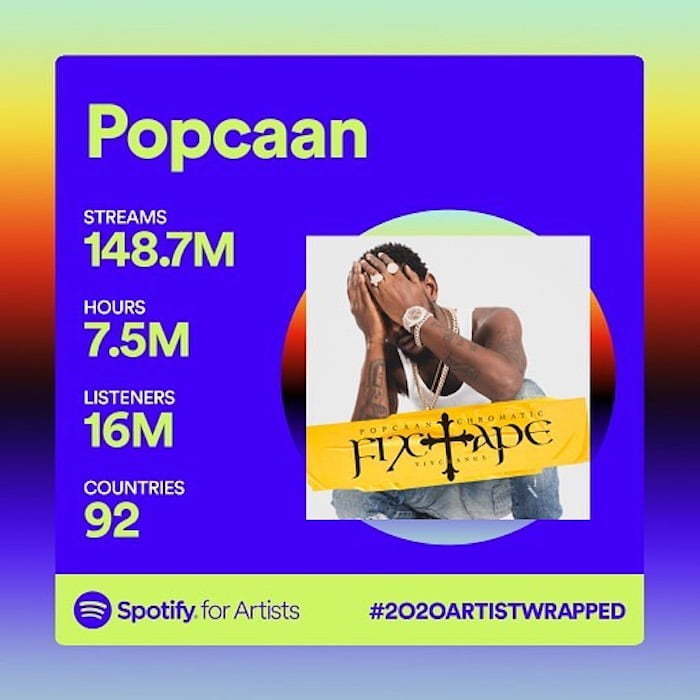 The master has become the student for this upcoming entry. The Worl’boss, The Teacha, The King of The Dancehall, whichever one of those titles you use to address Vybz Kartel is quite fine. He has been around and continues to stay around even when the law of the land and many others say he shouldn’t be. While he’s no longer physically present in the streets, a state that could change, his music has never left in the near 10 years he has been behind bars. Armed with a unique character, an even more twisted sense of humor, and talent unlike anything Jamaica has seen, there is no other spot for him than near the top of the list. As per the breakdown of his Spotify Wrap, his music was streamed in 92 countries, with Russia showing him the most love. 5.8 million streaming hours were recorded from 8.5 million people, and his songs were added to 344,375 different playlists.

The Worl’boss released two full-length albums in 2020, along with a plethora of singles. Back in May of this year, it was alleged that To Tanesha, which was released in January 2020, earned the entertainer a whopping J$73 million. He would go on to release the feature laced Of Dons & Divas in June of this year. There is no word on just how much the deejay has earned from his last project. Let’s not forget that the artiste’s older material is considered some of his best work. Therefore, many of his prior hits may have contributed to his staggering numbers of 130.3 million streams. 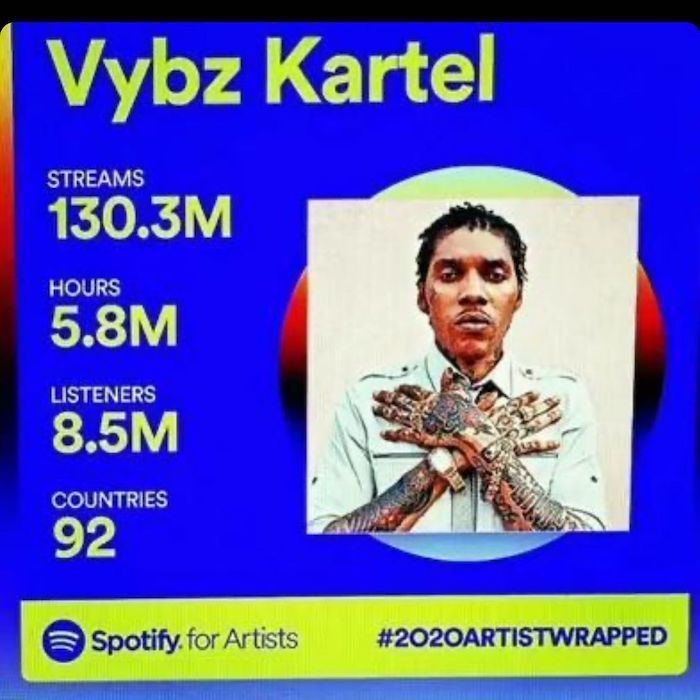 Dancehall acts based in different regions of the world hold these upcoming spots.

First up is US-based artiste Kranium with 67 million streams. The singer’s breakout, now gold-selling single “Nobody Has To Know,” set the tone for the artiste’s career, which is more or less centered around his controversial takes on relationship woes. He has worked with Alkaline, Skillibeng, Rotimi, Ty Dolla $ign, WizKid, Tory Lanez, Burna Boy, and African princess Tiwa Savage. The latter worked with him on the remix for his biggest track of the year, “Gal Policy.”

Other releases for the year include “Through The Window,” “I Got You,” “Quarantine Clean,” and “Money In the Bank.” By the looks of it, the strength of his streams also relied on his December 2019 album titled Kranium, among other hits such as “Can’t Believe” and “We Can.” The Atlantic Records artiste knows a thing or two about the right time to release his projects. 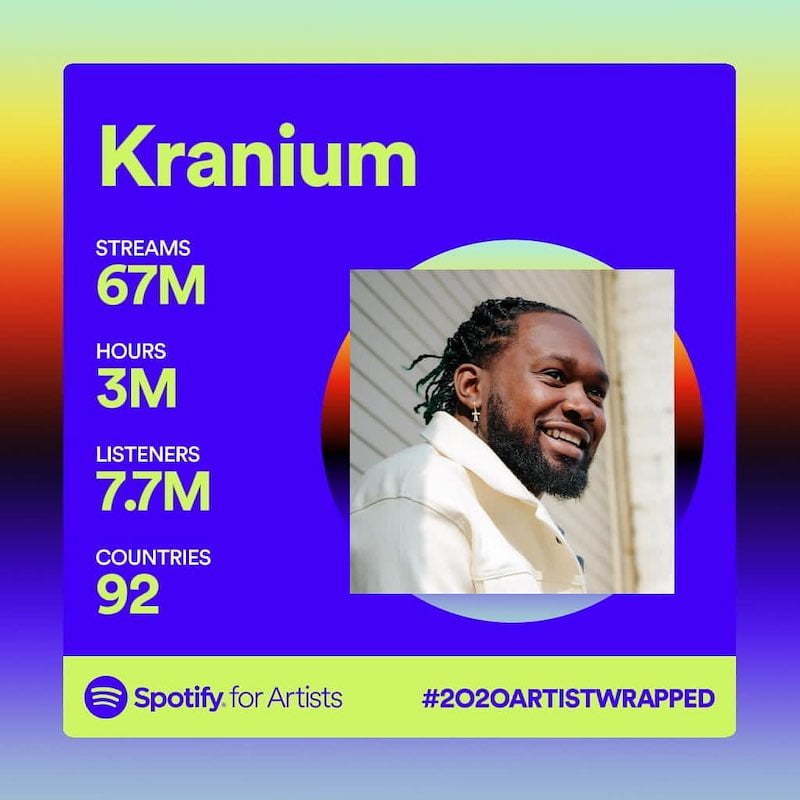 It’s now time to feature the UK-Dancehall Bounty Stylo G. In the words of Meek Mill, he “did it without an album.” Stylo has been providing his fans with nothing but cleverly crafted hits since getting his big break. The Spanish Town, Jamaica bred talent had been working on his career for a number of years while in England before securing “Call Mi A Yardie.” His other major follow up hit to truly crack home in JA and worldwide came in the form of “Yuzimme.” It was evident that there were greater things in the works for the artiste, and those blossomed when “Touch Down” featuring Vybz Kartel and Nicki Minaj. A supercharged remix of “Dumplin,” which featured Spice and Sean Paul, soon followed, among other collaborations.

That was then, how about this year? His numbers can confirm that his 2020 releases were no slouch either. Think “BAM BAM,” “Too Hot,” “Live For The Summer,” and “Put Eh Dung.” He has also seen success in the Indian market, with his feature on “MIRCHI” by DIVINE. A look at Stylo’s recent discography will show only singles, which really begs the question of how his numbers would look if he actually dropped an album. So far, he has clocked 34.1 million. He is also set to perform on the upcoming MOBO Awards stage. What a way to end the year. 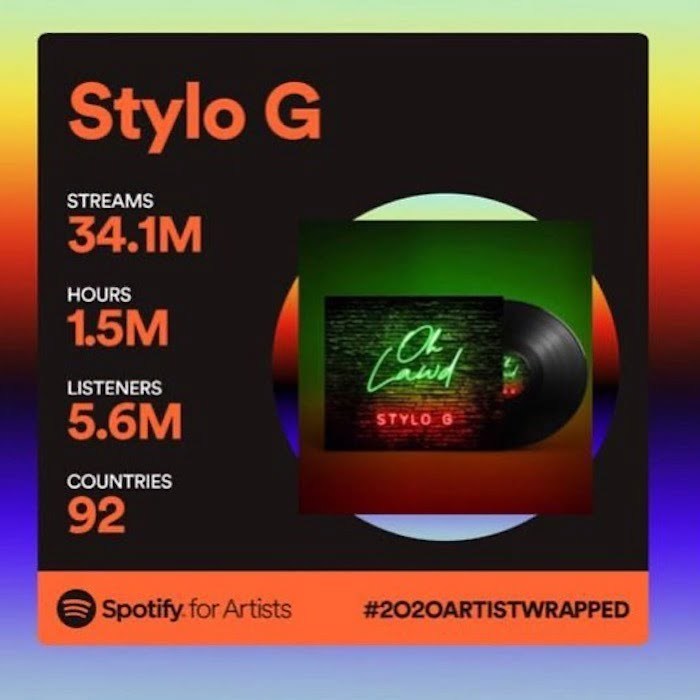 Dappa Don, Dexta Daps steps up with a huge increase in streaming numbers on Spotify when compared to last year. He nearly doubled his 2019 tally of 12.8 million with a much deserved 21.8 million for 2020. The singer has been thrilling the ladies for years now, and he’s showing no signs of stopping. Beautiful melodies, energetic performance, and clever yet provocative/ raunchy lyrics are the qualities Dexta is best known for. Older Dexta fans will keep going back to his breakout single “7Eleven” and may just stay for a bit of “Chinese Jordan” and “F U.”

Dexta Daps would go on to provide his debut album titled Intro, ultimately sending females in a frenzy with a couple steaming x-rated music videos. The tracks followed suit with “Owner, “F**k U Mean,” and “Mi C Mi Bed N Miss U” finding special places in the hearts and minds of his female fans. Earlier this year, Dexta provided his sophomore project titled Vent. He employed a similar format of lavish visuals to promote the album. The 16-track project features Beenie Man, Spice, Ikaya, Chronic Law, and Blakmann. His efforts have seen him breaking on the Billboard Reggae charts for the first time. 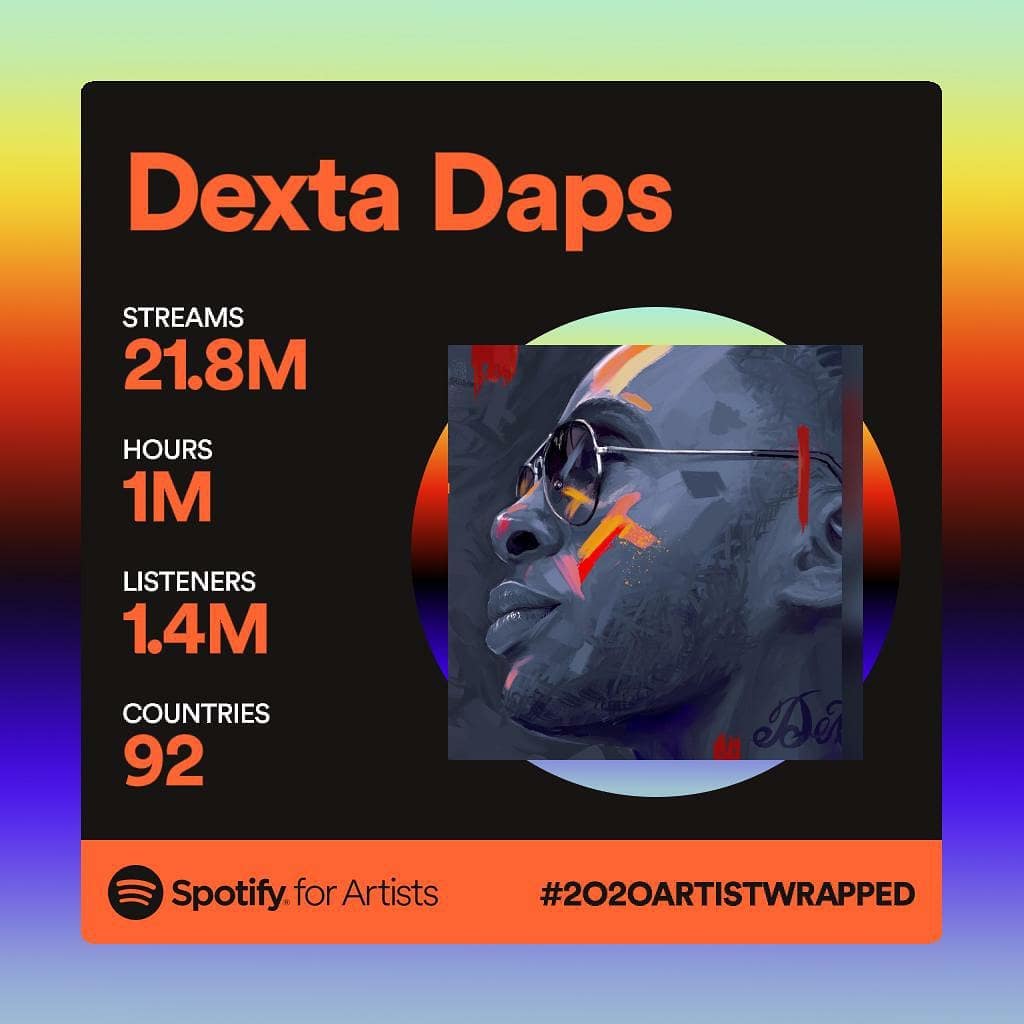 That’s it! Those are some of the numbers which have been shared with the public. Fans are still awaiting the likes of Shenseea and Rvssian, who have yet to share their Spotify numbers, thus making our placement chart a bit difficult to complete.