Freddie Gibbs reminded T.I. that he had a fight with Floyd Mayweather in another city.

Any time a celebrity comes forward to criticize any type of behavior, people are always quick to dig up the past and suggest that people in glass houses should stop throwing stones. Taking to Instagram in the aftermath of an Atlanta shootout involving Chicago rapper King Von, Tip wrote, “Atlanta is a beautiful progressive city filled with black excellence. We uplift each other & win together. Stop coming here to kill each other. That sh*t is played out. –Management”. While the call to put a stop to the violence is admirable, it seems that some readers of T.I.’s PSA felt that the post was a bit hypocritical.

Several big names came forward to question Tip’s perspective, including 50 Cent, Waka Flocka, and King Von’s sister, and T.I. quickly responded by claiming that his post had nothing to do with Von’s death.

Now, Freddie Gibbs is adding to the backlash by reminding Tip that he once left his own city to handle out-of-area beef as well. “Tip U went to Vegas and fought Floyd Mayweather tho,” said Gibbs in response to T.I.’s post. The incident Freddie is referring to went down in 2014 and was rumored to be the result of a dispute involving T.I.’s wife, Tiny. 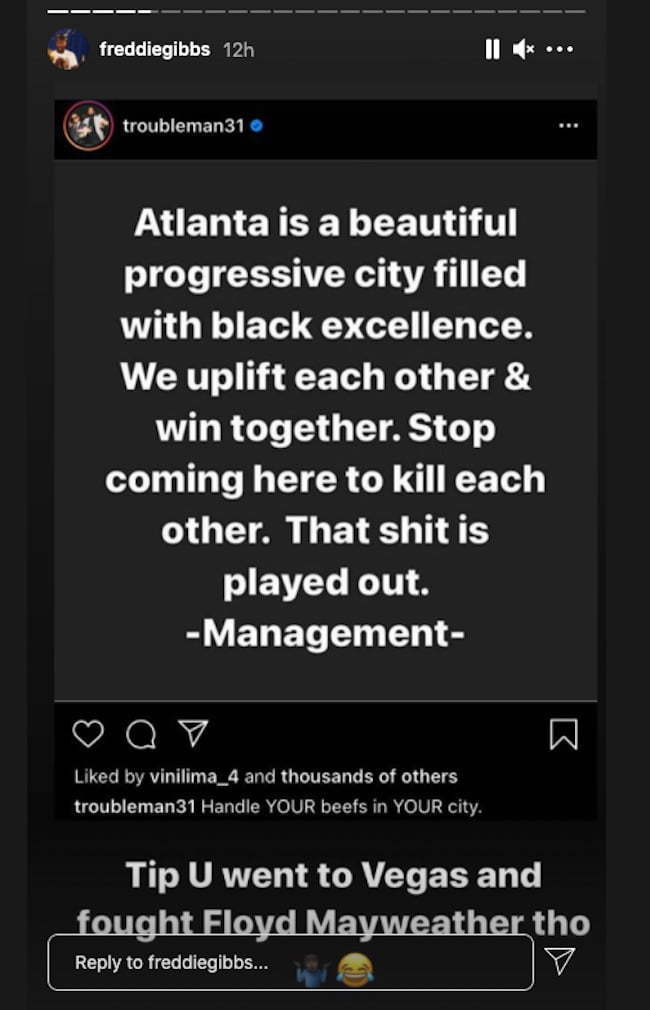 50 Cent also seems to feel strongly about T.I.’s original post, reposting Von’s sister’s IG Story and adding, “A @troubleman31 you gotta chill, you bugging for saying anything. They got casualties this is real sh*t, I don’t know what you as thinking but re think it now. They hurting, they love that boy he was a way out. I bet you don’t even realize they will kill you for what you just said.” Despite the uproar and suggestions that Tip’s post was disrespectful, T.I. has chosen to stand by his words and keep the post up on his page for now.