The Weeknd show off his Spanish skills on Maluma’s new “Hawái (Remix).”

The Weeknd is a force to be reckoned with, constantly showing off his hit-making talent and incredible versatility every time he embarks on a new project. Now the XO superstar has ventured into the world of Latin music, teaming up with Maluma for a bilingual remix to his hit song “Hawai”. Despite the track being Abel’s first time showing off his Spanish singing skills, he delivers a fluid and edgy performance, proving once again that he is a true artist. Teasing the track with a tweet saying, “el fin de semana!!” Weeknd dropped the song and accompanying video on Thursday.

Speaking with Apple Music about the collaboration, Maluma couldn’t say enough good things about his song-mate, gushing, “Bro, he killed it, because he’s a real artist. He’s a real artist, man, what he did in this song. For him, it was like he was doing reggaeton for his whole life. And I knew that his voice in the song could work amazing. And that’s what happened.” The Latin superstar went on to add, “I couldn’t believe how good it was mixing his vocals with my vocals. And man, yeah, I’m blessed. I’m very happy. This is a huge moment for the Latin culture.” 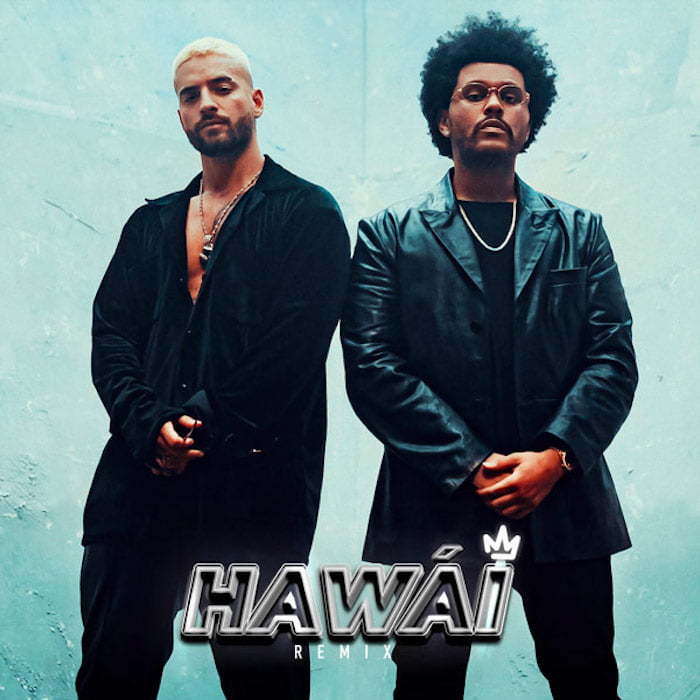 The track, produced by Rude Boyz, debuted alongside a video directed by Jessy Terrero and shot in Los Angeles. Never one to shy away from heartbreak and pain, The Weeknd added the perfect moody vibe to Maluma’s upbeat breakup anthem.

Meanwhile, fans await news of The Weeknd’s next big project, which is reportedly under production and said to be released sometime after quarantine ends, whenever that may be. The good news is that Abel has certainly been staying busy and continues to drop surprises for his fans to keep us all entertained while we wait for the next album.