Offset will be going earring shopping soon after losing all of 6 karats at while partying hard over the weekend.

Migos rapper Offset has been working tremendously hard to get his Mrs. WAP back, following Cardi B’s call for a divorce. Yet it seems with his greatest desire now back within ‘tasting’ distance, he is being made to come to grips with another loss. The loss in question is one of the rapper’s prized earpieces, his 6 karat diamond earring. By Offset’s reaction, the loss is surely not as detrimental as it would have been to miss out on the wild celebrations with his lovely wife, Cardi B. However, it was enough for him to take to Instagram to share an image of his earlobe, which now only contains the holster that held the huge rock.

“6 karat gone didn’t even notice till I woke up this morning #sh*thurt,” he wrote in the caption below the image. 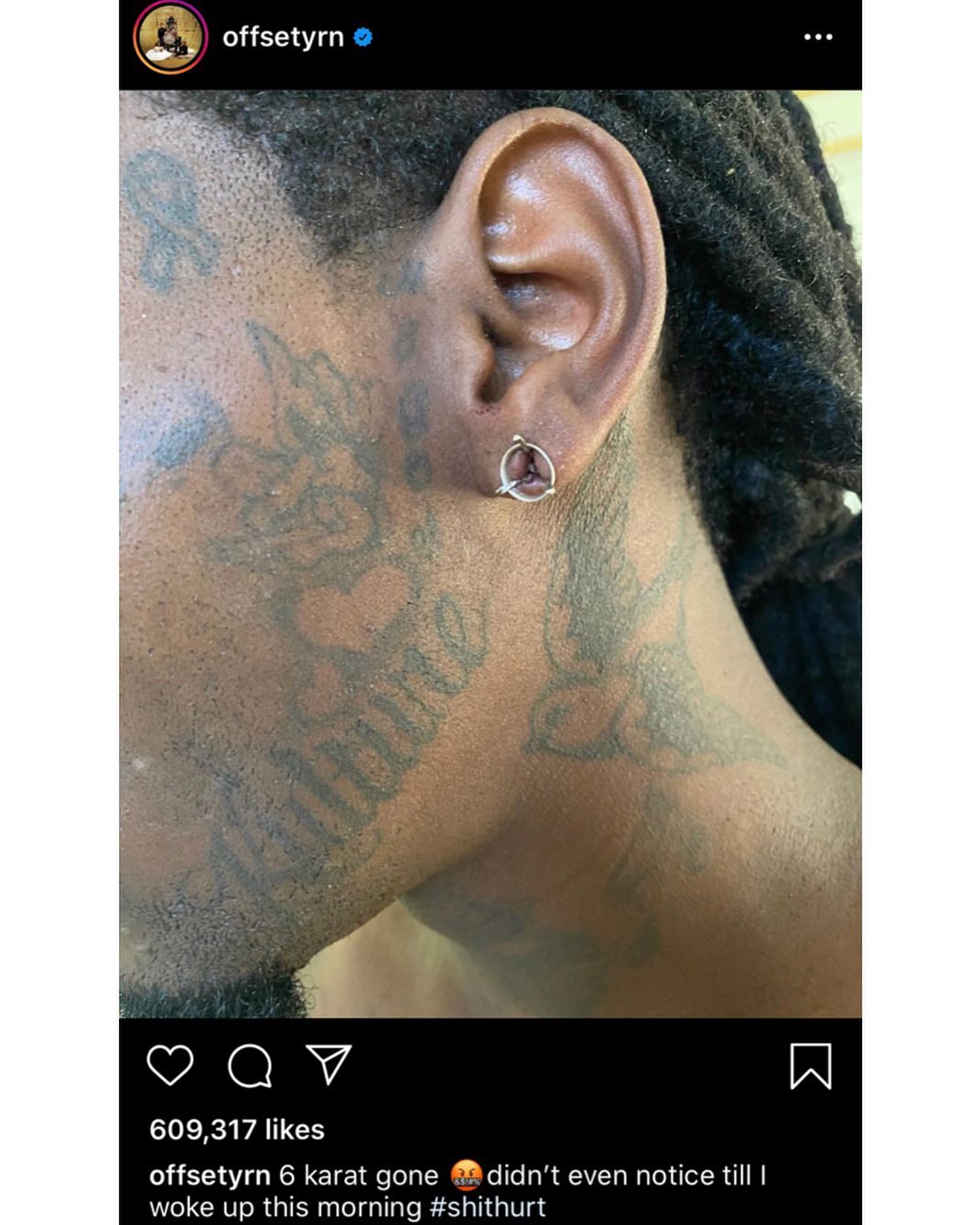 Offset was still sporting the rock and the title of her estranged husband when he partied with Cardi B at a Las Vegas night club to officially ring in the “Bodak Yellow” rapper’s 28th birthday. Offset pulled all the stops to ensure his wife had a great birthday, from a billboard sign featuring her and their daughter Kulture to a Rolls Royce Cullinan completed with a custom baby seat. The rapper received a much-deserved kiss from his woman and even had fans chanting for her to take him back. As they would have it, a lovestruck Offset did accompany the birthday queen back to the humble abode where the party continued through to the morning.

Cardi B and her friends popped their booties to a number of Jamaican hits, and the “Be Careful” rapper even performed a death-defying stunt now perfected by Jamaicans. The exact move saw her leaping from a platform before landing on Offset, where she continued her grinding. Could this be when the Migos rapper lost his rock? It’s definitely hard to tell but what seems a little bit easier to decipher is that Cardi B and Offset seem to be in a much better place in their relationship.

“I just got tired of f***ing arguing. I got tired of not seeing things eye to eye. When you feel like it’s just not the same anymore, before you actually get cheated on, I’d rather just leave,” explained Cardi B a few weeks ago while speaking about her divorce.

Thankfully they’ve found a spark to cling to.