Cardi B is having the time of her life as her breakout hit “Bodak Yellow (Money Moves)” is slated to reach No. 1 on Billboard Hot 100.

Come next week things will likely look a lot different on the top ten singles on the chart as Cardi B is expected to overthrow Taylor Swift for the top spot. According to Charts Data, “Bodak Yellow” was the most streamed single in the US this week with 40.8 million streams. The single also continues to show strong digital sales with 30,272 units sold. “Cardi B’s “Bodak Yellow” is expected to reach #1 on next week’s Hot 100,” Charts Data wrote on Twitter. 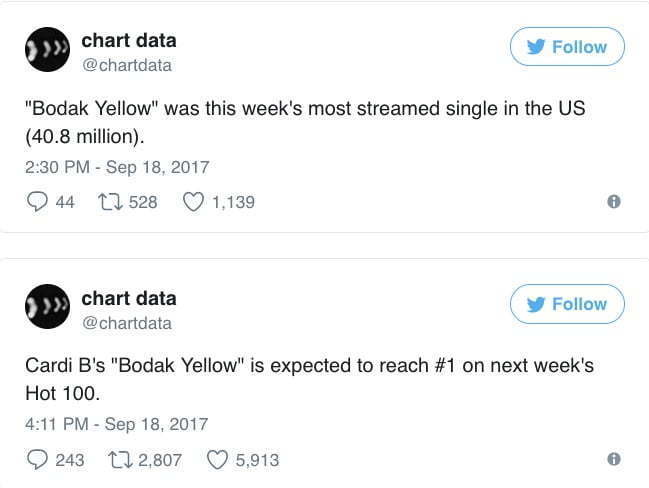 Billboard updates all its charts every Tuesday after compiling streaming, sales, and airplay of songs across all genre of music. “Bodak Yellow” has been climbing the Hot 100 chart for weeks and has been lingering in the top five for a few weeks now. The success prompted a new round of promotion from her label Atlantic Records. The single was certified gold by the Recording Industry Association of America (RIAA) and could reach platinum in a matter of weeks. The last time a female rapper was this dominant on the chart was in 2014 when Nicki Minaj’s “Anaconda” peaked at No. 2 on the Hot 100. In comparison, Nicki Minaj has yet to score her first solo No. 1 single, which means Cardi B could do it before her.