Charlamagne Tha God has some words for Joe Budden amid his beef with Spotify.

Two years after cutting ties with media giant Complex over internal tiffs, Joe Budden has hit another impasse with current employers, Spotify. The prolific podcaster has announced he’s leaving the platform, firing off at his former partners in a series of since-deleted tweets. The Breakfast Club hosts weighed in on the development, and Charlamagne Tha God cited a pattern in Budden’s business affairs, two of which ended because he felt “undermined and undervalued.” “If you keep having the same issues with various companies because it was the same thing at Complex, it’s probably not them. It’s probably you, Joe,” Charlamagne quipped, pointing out the common denominator on either deal.

On August 27, Spotify confirmed the split in a short statement saying that they made Joe Budden a substantial offer to stay on Spotify, but he declined the offer, which is now the source of his fury on social media.

Joe went off in his response, hinting at simmering issues that ran much deeper than paperwork. “F*** y’all & that deal,” Budden tweeted, following up with a list of accusations against Spotify on The Joe Budden Podcast with Rory & Mal. He insisted that after his exclusive show exceeded all Spotify’s metrics and audience reach expectations, he never got a bonus from the company, received Christmas or New Year’s vacations, and was obligated even during his dad’s life-threatening sickness. 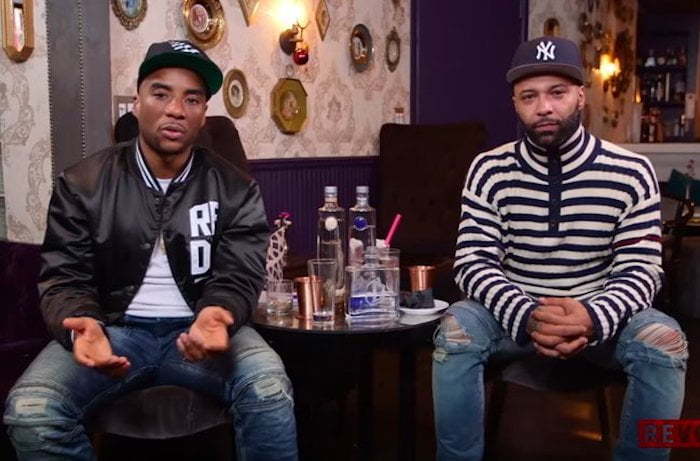 But fellow music journalist Charlamagne Tha God sensed a similarity and shared his take on the row. “It sounds to me like Joe Budden is a person who knows his worth but doesn’t know how to properly negotiate it, ’cause if you keep doing deals with various corporations and you keep getting trash-a** deals, that’s on you,” Charlamagne said.

Suggesting Budden might be lax in his negotiation skills, Charlamagne Tha God suggested Joe was towing a tricky line likening his value to his larger cohorts. “Also, too, when I heard Joe comparing his show to like Spotify signing Gimlet for hundreds of millions and The Ringer for hundreds of millions, I think it’s very important to note that they got that money from Spotify because they are actual networks with tons of IP.”

Convinced of his impact, market value, and worth, Budden remained adamant that he’s leaving. The well-positioned critic seems certain of where “podcasting is taking us for the next five years” and that there’ll definitely be other offers. “Charlamagne, Joe Budden is a network. We’ll talk later,” he tweeted, as fans speculate that this is an indication of his growing ambitions. Charlamagne’s Breakfast Club contract expires in September, and with the veteran declining to renew, many think Budden is cooking up a collaboration between both cultural critics.

While that manifests, it’s increasingly clear that this may be Spotify’s loss after all. The internet has already decided who they’re with, in what looks like a repeat of Budden’s everyday Struggle departure only two years ago. “Been following the @JoeBudden journey for years now. As a creative it’s inspiring to see the courage and experience required to disrupt the market. He continuously drops a trail of gems/breadcrumbs for others to follow behind him. It’s not for everybody!” one fan said.

Another pointed out Spotify’s pending dip in numbers since the podcast was many persons’ only reason for a subscription. “The fact that @JoeBudden’s announcement of his upcoming departure from Spotify is getting major coverage should tell you the impact he has on the platform. I, like many others, have Spotify because of him.”