Popcaan and Konshens are declaring they’re COVID free as other dancehall acts goes into lockdown.

Scores of celebrities seen at recent birthday soirées are scrambling to clear their names after Bolt, who hosted a breakfast party, tested positive for COVID-19. As coronavirus cases spike sharply in Jamaica, some members of the entertainment fraternity are now in an all-out bid to declare their sound health. Many industry players were spotted out, about, and mask free over the weekend at celebrations for Beenie Man and Usain Bolt. The latter has since tested positive for the highly infectious illness, and patrons seen at either event have been responding with declarations that they’re in the best of health.

Popcaan, Konshens, Munga Honorable, and Christopher Martin were swift with the updates as the Prime Minister promised investigations into protocol breaches. The Unruly Boss issued his own PSA in light of concerns he’s contracted the Covid-19 virus. Donning his branded garb with a matching studded mask, the “Unda Dirt” deejay warned and informed his two million fans, “Me nuh have no covid 19 a must the glock 19..!!! wear unu mask!!!” The 876 god gave the King of the Dancehall a full embrace at his birthday party, and it’s unclear whether he’s gotten tested despite his witty update.

Konshens, who also attended Beenie Man’s Kaya Herb House get-together, went a step further to provide proof that he’s all clear. Sharing his COVID-19 test results today on his Instagram, the “Show Yourself” hitmaker hit back at the blogs and trolls in his caption. “ppl saw me going in an coming out suh mi jus a show dis b4 u guh hear seh….. Dem bad. Soon delete.” 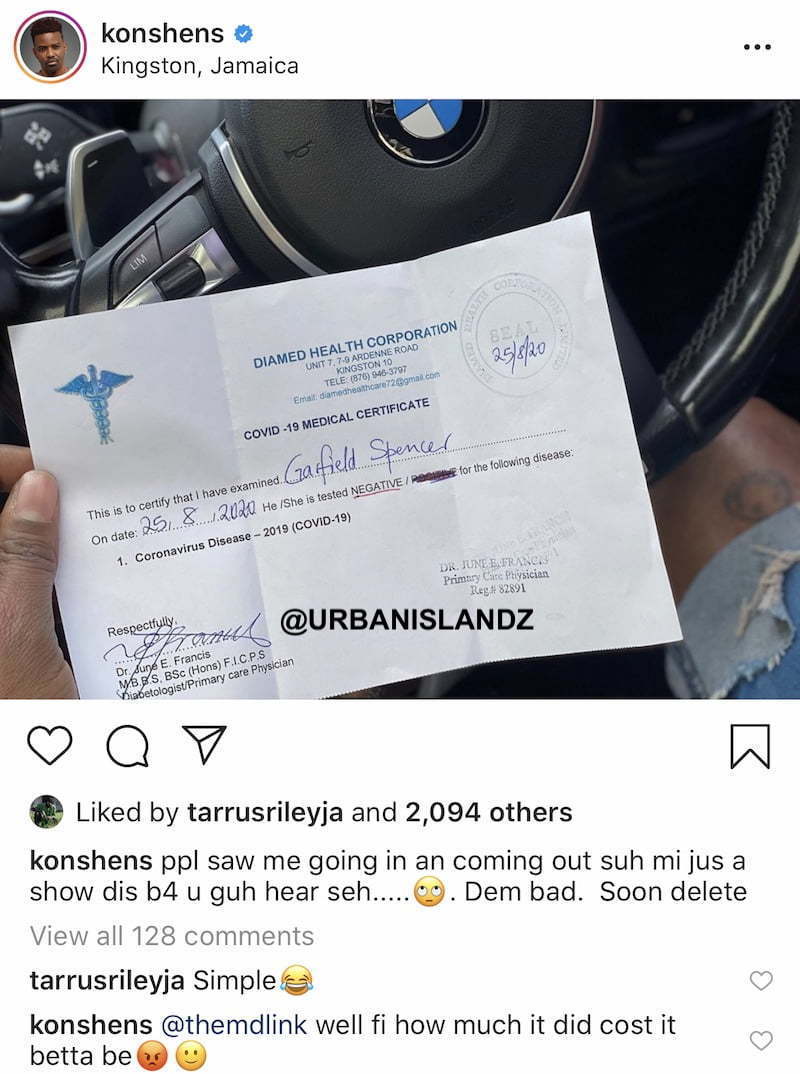 Munga Honourable, who was front and center in the Ravers Clavers ring at Bolt’s breakfast bash, has since issued a statement via his attorney shedding light on his status. “Munga was at Usain Bolt’s party over the weekend. He is not showing any symptoms of COVID-19, he is quite comfortable. Right now, he is at the studio working,” Christopher Townsend, the deejay’s attorney, told the Observer. The “Flippin Rhymes” deejay, who was specially invited, is also featured on Bolt’s Olympe Rosé Riddim with fellow singjay Chris Martin.

Like Munga, Martin also put out a statement as rumors swirled. Martin’s manager, Lyndon “Kingy” Lettman, confirmed the developments with the Observer as well. “Christopher Martin is isolating himself. The test was done yesterday as a precautionary measure. He is feeling no symptoms but, to be sure, he is self-isolating to secure his family and friends because it is the right thing to do,” Lettman said.

Ding Dong, who removed his posts of Bolt’s birthday shenanigans after the firestorm started, has been silent on his own safety measures since the sprint legend tested positive. Desha Ravers, who is Beenie’s daughter and was actually at both events, has dipped on social media as well. Prime Minister Andrew Holness yesterday weighed in on the celebrity carrying-on, suggesting there would be no special treatment for those involved.

“The police are investigating. They are looking into all aspects of the matter, so no one is going to be treated with any exemption or given any special treatment,” Prime Minister Holness said. “All Jamaicans have a duty, and, of course, those who have the public ear and have influence in public spheres, they have an even greater duty.”