Lil Durk insists that Drake is the new Michael Jackson and even addressed his supposed Tekashi 6ix9ine diss on “Laugh Now Cry Later.”

It seems Fat Joe wasn’t so off with his Drake and Michael Jackson comparison as Lil Durk agrees. Fat Joe put himself in a Twitter firestorm last week when he dared to compare the Six God to the King of Pop. At the time, the “Family Ties” rapper had been conducting a chat on Instagram Live with Rick Ross, who is good mates with Drake. “Drake is possibly the hardest person to get in touch with and let’s be clear, every song he does goes No. 1 and he’s just like, the Michael Jackson of this time,” Fat Joe innocently said. His remark created a storm on social media, however, with some questioning whether he was right in the head.

For all the flack that The Bronx artist received, Lil Durk reckons he’s not that far off the mark. The Chicago rapper is featured on Drake’s latest single, “Laugh Now Cry Later,” which is also the first off his upcoming album, Certified Lover Boy. Lil Durk’s took to his IG Story to share just how great he thinks Drizzy is. “Don’t call em drake nomo his new name Michael Jackson,” Durk wrote. 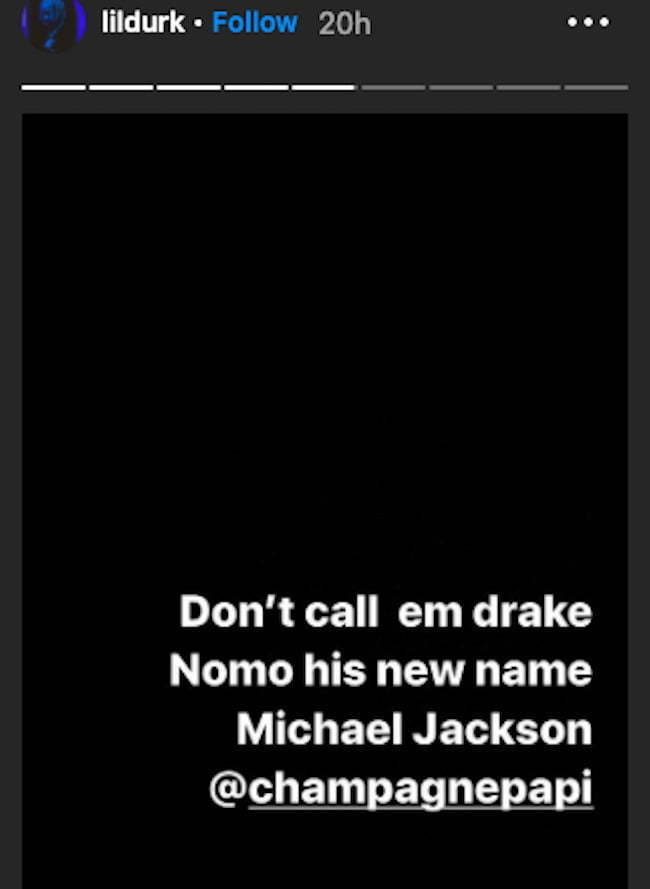 Lil Durk got a lot of attention last weekend after Drake dropped “Laugh Now Cry Later.” The single is expected to debut at the top of the Billboard chart next week if it can overthrow Cardi B and Megan Thee Stallion’s “WAP.” Durk also got some attention for seemingly taking a jab at snitch rapper Tekashi 6ix9ine. “I’m in the trenches, relax / Can you not play that lil’ boy in the club? ‘Cause we do not listen to rats,” the Chi-Town rapper raps.

Durk addressed the issue during his interview with Power 106, saying, “Whoever make music and rat, I’m talking to you. It can be one person, two people, three people, I’m talking to your a*s.” He makes it clear that music from rats will not be playing in the clubs when he is out partying.