Drake takes a swipe at Mavado on Popcaan’s IG Live, while telling him to take a seat and drink some bag juice.

Popcaan released a new project last night titled FIXTAPE. The 32-track compilation features Quada, Masicka, Jada Kingdom, Bakersteez, French Montana, PARTYNEXTDOOR, Tommy Lee Sparta, Skillibeng, Stylo G, and most noteworthy Drake. The OVO boss collabs with Poppy on two tracks on the album, and fans are loving it. In celebration of the massive project, Popcaan held a little get-together with his crew and hopped onto Instagram Live to revel at the moment with his fans.

During the Live, rapper Drake joined in and was in a celebratory mood himself with a glass of wine in his hand. The rapper seemed excited about the Unruly Boss’s new drop and took part in the festivities, although he could not be there in person. Interestingly Drake also decided to use the moment to take a shot at dancehall deejay Mavado, who he has been beefing with for the last two weeks. This feud was birthed from Drake’s “Only You Freestyle,” during which he seemingly dissed Mavado announcing his allegiance to Gaza while speaking ill of Cassava Piece, which is Mavado’s hometown. 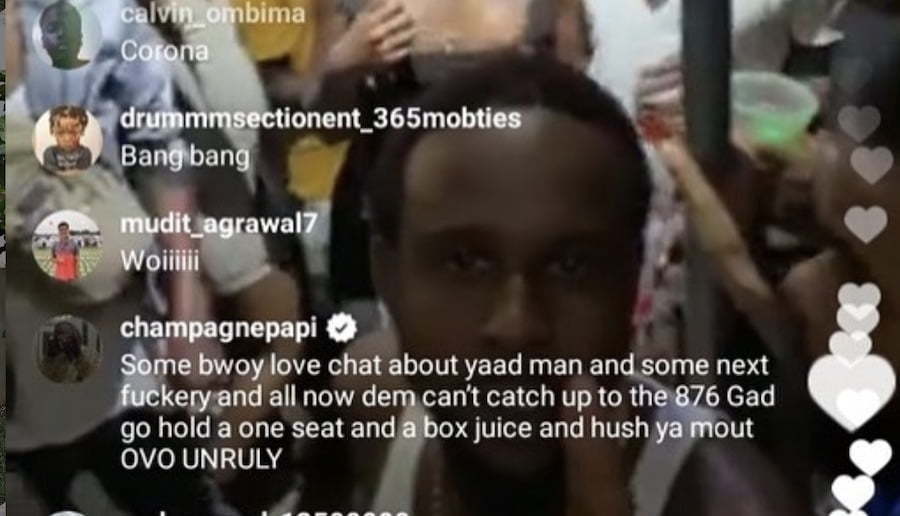 Mavado later fired back with a vicious diss track aimed directly at Drake’s head. “Enemy Line” took Mavado to the forefront of the feud as he deejayed, “Tell soft and fake likkle sheep/likkle Mormon, die trying but you will never be a yard man.” Drake is frequently regarded as a culture vulture as he heavily reps Jamaican culture, and many of his songs are laced with Patois (Jamaican slang) so this was an almost obvious shot at him. Mavado’s diss track was released over a week ago and fans were concerned that Drake had not yet acknowledged the swipe at him, but it seems he did, in fact, listen to track.

During Poppy’s Live, he and Drake are having a back and forth conversation during which Poppy says, “Dem betta level up.” Drake responds, “Exactly, some bwoy love chat.”

A member of Popcaan’s entourage then bellows out, “Platinum in a week.” Drake laughs boisterously at the comment while adding that he will be visiting Popcaan soon, also expressing his love and respect for the Unruly Boss.

However, Drake’s shot at Mavado didn’t stop there as he later added onto his earlier statement going into greater detail. He commented on the Live session writing, “Some bwoy love chat about yaad man and some next f**kery and all now dem can’t catch up to the 876 Gad go hold a one seat and a box juice and hush ya mout OVO UNRULY.”

As you can see, Drake directly quotes the line from Mavado’s diss track, where he cites that he will never be a yardman. Individuals who witnessed the jab at Mavado are not very appreciative of the diss as they say that it is very disgraceful that a Canadian rapper can so easily disrespect a Jamaican deejay and Jamaicans seem to be in support of it. They add that if the shoe were on the other foot and Popcaan was to take shots at international artistes, Drake would not have his back in the same manner.

This latest retort from Drake is a severe diss at Mavado and one that would easily have anyone ready to throw hands. Let’s see what Mavado makes of it as we’re sure he’ll be quick to respond with a direct shot.