Bow Wow came through with a clap back at Timbaland for saying he doesn’t have enough hits for Verzuz.

At this moment don’t hold your breath for a Verzuz battle with Bow Wow. Since COVID-19 heated up and people could no longer go to clubs to see their favorite artists perform, they have been hooked to the Verzuz series created by Swizz Beatz and Timbaland. The online match-ups pitted the best of the best against each other as they went through their respective music catalogs, and one emerged the winner. The events have even broken records with millions tuning in, and won the Break the Internet Award at the 2020 Webby Awards.

Considering that the likes of Snoop Dogg, T-Pain, French Montana, Alicia Keys, Ludacris, and Nelly have all taken part in the series, fans of Bow Wow understandably want their boy to get in on the action. A suggestion which Twitter seems to be behind is the “Let Me Hold You” rapper going up against Soulja Boy.

Oop! #Timbaland stepped into #TheShadeRoom to respond to #BowWow ? Thoughts?

When Bow Wow came across such a tweet, he wrote, “NOT GONNA HAPPEN,” and clarified further in another tweet that he doesn’t want to take part in the series despite previously being keen to. Verzuz co-creator, Timbaland, caught word and snakily suggested, “He mite not have 20 n the bag.”

Bow Wow did not take kindly to Timbaland’s suggestion that his catalog wasn’t extensive enough to withstand a 2-hour music battle and let himself go full shade on “The Way I Are” rapper. “You been drinking too much ciroc,” Bow Wow hit back. “20? Timbo you betta stop playing w/ me. I can give you 10 before I hit my 3rd album. The Bow Wow era was nothing to play w/ Ima let the people tell you about me tho.” 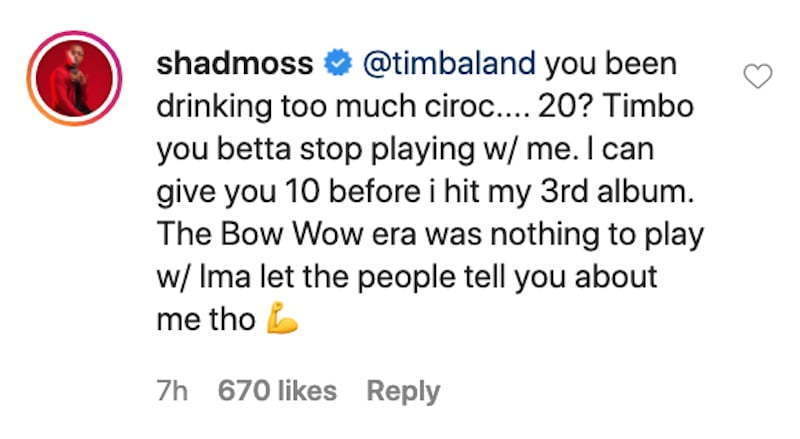 Bow Wow has seven studio albums in his discography but has yet to drop one since 2009.