Sumfest has taken to the digital world, and the first performance night was an epic success. On Friday (July 24), Reggae Sumfest Night 1, dubbed “Taste of Reggae Sumfest 2020,” was live across social networking platforms like Facebook, Instagram, and even YouTube. While there were many skeptics curling their lips at the idea of the biggest reggae festival on the planet being hosted online due to the pandemic, Jamaicans at home and abroad tuned in for the show.

The performers lit up the stage last night with energetic renditions of top dancehall hits, impressive vocals, and spicy dialogue. The lineup included artists like Agent Sasco, Teejay, Shenseea, Ding Dong, Konshens, Ishawna, Daddy1, and more. “Murder She Wrote” hitmakers Chaka Demus and Pliers also graced the stage with a nostalgic performance which showcased to the world the origin of their legendary original track which has been reproduced countless times on a ton of international hit records.

The Shenyeng massive was excited to see the “Blessed” singer resume her craft on the Sumfest stage, which she was noticeably absent from just last year. ICYMI, Shenseea, has been grieving the tragic loss of her mother, who passed away in June. Last night during a post-performance interview, she said she was in better spirits and expressed how excited she was to be back on a stage after the long hiatus that artists all across the world have taken involuntarily during the quarantine period and ongoing pandemic. 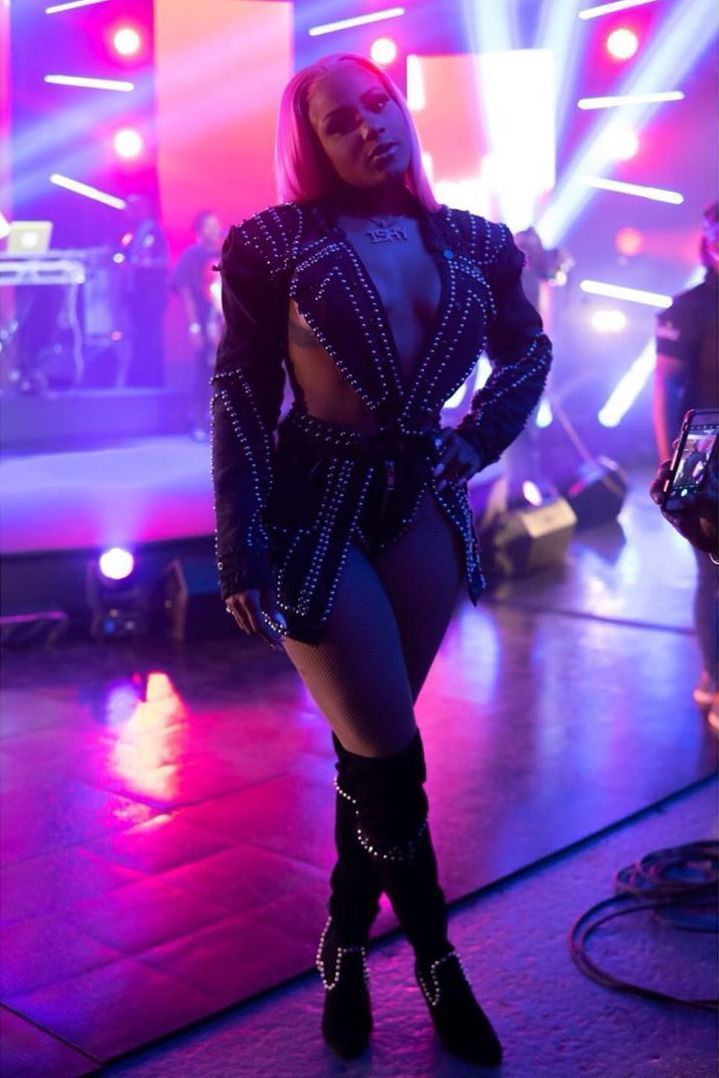 Performing hits like “Blessed,” “Trending Gyal,” and “Trick’a Treat,” Shenseea wowed in her stylish ensemble and her vocal performance. Clad in a classy white long sleeve crop top and orange joggers with white kicks to match, Shenseea owned the stage like any veteran and was visibly comfortable in her element as she achieved some sort of cathartic release from every note she belted out.

Another of the night’s favorite performers was also a Romeich Entertainment artist who hails from Montego Bay, Jamaica. Vocal powerhouse Teejay was on point last night as he made every second of his fifteen minutes count on that Sumfest stage. The Uptop Boss donned a designer shirt that many fans couldn’t help, but notice was in mint condition and speculated that it was fresh off the rack. The deejay rang out hits like “Baller,” “Uptop Boss,” and fan-favorite “Owna Lane.” Fans gushed over his pristine pipes that gave a bit more than expected in his impeccable vocal performance.

While each act performed, their logo hung behind them on the main screen, which did a lot for their branding as well as the aesthetics of the show. Many fans at home expressed online that they were pleasantly surprised by the unimpaired quality of the virtual live show and sound equipment. With Night 2 slated to have performances from Taurus Riley, Sizzla, Koffee and more, the inaugural show was definitely a whet for our appetites.