Bounty Killer lauded Spice as a “super mom” and we can all agree on that.

The ‘real’ Team Spice was on full display on the entertainer’s Instagram page a couple of days ago, when she shared a sweet photo of herself trading smiles with her little ones. The Queen of Dancehall, whose real name is Grace Hamilton, melted hearts in the comments with a touching caption dedicated to the unmoving strength of a woman and the drive to provide for her kids.

“Proud single mother of 2 @official.nicho @toytoyandnicho I do everything on my own with no complaints. Thank you Jesus for having my back. I Love my kids with all I got,’ penned the “Black Hypocrisy” singer.

The post struck a pleasant chord among her over 2 million followers, but one comment stood out above the rest. The original Poor People Governor, Bounty Killer applauded Spice and listed her as a “Super Mom.” Spice blessed the comment with a blue heart[Her favorite color}, after acknowing the comment with, “Yes mi Gena.” In continuation of his praises, Killer told Spice to “Keep up the great works,” and left a rosy red heart. 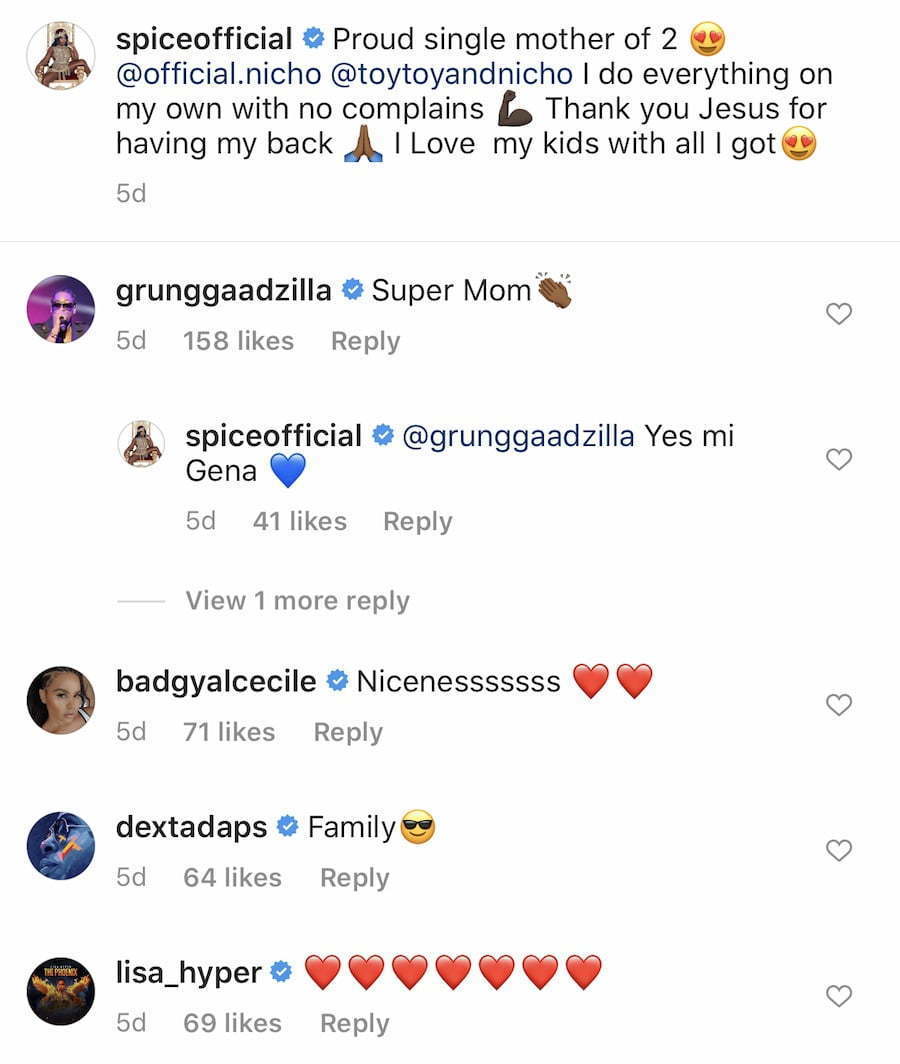 Hamilton has been a stalwart in Jamaica’s music industry for a number of years, cooly securing the public’s vote as the Queen of Dancehall. The entertainer regularly shares her confirmed dates for shows, which sees her being booked for close to every month of the year. With such a hectic schedule, it lends to the question of where does she find time to nourish and bond with her 2 kids? Spice has revealed through numerous videos of her kids enjoying her company at various stages in their lives, that sometimes it is not about quantity but quality time.

Theme parks, fun photoshoots, dress up, and the ever-popular TikTok app seems to be the order of the day whenever Mommy Spice rolls through. COVID-19 has brought about its own set of rules, which has placed a blockade on large gatherings, which converts into a lack of stage shows and performances. It is also halted production of movies and tv shows such reality show Love & Hip Hop Atlanta, where Spice became a fan favorite after joining in 2018. While this period means less bread for the Jamaican entertainer, it also ensures more time to be spent with her small family of two. Nicho and Toya are currently weathering the storm with their mom at her Atlanta home.

Proud single mother of 2 ? @official.nicho @toytoyandnicho I do everything on my own with no complains ?? Thank you Jesus for having my back ?? I Love my kids with all I got?

Bounty Killer, who applauded Spice, also confessed to making the best out of the pandemic. “From the loss of corona I gained some real good quality family time locking in the house for one week str8 was unimaginable all my career AloneTogether,” he wrote in the caption below an image of himself chilling with two of his daughters.