Buju Banton continues to give back to the community in a major way.

Buju Banton’s Foundation has once again made a positive mark on the lives of some of Jamaica’s struggling young males when it gifted footwear and sporting gears [footballs] to the 48 boys who are residents of the Manchester-based Mount Olivet Boys’ Home.

The philanthropist/music reggae music stalwart started his foundation a mere two months after being released from a United States federal prison, where he served his lengthy sentence for drug trafficking. In a statement directly to Urban Islands in 2019, Buju Banton expressed his reasons for starting the project. “I also know what it is to be a youth with big dreams and lots of determination. Unfortunately, daunted and unable to achieve your destiny, due to lack of a helping hand. It is not an easy road, my children,” he said.

A week ago, Buju Banton filled the hearts of the residents of the facility with hope when they, along with Mount Olivet facility representatives, converged at Gargamel Music Inc to accept the gifts, as well as meet the icon in person. 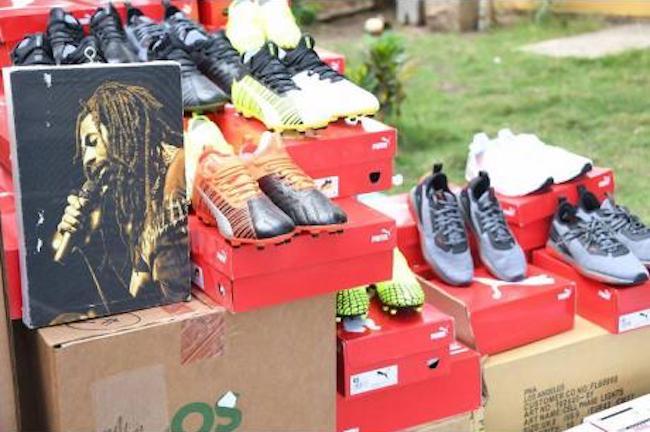 He did not disappoint, providing the youts aged 6-18 with not only 100 pairs of shoes but also a touching speech.

He said, “You should always have hope. Never lose hope. We have to show those who abandoned us that we succeeded. The child the parent abandoned will become the head cornerstone. Respect staff at the facility. As the world out there is cruel, Buju Banton Foundation is trying to be part of the programme of hope and change. Help each other, love each other. Above all, love God.”

Newman welcomed the gifts with open arms and expressed that they could not have come at a better time. “We are indeed impressed with the commitment shown by the Buju Banton Foundation to ensure the boys at Mount Olivet Boys’ Home are all prepared for the new school term,” Newman said. “This latest donation of 100 pairs of shoes could not have come at a more opportune time, and for that we are extremely grateful for your love and kindness.”

The Buju Banton Foundation specializes in helping young males between the ages of 6-18 with tools and opportunities. One of their previous charitable acts saw them conducting a workshop at the Sunbeam Children’s Home in St Catherine. Experienced motivational speakers, Dr. Kadamawe Knife who lectures at UWI Mona and Aubrey Stewart, the chief security strategist at the Ministry of National Security, were both recruited to inspire confidence and hope into the crop of youths.