YK Osiris clearly has his eye on Lil Wayne’s daughter, Reginae Carter, since November last year when he attempted to flirt with her on IG during one of her live-streams. Getting in the comments, the self-titled “King of R&B” referred you Reginae as “the baddest in the game” and also remarked how fine she was. The crush seems to save only grown stronger with time as Osiris has now tried to shoot his shot — right outside her home.

YK Osiris posted a video of himself on Twitter in which he danced next to a moving car, supposedly outside Reginae’s house. The track playing in the clip is his yet-to-be-released single, “Leave Me on Read,” which is ironically a reference to having someone read your message but not replying. 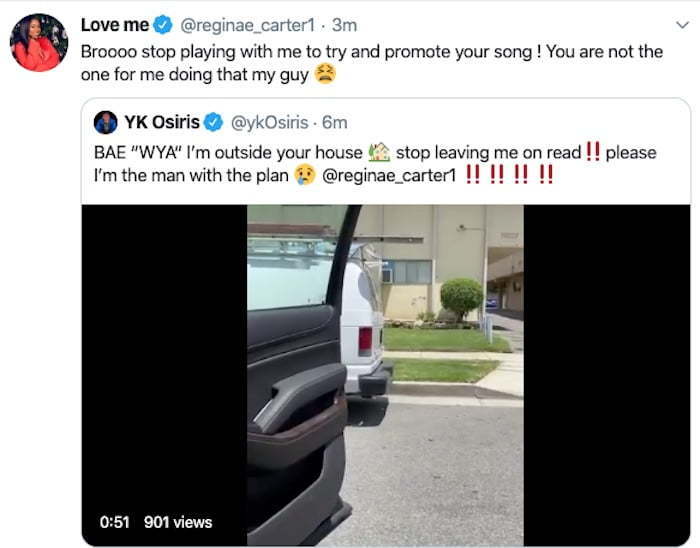 Reginae was clearly not impressed by the “Ride” singer’s efforts, writing in response, “Broooo stop playing with me to try and promote your song! You are not the one for me doing that my guy.” The 21-year-old later deleted the tweet, as well as another that read, “What is wrong with this little boy?” Poor Osiris reposted his romantic appeal, saying he was tired of being left on read.

On Wednesday, the R&B singer pulled up on the Shade Room where he once again shoots his shots. “Reginae, c’mon, just give me a chance,” the singer said. “I’m not like these other rappers. I’m gon’ give you the world. Stop leaving me on read, baby. Please. I know you tired of the bullcrap, n***as doing dumb junk, but I’m not gon’ do it. Yo’ daddy gon’ like me. I’m gon’ give you the world, baby. Listen, and I’m smart. And I love God.”

#TSRShootYourShot— #TSRExclusiveVideo: Now #Roommates, we caught up with #YKOsiris and he mentioned to us that he still has his eye on #Reginae! ?? _____________ So he wanted to make sure that he stepped into The Shade Room to let her know how he feels! Y’all let #Reginae know he’s looking for her ???

It’s the second embarrassing encounter this week for the Jacksonville artist. Last week, Osiris took part in a friendly boxing match with Lil Tjay and has since been challenging other rappers to meet him in the ring. Blueface put his hand up and a showdown took place at the “Holy Moly” rapper’s home in Los Angeles. Blue looked to have taken full favour of the home ground advantage as he left Osiris in the dust.

Perhaps he’ll try and challenge Reginae for her affections.