Tekashi 6ix9ine is clowning Meek Mill for his Billboard debut.

Ever since he came out of prison, Tekashi 6ix9ine has faced a lot of scrutinies and trolling, but he’s also given a large share of it back. The 24-year-old rapper who is clearly growing more and more comfortable with his “rat” status every day, has not let anyone off or held back when it comes time to issue his clap backs.

Meek Mill’s new song “Otherside of America” was released on June 5th, and this week it has emerged on the Billboard Hot 100 chart at No. 64. Tekashi 6ix9ine had a lot to say to Meek, who has been giving him a hard time ever since he’s built a rap sheet for racketeering and snitching on old gangmates.

“This what happens to bums when they don’t have Drake to carry them on they song,” Tekashi wrote in the since-deleted post. 6ix9ine has been sending shots both on social media and in his music. Recently on Instagram Live, Tekashi 6ix9ine called out Meek Mill for associating with a known snitch. This was also alleged by Nicki Minaj who raps the lyrics in “Trollz”: “Talkin’ ’bout snitches when it’s snitches in your camp / Never stand alone, you always itchin’ for a stamp.” 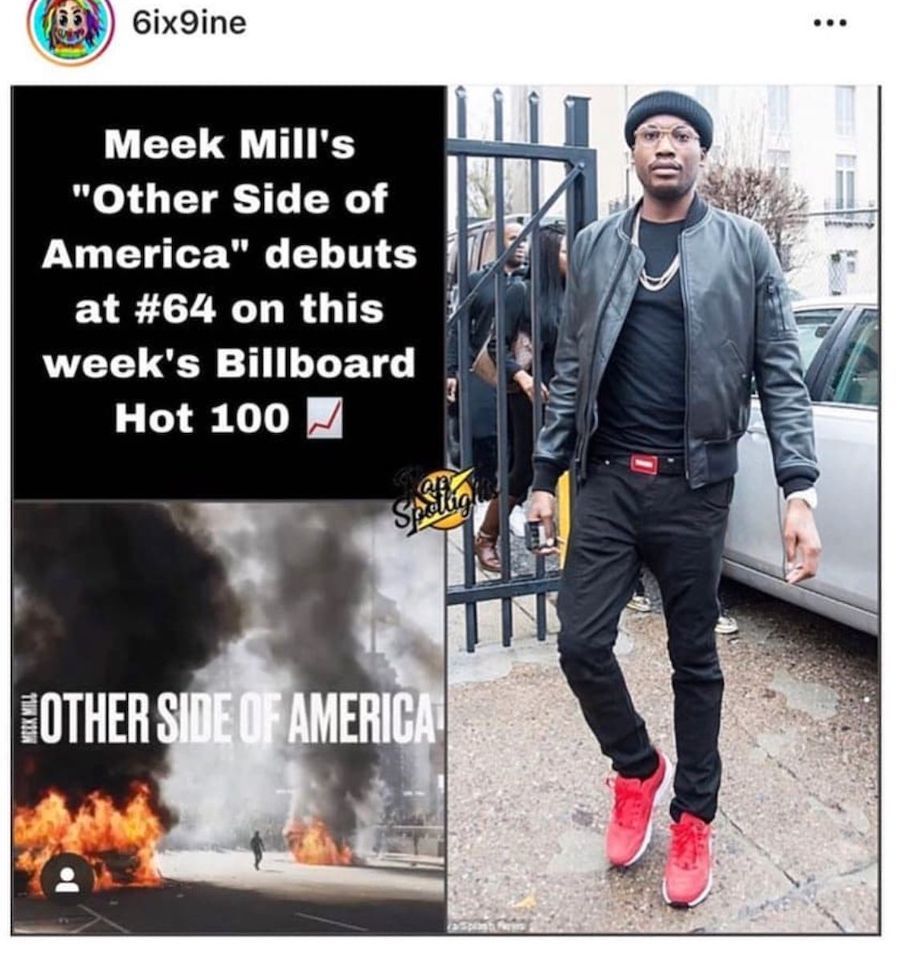 During his Live session, Tekashi 6ix9ine said, “Meek Mill, you can’t pick and choose who you want to call rats. This is public information,” he told Meek, alluding to an alleged ally of the DEA, Roc Nation CEO Desiree Perez, who allegedly cooperated with the federal agency. “Ever since Nicki left you, you are a nobody … Did you forget who you was? I forgot what Drake said, what did Drake say? ‘Was that your tour or your girl’s tour?'”

Tekashi 6ix9ine has been steadfast in his pursuit of his first No. 1 record. Together with Nicki, he is driving a huge promotional package that includes their new song “Trollz” in a bundle with the digital copy and in vinyl form, CD form or cassette form, as well as merch. 6ix9ine has been wearing his “rat” hat proudly ever since his highly anticipated return. Now he says his objective is to prove that you don’t have to conform to succeed.

“I’m going to show you that you don’t have to follow the rules of hip-hop. Be a leader never a follower,” said 6ix9ine. “They wanted me to falloff since 2017 I’m still here 3 years later making the most noise ????????????” The rapper has broken several records since resuming his music career. In addition to making the YouTube Top 20 list for most viewed music premieres in 24-hrs and now holding the record for the YouTube 24-hr debut record for a hip-hop video, 6ix9ine has also managed to break the Instagram Live record for most people in a session with over 2 million concurrent live viewers.

Meek Mill previously said about Tekashi 6ix9ine: “I’m helping free people you putting family members behind bars…I gotta crush you for the culture you chump! How you sleep at night.”

Some fans thought Meek would then be competing with Tekashi 6ix9ine musically or at least calling him out in song. “We control the culture lol and ima set a example lol,” he added. Maybe his new song “Otherside of America” is not that example, or maybe it is. Either way, Tekashi 6ix9ine is throwing shade at Meek for his unremarkable Billboard debut. Who do you think the rapper listened to when he decided to delete his comments?