Drake’s producer Noah “40” Shebib is ranking the Toronto rapper’s albums, but many disagree with the order he chose.

Top-selling rapper Drake’s longtime producer OVO 40 has incited a debate with his latest rating of the rapper’s discography. According to 40, who ranked Drake’s albums from favorite to least favorite, “So Far Gone” sits at the top of his list followed by “Take Care,” “If You’re Reading This It’s Too Late,” “Scorpion,” “Nothing Was The Same,” “Views,” and last but most definitely not least, “Thank Me Later.”

To say that people disagreed with that order would be an understatement. Noah “40” Shebib, who has had an engineering hand in all of Drake’s projects, does have the authority to rank what should be considered his work as well, but even he admitted that his placements were not perfect, in an interview with Rolling Stone.

Head of Urban Music at Spotify, Carl Chery questioned the placement of “Nothing Was The Same” – Drake’s No. 1 album from 2013 that is certified 4x Platinum – which fell in the bottom half of 40’s list. In response, OVO 40 admitted that the list can be considered flawed because it really depends on his mood.

“Yo @carlchery I was driving when he asked that question I would never have NWTS that low,” 40 wrote. “Some days that’s my favourite project we did but it’s whatever lol I have different reasons for why I’m attached to different projects than everyone else and that’s understandable but that list ain’t right I don’t stand by that. 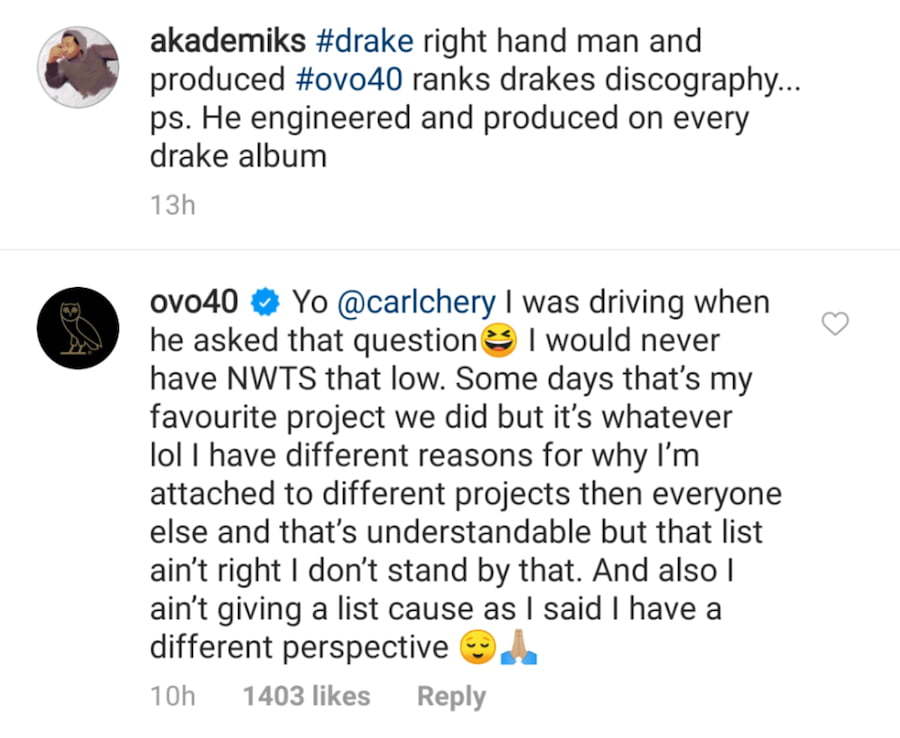 “And also I ain’t giving a list cause as I said I have a different perspective,” he added. OVO 40’s top-ranked project “So Far Gone” was a mixtape Drake released in 2009. It went No. 1 on the US Top R&B/Hip-Hop Albums and the Top Rap Albums chart and peaked at No. 5 on the Billboard Hot 100, but as he mentioned, his favorite body of work is interchangeable.

How would you rank Drake’s albums?