Konshens was forced to fact-check Foota Hype on the Gram for taking credit for a major milestone in his career.

Dancehall deejay Konshens and veteran selector Foota Hype got into a discussion earlier today surrounding who played the most integral role behind launching one of Konshen’s biggest hits, “Do Sumn.” The conversation started after the Subkonshus deejay shared a video of a group of patrons, presumably overseas, jamming to the track in the streets as it is being played over loudspeakers. While many of the comments below the video sang praises to Konshens, Foota Hype decided it was an opportune time to crown himself as the man who brought the song to the public.

“Another classic hit weh mi buss mi love dah video yah send mi it,” he wrote. However, Konshens was not in total agreement with the veteran selector. “No fam… collective effort bus it,” mentioned the “Gyal A Bubble” deejay, before he expounded on the other persons who played their parts in getting the song to the ears and heart of the masses. “Nuff djz and selectors including you and cd mi team burn an gi ppl directly plus the video and the DANCERS!!!” – he wrote.

While Konshens took a blanketed approach in crediting the numerous entertainers who helped, he decided to single out another veteran selector, Likkle Richie, for delivering that final blow that got things buzzing. “but a likkle richie fire di fatal shot fi buss it a JA di real way uppa guiness sounds of greatness him drop it pan dub an mi phone explode!!. Dem time deh mi deh pan tour an di video done bus it out inna di world already.” 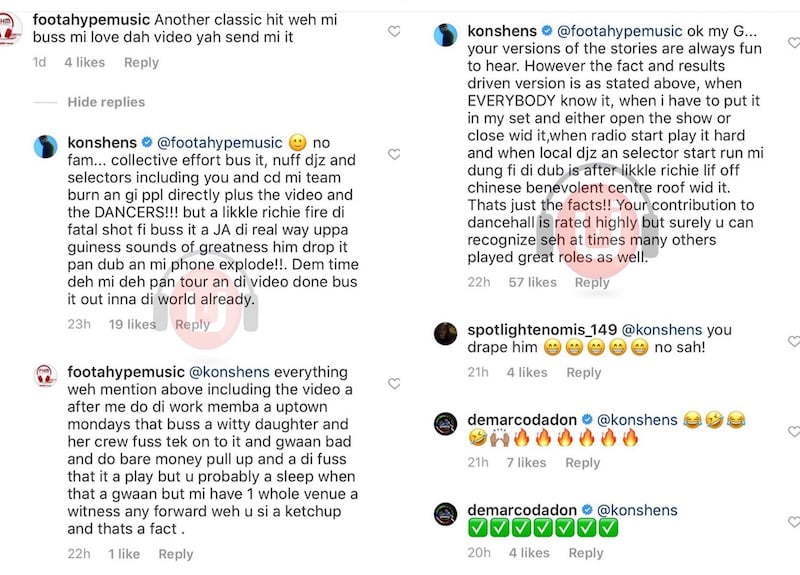 The Guinness Sounds of Greatness competition saw some of Jamaica’s biggest sound systems going head to head to determine who was the most entertaining and clash worthy system on the island. Most times the deciding moment of a clash would be left up to who had the biggest and ‘baddest’ custom cuts of a track, known as a dubplate(dub), in order to one-up their opponent.

Foota Hype was adamant that all that Konshen’s had listed in his previous comment was after he had already blazed the trail while working at Uptown Mondays, one of Jamaica’s longest-running streets dances.

“Everything weh mention above including the video a after me do di work,” he mentioned before giving the gritty details to support his argument, “memba a uptown mondays that buss a witty daughter and her crew fuss tek on to it and gwaan bad and do bare money pull up and a di fuss that it a play but u probably a sleep when that a gwaan but mi have 1 whole venue a witness any forward weh u si a ketchup and thats a fact.”

While Konshens was not in total agreement with Foota, he still decided to accept the account given, stating, “ok my G… your versions of the stories are always fun to hear.”

However, the SubKonshus Music owner still provided a cheeky rebuttal to the claim made by Foota. “When EVERYBODY know it, when i have to put it in my set and either open the show or close wid it,when radio start play it hard and when local djz an selector start run mi dung fi di dub is after likkle richie lif off chinese benevolent centre roof wid it. Thats just the facts!!”

#Footahype claiming credit for the buss of #Konshens hit tune “Do Sum’n” and he claps back. Swipe ?? for comments.

Konshens ended his comment with somewhat of a lesson to Foota, as he asked him to also see the good others have done. “Your contribution to dancehall is rated highly but surely u can recognize seh at times many others played great roles as well,” he said.

Fellow dancehall artiste Demarco, who recently released a track saluting the work done by Bounty Killer and Beenie Man, joked at the situation but was also in agreement with Konshens, as he dropped a plethora of green checkmarks to show his approval.

Another fan questioned why Foota was seemingly seeking special commendation for doing his job as a disc jockey/selector, “Bro you doing your job. You don’t need a medal to do your job. You not the one breaking any records.”

The Gallis Wednesdayz promoter did not share the same views and highlighted the importance of his role as a sound system selector, in making or breaking records. “Tell the artiste voice and build di riddim and keep dem and nuh gi nuh selector and see if hungry nuh kill him and the song dem,” he wrote, which forced his critic to call a truce.

“Do Sumn” was released by SubKonshus Music with production credits given to Ward 21.

You can relive this modern classic through the music video shown below.