Bounty Killer and Beenie Man just made history with the inaugural Jamaican Verzuz battle, but one police officer almost ruined everything.

The highly anticipated Verzuz battle between Jamaican dancehall legends Beenie Man and Bounty Killer was by far the most entertaining episode of the live series event yet. On top of the fact that it was the first genuine soundclash, it got “Verzuz” in the number 1 trending spot on Twitter and “Jamaican” trending at number 3. According to Swizz Beatz, this Verzuz battle also garnered over 470,000 simultaneous viewers, with up to 3.7 million people going in and out of the live session.

The dancehall battle is already being called hands down the best Verzuz battle yet. Swizz Beatz even asked his fellow co-founder of the show how they’ll top it. Unlike the past Verzuz battles, the artists went head-to-head in person and performed live hit for hit. There was a thoroughly entertaining exhibition of old jams, new jams, freestyles, improvs, dubs, police showing up to stop the party, everything that a genuine Jamaican sound clash is about. Swizz Beatz had sent Beenie Man and Bounty Killer some Ciroc courtesy of Diddy, and he was sure it heightened the vibe. “CIROC got them lit,” Swizz wrote in the comments with laughing emojis.

One of the best parts about the Verzuz battle between the War Lord and King Beenie was the comedy that the deejays gave us as a sideshow, not to mention the memes that quickly emerged on Twitter from their erratic dance shticks. One of the celebrities who stopped by for the party was Caribbean native Rihanna, who got a noteworthy shout out from the performers that sounded a bit like, “I just got to big up Riri. She’s on the LIVE. Rihanna you see me me?” Bounty asked. “And Beenie?” Rihanna responded with “Bounty Killaaaaa” in the comments. 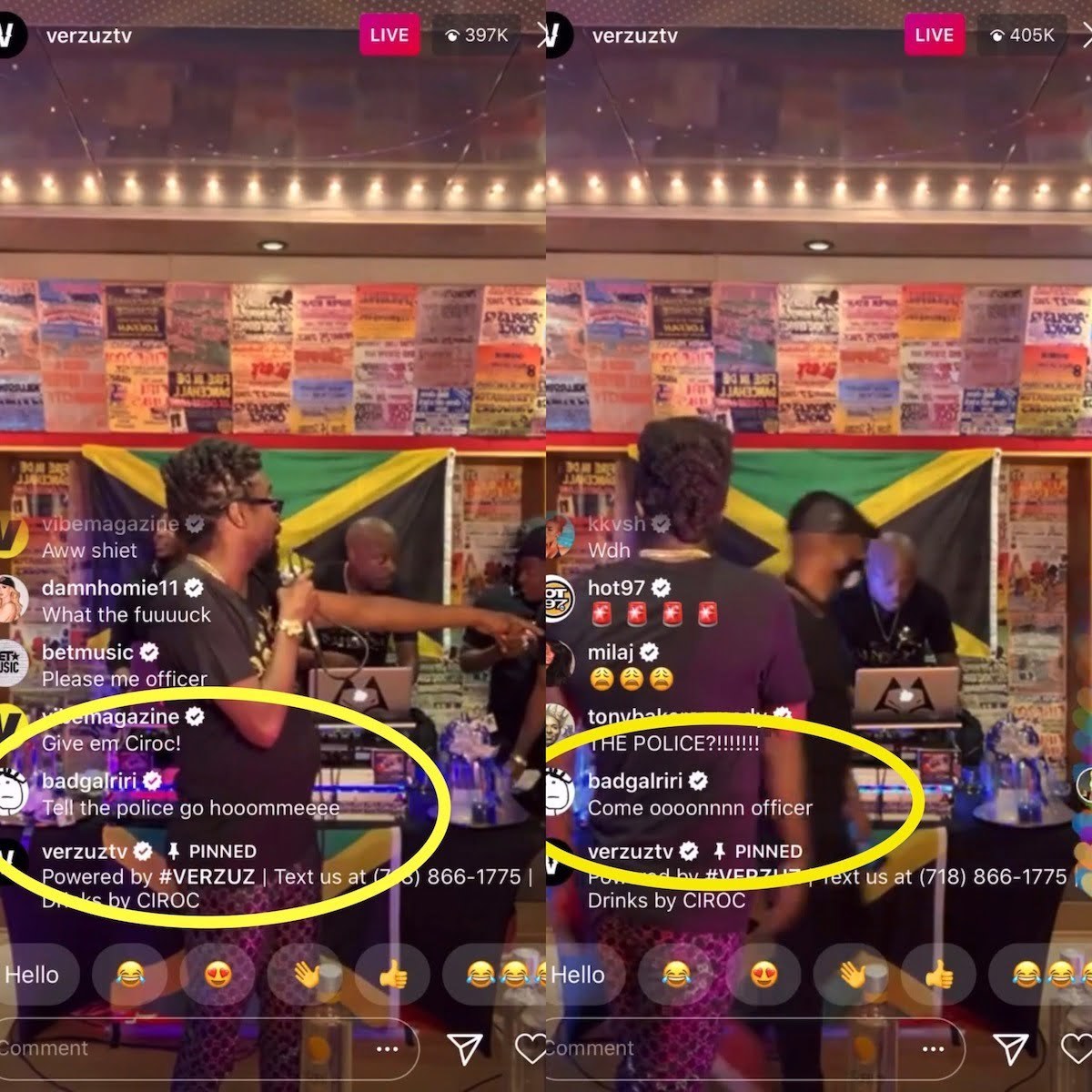 The Bajan singer also made her presence known when she asked the police to leave after they tried to end the party. Beenie Man created another hilarious moment when he asked the officer if he wanted to be “that guy” who shut down a live session with almost half a million people watching. Eventually, they left, and the show went on. It turned out to be so good that Rihanna even asked the DJs to stay after the performance. “I looooove this,” the fashion mogul wrote.

In addition to Rihanna and all of Jamaica, other guests who not just attended but seemed to have a great time were Diddy, Buju Banton, Busta Rhymes, Damian Marley, Usain Bolt, Popcaan, Snoop Dogg, Spice, DJ Khaled, Ja Rule, Ashanti, Amanda Seales, LaLa Anthony, Safaree, and a whole lot more.

Producer and Verzuz co-founder Swizz Beatz put a lot of emphasis on the importance of the educational aspect of this clash of the icons Verzuz. He explained a bit about Beenie and Bounty’s history and also spoke on the contributions that Jamaica has made to not just dancehall and reggae music but the art of music on a whole; and where clashes and battles all got started. He also talked about growing up on Boston Road in the Bronx, visiting Spanish Town, Jamaica, and linking with Bounty Killer, DJing with Scare Dem Crew, and more. Swizz even admitted that he might be more yardie than yankee.

“Jamaica won tonight,” Swizz Beatz said later on during his post-Verzuz Live discussion on his Instagram. According to the producer, he cried while he sat at home and watch because of the history he was witnessing. Not only was Swizz like everyone else who was watching in awe of the actual performance, but he seemed blown away by the numbers. He believes it’s a strong statement that the Caribbean showed up and said they’re just as strong as America.

Now with everyone dubbing this the untouchable, “un-toppable,” best Verzuz battle ever, the stakes are high. DJ Clark Kent told Swizz Beatz that the dancehall legends’ have set a new precedence with their performance. Swizz was quick to agree, adding that he and Timbaland will have to talk about the new bar. Apparently, he thinks all the future competitors should appear face to face like Bounty and Beenie did. “Timbo how we follow up to this one King?” Swizz asked in the comments of the live.

Swizz Beatz agrees that this was the best clash Verzuz battle to date. It seemed to inspire him, too as he even announced in the comments that a Verzuz tour is coming as “soon as life gets back.” In his own live session after the show, he talked about wanting to share the platform across the other nations of the Caribbean. In the meantime, he also called Snoop Dogg to “get ready” for his battle.

This Verzuz battle is undoubtedly one that will be buzzed about for a while. We can only hope that this is the first of many Jamaican editions to come. Do you think the event has impressed a little more of dancehall’s history and culture upon the world?