Future is dropping some new music this Friday amidst more baby mama drama.

There is something special about the feeling one gets whenever Future announces that he has new music on the way. The Atlanta rapper has not only developed a ruthless reputation with the ladies but also a beast in the hip hop game. Many fans are once again getting butterflies in their stomachs with Future revealing that his new album, High Off Life should be available this Friday, May 15, 2020.

Some fans are already calling the 21-track project a classic, and it’s easy to see why. The album art, which was shared on Future’s Instagram Story, shows collaborations from some of the biggest names in the industry.

Travis Scott gets featured on “Solitaires;” YoungBoy Never Broke Again assists on “Trillionaire;” Young Thug does his thing on “Harlem Shake;” Lil Uzi Vert goes in on “All Bad;” Meek Mill and Doe Boy join forces on “100 Shooters;” and Lil Durk gets in on “Last Name.” 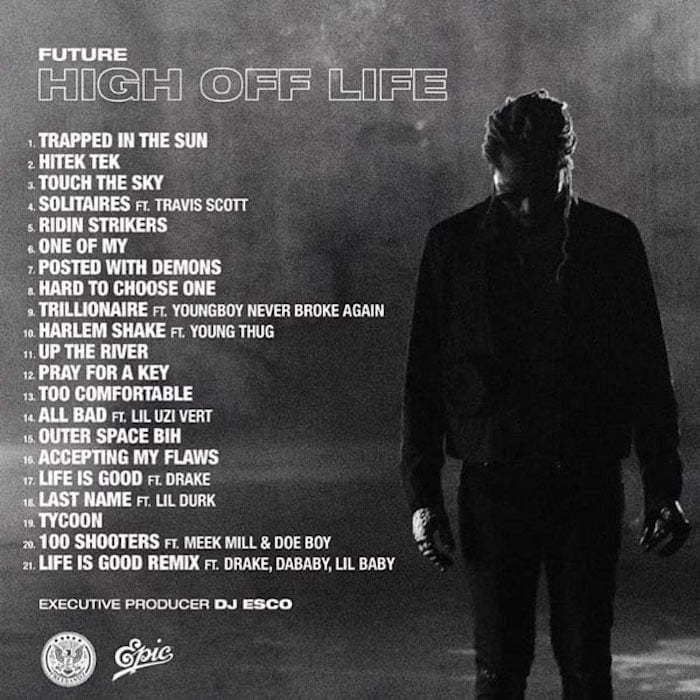 Drake, Dababy, and Lil Baby’s feature on “Life Is Good” and “Life Is Good” remix, respectively, round out the top tier talents on the project. If “Life Is Good” is any indication of the creative genius of the project, fans should be in for a treat. The track was released back in January with the remix following a month later and as since gone four times platinum. Track 19 titled “Tycoon,” also received raving reviews when it was released in late March.

Atlanta based talent Dj Esco, also known as EscoMoeCity, comes through as the executive producer on the project. The collaborative efforts of Esco and Future have brought about some of the rapper’s most legendary projects, such as 2015’s ’56 Nights’ mixtape.

‘High Off Life’ follows the 2019 effort’ Future Hndrxx Presents: The WIZRD’ which became his sixth number 1 album in four years.

Future just learned that DNA test confirmed that he’s the father of Eliza Reign’s child. The Freebandz rapper lash out at her yesterday after hearing the news.

How do you think this 8th studio album will stack up against other noteworthy Future projects?