Alkaline wasted no time dissing Vybz Kartel on Twitter and in a new track “Nah Fi Like.”

Fans are once again weighing in on the ongoing verbal and lyrical tug of war between the Vendetta top man Alkaline, and the newly, self-proclaimed King of the Dancehall and leader of the Gaza, Vybz Kartel. The latest blow to break through the thin layer of peace comes in the form of Alkaline’s most recent release, “Nah Fi Like.”

While the two artistes have been going at each other for a number of years, they somewhat have stayed away from the direct namecalling when delivering on wax. That has seemingly changed with “Nah Fi Like.” During his lyrical onslaught, Alkaline injects the name “Palmer” into what may now be the most replayed line of the track.

The direct line attacks all the dancehall players who claim to be heading the game, dubbing them as liars. “F**ka dem lie wa the Bloodcl***t,” he sings as he adopts a completely new flow. He then singles out and wages a full attack on Vybz Kartel, “Nah get no p***y Addi/Annie Palmer, betta wol yuh corner.”

Alkaline also send a few shots at Vybz Kartel on Twitter after dropping the new single. 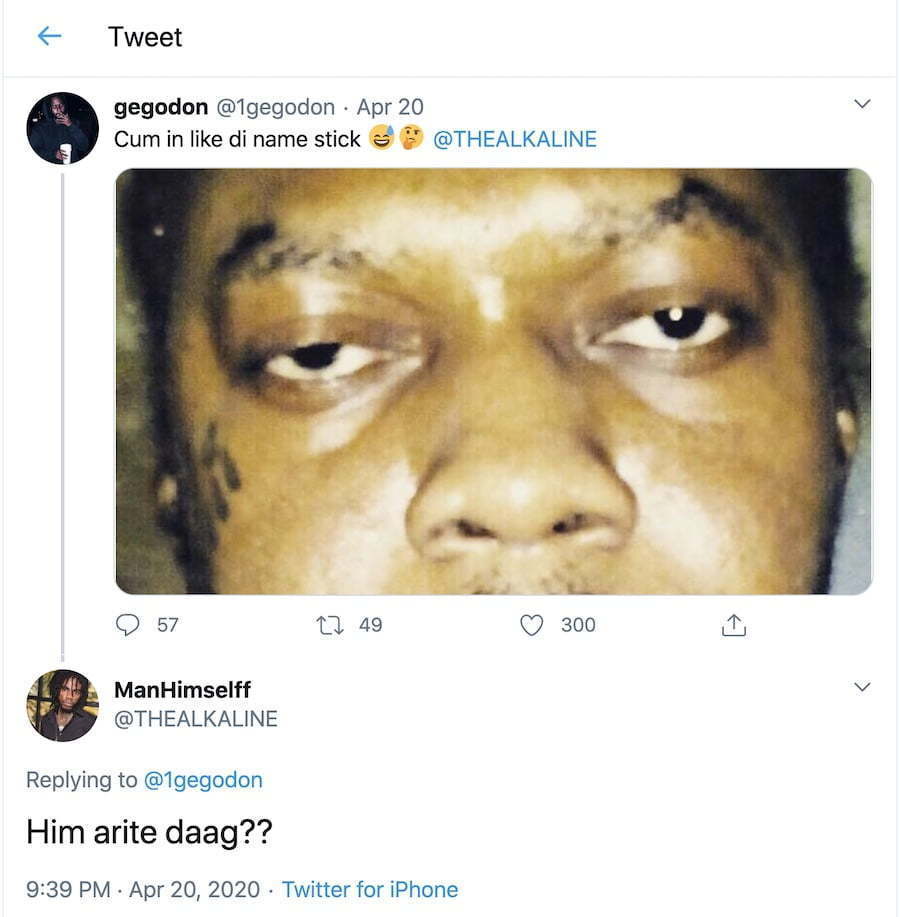 There is still a disconnect between listeners, whether the Detta Boss said Addi or Annie. The name Addi is a shortened version of Vybz Kartel’s legal name Adidja Palmer, which Vybz Kartel himself uses prolifically. Others are convinced that the exact diss clings to ‘Annie’ Palmer, not to be confused with the White Witch of Rose Hall, but more along the line of the colloquial slang for someone who masturbates frequently. This would also be a direct hit at Vybz Kartel, who has been locked away for almost a decade.

Whether it be Addi or Annie, the stooge in Alkaline play on words will not be too happy with the namecalling.

“Nah Fi Like” packs a lot of other creatively crafted lines that run concurrently with the new auto-tuned infused flow that Alkaline employs. The “Extra Lesson” deejay has been testing out a few new flows in his five releases for 2020. Just a few weeks ago, the deejay purportedly offloaded on Mobay based singjay Teejay and Unruly head honcho Popcaan, in his track “Monopoly,” which trodded on a more abrasive line.

“Nah Fi Like” is produced by Studio Vibes Entertainment. The track is already hugging the number 2 spot on the coveted Youtube trending list and seems poised to take on the number one position.

You can check out Alkaline’s newest track below.